I’m at the ISSSP Leadership Conference with Jessica Harper, managing editor of iSixSigma Magazine and Michael Marx, our resident research manager and blogger-extrordinairre. The weather is beautiful – definitely not as green as Seattle, but the sun is glorious. 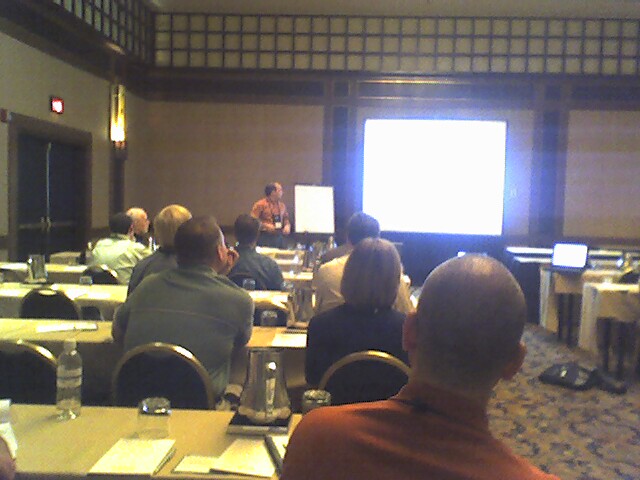 I’m sitting in a presentation by Larry Goldman of Crystal Ball (of Hyperion and Oracle acquisition-fame) entitled “Running Six Sigma Projects When You Have Limited or No Data.” [PDF 436KB] I forgot my digital camera (of course) so throughout the conference you’re going to have to settle for the low resolution camera pics on my Treo phone unless I’m sitting next to Michael Marx.

The purpose of this presentation is how you can run Six Sigma projects with no data. What? Sounds like Larry might be sweltering under this Arizona heat, but in fact he’s talking about Monte Carlo simulation and process models that you can create. He provided an example from a company called Misys where a process can take up to three years. Using Crystal Ball they were able to develop a model, simulate it and be able to optimize their process within hours, delivering improved service to the customer immediately.

Where can you apply simulation?

Larry then went through a full example of a loan process simulation. 91 hours was the base case to process a loan — with a standard deviation of 40 hours. Looking at the sensitivity analysis you can see a certain step represents 68.7% of all variability in cycle time. There were two other delays, but basically the simulation told you enough to go speak to the document verification process to tackle the biggest issue. A separate inventory optimization with uncertain demand example was presented as well.

If you would like to learn more about simulation, you can read an article written by Dirk Jordan of Motorola published a few weeks ago on iSixSigma and entitled “Using Monte Carlo Simulation as Process Control Aid.” If you haven’t taken a look at simulation as a tool for your Black Belts’ toolbox, you should. I used simulation when I was at GE working on my first Green Belt project and it was instrumental to the improvement and savings of the project.

Check in later for an update on the Valuable Connections Reception at The Outback Oasis where I’ll be debating the pros and cons of modeling and simulating an automotive assembly line with a Poisson distribution after I’ve had a couple of drinks. ;)