The following is theOpen Mike column from the May/June 2007 issue of iSixSigma Magazine, entitled “Getting Ahead in Business with Six Sigma.” 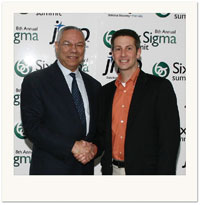 Attending the IQPC Six Sigma Summit in January, I was excited to hear the keynote speaker, and I wondered what Gen. Colin Powell could teach Six Sigma professionals about leadership. He had a lot to offer.

As both soldier and statesman, Powell was a leader in the highest echelons – a four-star Army general, National Security Advisor, chairman of the Joint Chiefs of Staff, U.S. Secretary of State. He is an imposing figure.

Yet the more I heard from this impressive leader, the more I realized that in many ways Powell is just like any one of us. Of course, in his position what was at stake was often a life-or-death issue – a point made painfully clear to him early in his military career by a superior officer.

Powell was running off to “guard an atomic canon,” he said, when he realized he had lost his pistol. He radioed to his company commander and turned himself in. The commander instructed him to complete the mission and report back. Later, the officer told Powell the pistol had been found by some kids. “They managed to get it off safety and fired it,” the commander said. “Here’s your pistol. Be more careful and never let that happen again.”

Powell still remembers how devastated he was. Upon inspecting his pistol, however, he realized that it was, in fact, not fired. His commanding officer had concocted a story to scare Powell and ingrain – not just explain – the importance of monitoring his weapon.

Can you imagine what your business equivalent might be? Could you offer a lesson to your direct reports that was so effective they would recount it years later? Leaders need to make the lessons they impart powerful and personal so team members can internalize them and not repeat mistakes.

Powell told the audience that in some cases the purpose of lessons is to set the tone, to send messages that are proactive. He described his preparation – soon after becoming secretary of state – for a meeting that was to include the president, the vice president and the chiefs of staff. One of the topics was a report-out of activities in a certain part of the world. Powell made a point to select an “action officer” to make the report rather than the commanding officer. Asking the person in the lowest position opens up the lines of communication, he explained.

Powell knew the action officer would tell everyone in his barracks about the assignment, and everyone would help him gather the appropriate data, create the report and rehearse the presentation. He would be bringing his team together.

Powell also knew that as soon as the action officer had given the report, he would go back to his office and exclaim to everyone, “Boy, did I tell him!” It would be clear that Powell considers all the data, not just the data that filters up from his direct reports. That one story about his leadership style lived on until the end of his days in office and was a vivid example of how he wanted his staff to act.

“My goal as a leader is to set the goal, set the mission, but then to empower the follower to achieve it,” he said. “Six Sigma must empower followers to do a good job.”

So the next time you need to rally your troops – to get your employees to follow your direction and achieve the strategic goals you set forth – think about the leadership example of Colin Powell. Even without four stars on your shoulders, you can promote greatness in your team.