Middle manager of a mid-sized business with an average market share makes a New Year’s resolution, “I must improve our performance!”. Hits the Internet to discover what’s out there and is absolutely bombarded with the latest thinking and best practise in how to improve their business.

Given the number of options, it should come as no surprise that without clear executive sponsorship, managers looking for “home-grown” solutions could be reluctant to invest any time in Lean Six Sigma. There are any number of good reasons not to get involved. Gianna is currently on reason number 37 and still counting!

Even if they focussed on continuous improvement there is a lot to choose from e.g. Lean, Six Sigma, ISO, MBNQA, TRIZ, TPS, EFQM, TOC, TQM ….no, this is all too complex, not today thank you, I’ve got some fire-fighting to do!

Name a soft drink, quality automobile, or MP3-player and it brings to mind an immediate response. I think we have achieved a high degree of customer mind share. But in what categories should Lean Six Sigma hold mind share? Product Launch; Business Strategy; Performance Management, Innovation, Profit?

Our technology is proven and the tools work. It seems a question of marketing. I’m reminded of the early works of Geoffrey Moore like Crossing the Chasm. How do you cross the chasm from being a product used by selected niches and specialist areas into a de facto business tool? 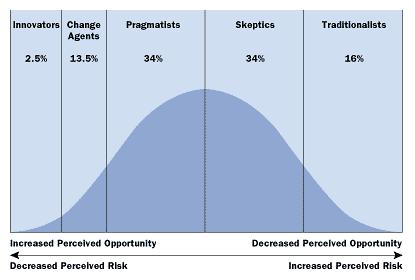 The move into mainstream is about making Lean Six Sigma easy to do business with. One aspect of this is standardisation. I will draw on a couple of examples from the IT industry.

This relentless standardisation has continued in spreadsheets, word processors, operating systems, databases, and ERP systems. Mainstream customers like a dominant player (800lb gorilla) with a second choice in case they fall-out with the gorilla.

Another aspect is simplification (I discovered there is a Six Sigma for Dummies). Mainstream customers like simple messages and easy to follow processes. What would constitute the core of Lean Six Sigma without affecting integrity? Would it be suitable for a mainstream audience?

I believe an industry designed “Sigma Lite” that is ratified by say ISO would be a step in the right direction for customer adoption. This would draw on all best practice (including ISO 9004) to produce a cut-down version for the mainstream.

Of course every consultancy will challenge this to describe how they are better than the average. Not sure if the Six Sigma Green Belt is already the lowest level of abstraction to support continuous improvement?