Any seasoned Lean Six Sigma professional can tell you about the fruit tree of quality. At the bottom of the tree there is fruit festering on the ground which represents “just do it” kaizen and bare bones problem solving. As you move up the tree, you can begin to pick the low hanging fruit by utilising Lean tools with a sprinkling of Six Sigma. The middle of the tree signifies Six Sigma in its unadulterated form- this is where you break out the statistics and you can reap big savings as a result. Lastly, fruit residing in the top echelon of the tree can only be picked via robust design (i.e. Design for Six Sigma).

Many of you (including myself) were involved in Six Sigma deployments that began nearly a decade ago. In my case, the tree was there but the expectation was to use Six Sigma to harvest all of the fruit, with little regard to Lean or other quality methodologies. Because there was so much fruit, Black Belts had high expectations for cumulative project values and in some instances projects could be completed within a matter of weeks.

In my case after about five years of utilizing Six Sigma, solutions had been implemented for many major problems and some within the organization were questioning the validity of continuing Black Belt roles on a full time basis. Robust projects utilizing trials and Design for Six Sigma work tended to take longer than the average Six Sigma project. Value for work was moving from black and white hard dollar savings to a more abstract value.

Does any of this sound familiar to you? One of the key concerns for a mature Six Sigma organization is the point where it feels it is squeezing a lemon that’s out of juice. If you feel this scenario applies to you, I’d like to recommend the following advice.

Complacency is not an option. The processes you have now, no matter the sigma level, will unlikely be considered competitive ten years from now (and this applies to everything from software system design to manufacturing processes). When you pick fruit, it can grow back and when this occurs, it is never quite identical to its predecessor. Most things change over time and with that mindset, Six Sigma can take a proactive (and not reactive) approach to problem solving.

You don’t always have to pick the tree in an upward motion. Sure, it’s great to be a Black Belt who can claim a million dollar savings on a single project, however the more mature an organization is utilizing Six Sigma, the more elusive this type of fruit becomes. Yes, you may still be able to find value, however you may have to look down the tree. This is especially true in organizations where Six Sigma was implemented prior to Lean Manufacturing. Rather than picking a single, large piece of fruit, you may need to pick several smaller ones to equal the rewards. The projects can be grouped in a cluster around a common problem. You may also need to expand the traditional Six Sigma project team to include additional improvement practitioners from Lean and other disciplines such as capital.

Establish a cost pool to draw from. One of the tasks when defining a Six Sigma project is to estimate a financial value to justify the project. The ripest fruit in the middle of the tree is generally linked to hard value such as added production, reduction in headcount, etc. and can very easily be calculated. Move in either direction and the value of the fruit becomes more abstract. I have seen some corporations where these projects can be worked with a “soft savings” undertone, meaning there is an inherent value that is understood to be good for the business but may be difficult to quantify. However, if you work for a company that must show a financial impact to the bottom line, my recommendation is to establish a Cost of Poor Quality (COPQ) or Cost of Non Conformance (CONC) metric. These metrics can be individual for department or a single value for the entire site. Rather than focusing on how much a single project will achieve in value, the metric value can be tracked on a monthly basis to compare performance with the prior year’s costs. For example, while working a project to reduce staff turnover may be difficult to financially validate (especially in a short timeframe), the work can feed into reducing COPQ costs for Human Resources which may include things such as relocation expense for new employees, costs for processing exit interviews, etc.

As I noted earlier, when you pick fruit off a tree, it can grow back. It may grow in a different location or may be slightly different in appearance, however it doesn’t necessarily mean prior Six Sigma work was unsuccessful. As a Six Sigma practitioner, your role is to continue picking the fruit. This may mean searching both up and down the tree. You may need to get others to help you collect it and you may also need to utilise additional tools for harvesting. You may even need to incorporate a new method to store its value. Just remember- as long as there is fruit on the tree of quality, there will always be a need for Six Sigma within organizations. 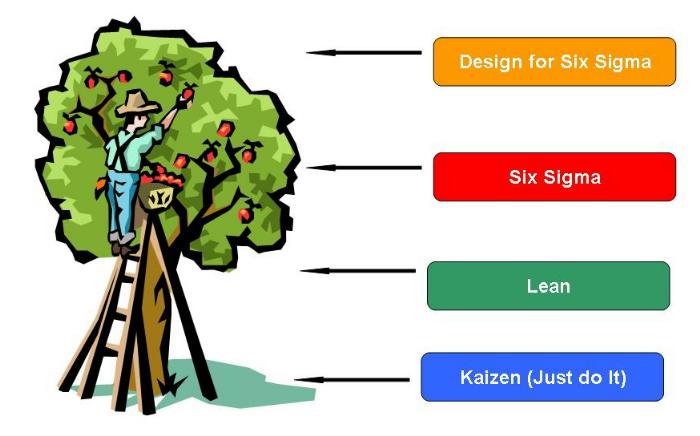