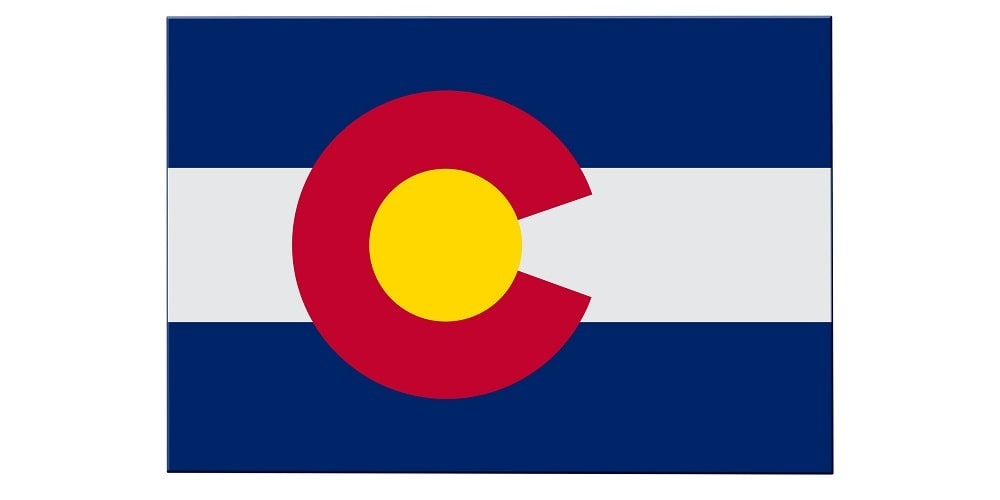 The Colorado Department of Transportation (CDOT)’s Lean Everyday Idea (LEI) program has successfully implemented over 345 ideas as of fall 2020. In the summer of 2020, CDOT worked with staff across the state to implement eight of those ideas over three months – otherwise known as the “Summer of Spreading Innovation Success.”

CDOT’s LEI program has been successful since its inception in 2013. The program is based on fixing ideas that “bug” you and focusing on continuous improvement. The LEI program at CDOT is a form of Kaizen (a Japanese business philosophy regarding the processes that continuously improve operations and involve all employees). These LEIs are innovations and improvements where one person (or a small group of people) will identify a problem or opportunity, develop an innovative way of doing something better to solve that problem or seize upon that opportunity, and implement the improvement. The innovations and ideas are the embodiment of “everyone, every day, improving every process and every product, to benefit every customer” – a CDOT slogan.

CDOT has around 3,300 employees in over 200 different staff locations across the state, which can make sharing information difficult. The dispersed staff has been the biggest challenge to the LEI program. How do you increase statewide awareness of these ideas and encourage others to implement the ideas themselves?

To address this challenge, OPI started the first-ever Summer of Spreading Innovation Success to encourage the replication of improvement across the state. Eight ideas that focused on maintenance innovations were chosen out of 345 in the database. Each idea was focused on for two weeks and implemented, with the first iteration starting July 20th and continuing through the end of October. These ideas range from improving plow equipment to protecting rodder hoses. Not only do these ideas have the potential to save thousands of dollars, but they also increase efficiency and ease of the many tasks that the Maintenance staff does to serve Colorado. LEI “Cards” were created to highlight the selected ideas (see Figure 1) and communicate the improvements. 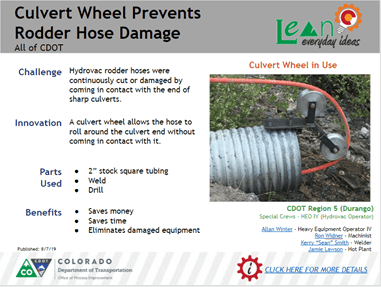 To further communicate the improvements, the Office of Process Improvement (OPI) created short five- to seven-minute video interviews with the innovator and another CDOT staff member. These videos were shared throughout the state via newsletters, the CDOT website and external websites such as LinkedIn. During the videos, the innovator shares how and why they came up with the idea, how to recreate it and the various benefits to the department.

Figure 2: Screenshot from an LEI Interview

Superintendents and maintenance supervisors played a crucial role in the communication of the Summer of Spreading Innovation Success. Often they played the second interviewer role in the videos and curated conversations on how to continually improve CDOT and why continuous process improvement matters. They also helped distribute the videos. The OPI team acted as a host for the interviews and helped circulate important information.

As the first Summer of Spreading Innovation Success ended, the program feedback has been positive. Many innovations were implemented statewide for the first time. More employees gained familiarity with the LEI website, and OPI believes it has sparked some creative inspiration across the state.

In the spirit of innovation, the OPI team is already looking at how the project can be improved for next year. Some ideas are to make sure that all ideas can be equitably transferred across different sections of the state. For example, the team did not learn until mid-summer that one innovation would not be as useful in all parts of the state because a piece of equipment isn’t found statewide.

Additionally, some challenges were unexpected. For example, this year snow arrived in Colorado much sooner than years past. Clearing our roads and keeping the traveling public was CDOT’s top priority. The OPI team was unable to involve certain stakeholders as much as they were tied up with immediate snowy needs. Also, Colorado dealt with fires across the state this summer. As is to be expected, these natural weather events took precedence over improvement news.

However, OPI has achieved its goal of increasing awareness of the LEI program, increasing safety, and saving time and money across the state.