The streets of the French Quarter are no doubt still packed with happy Saints fans following Sunday’s surprising and convincing win against the favored Colts. As first-time champs, it’s a feeling the players and fans will never forget. We at iSixSigma are also enjoying the afterglow of a first-time Bowl event: iSixSigma’s Project Bowl contest, held last week at the Summit & Awardsshow in Miami.

The Project Bowl, held on the first day of the conference, Feb. 1,pitted teams oftwo or threeSummit attendees against each other in a race to see who could completea DMAIC project simulation the fastest and present a final tollgate at the endof the day.All told, five teams joined the fray–four whohad pre-registered for the Project Bowlandone “pick-up” team that joinedat the Summit. Thecleverly named participants were:

The teamscompleted a modified SigmaBrew simulation, made possible by the work ofthree sponsors: CS International, MoreSteam.com and Minitab. A wireless connection was provided for the participants, who were allowed to choose the statistical analysis software of their choice. The official time of the event was from8 a.m. to5 p.m., with a break for lunch provided. Butas the tension mounted and the deadline drew near, fourof the teams decided to skip lunch and keep on working.

By 4 p.m. the teams made a presentation to the judges and a winner, the team from Best Buy, was announced on Wed., Feb. 3, during the awards ceremony, where the three team members went home with the first annual Project Bowl trophy. Those who did not walk away with any hardware, however, should also be congratulated for a job well done. One teamsaid it plans to keep working on the simulation and finish it afterthey’re back in the office. 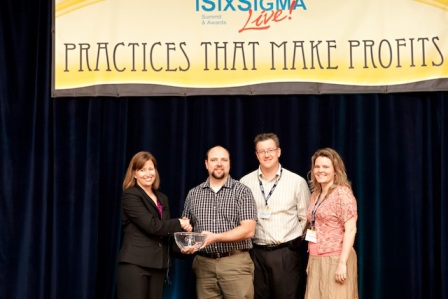 Project Bowl I is now history. But no sooner was the event over when talk began about plans for the next competition. During Monday night’s reception,many participants could be overheard offering suggestionsabout how to make Project Bowl II even better. Stay tuned to the iSixSigma Live! site for more details later in the year.