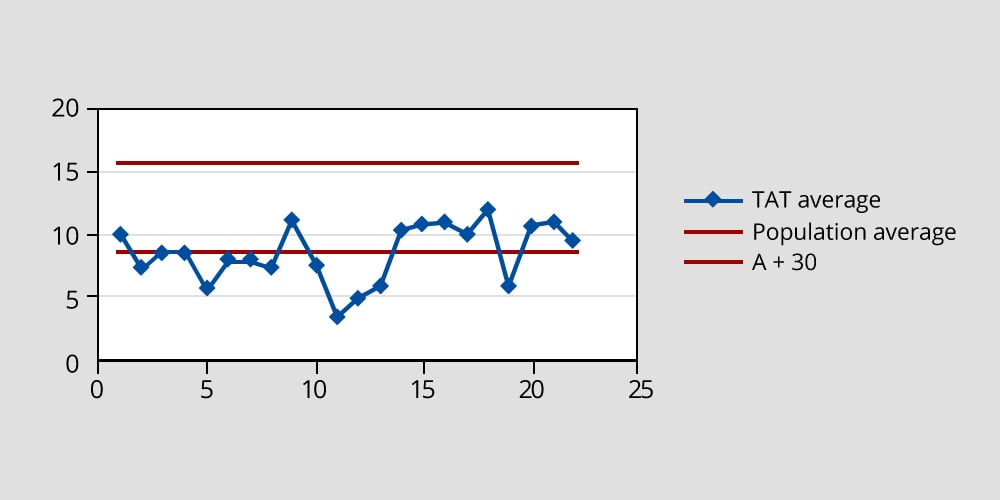 This now five-part case study focuses on improving customer satisfaction at two of a company’s diagnostic clinics – Centers A and B. In Part One, the company worked at Center A to reduce patient turnaround time, a defining component of patient satisfaction. In Part Two, the chain’s improvement story focuses on increasing patient delight at Center B. In Part Three, the story returned to improving the processes of the lab in Center A. In Part Four, turnaround time in a new centralized laboratory is improved. Check back next Monday for Part Five.

A chain of medical diagnostic clinics was developed from the ground up. After two years of hectic expansion marked by acquisitions and setting up greenfield clinics across a number of cities, it became clear that due to the different inherited processes across those acquisitions, the chain needed to focus more on improving and standardizing the quality of service offered, and improving its customer satisfaction rankings.

After successfully improving the processes in laboratory of Center A, the chain of medical dianostic clinics wanted to move forward with improving the turnaround time (TAT) in the newly established centralized laboratory servicing the 62 individual lab centers.

A cross-functional team was set up to undertake the project.

The group brainstormed a list of 52 problems related to the laboratory (see Appendix 1). Discussions revealed that most of the problems listed were causes of problems rather than problems in and of themselves. There were only four “real” problems:

These were prioritized to select the “vital” problem using a weighted average table. Scores indicated that delay (i.e., TAT) was the vital problem. The next step was to measure the problem.

Turnaround problems can be resolved using just-in-time (JIT) techniques. Here, this involved deciding at the outset the start and end points of the process for which the TAT was to be reduced.

The 30,000-foot-level process steps were listed and are shown in Table 1. Also shown are the various start and end points of the project that could be followed.

Table 1: Process from Patient Arrival to Getting Test Report

The concept of sigma was introduced to the team to measure variability in addition to the average. The average and sigma for the current state TAT was calculated as follows.

The logistics time was found to be 2.5 hours to 3 hours within the 15.9 hours average. The team set an objective of reducing the average TAT by 50 percent – from 15.9 hours to 8 hours.

A control chart was developed to track the TAT. The initial chart is shown in the figure below.

Another metric was also introduced – the percentage of reports completed/returned to patients in a 24-hour period of time. Existing data showed that this was at 76 percent.

The next step was mapping the current state process, by looking at:

From there, the future state process map would be developed while applying the following techniques to reduce work in process (i.e., waiting time) and, therefore, TAT:

The volumes to be processed were based upon the Center’s past data and growth projections. The target volume to be processed was 50,000 tests per day. Since different tests require different equipment and times, it was necessary to ascertain the ratios of the tests required to be able to make all of them flow (Table 3) based on 25 working days per month.

Arrival patterns were studied by the hour for four days – for all samples, with blood and urine samples separately (the most common tests and the majority of tests ordered; see details in Appendix 2) – and are shown in Table 4. All patterns are based on 12-hour increments in time.

Next, it was time to look at testing capacity. A list of all equipment was prepared according to section (e.g., biochemistry, hematology, etc.). Against each test the information shown below was assessed:

The results of an equipment capacity analysis helped explain the processes, the capacity, degree of automation/manual work involved and the batch/flow nature of the work.

The following process was used to develop the improved TAT process:

A green channel run, where the process is carried out without waiting between any stages of the process, was performed. TAT was obtained. Then, the team repeated the process for batch after batch to obtain the best possible TAT.

To determine a machine/section-wise load, the team needed to determine the number of tests expected per day in each section. This required estimations as follows:

Armed with this data, the green channel run was first piloted and then standardized in each section. For this article’s purposes, consider the example of biochemistry (a category of tests) with the maximum number of tests.

The process and the load – patients, samples per patients, tests per sample and the time per stage – are summarized in Table 5.

The centrifuge was the bottleneck and was the pace setter for the biochemistry process. It holds only 16 samples at a time and this was, therefore, selected as the minimum batch size. Loading it with minimum interruption provided the maximum output and last TAT.

The process was run, timed and studied in several trial runs with improvements built in and tested in each run. The results of two trials are detailed here.

The results are summarized in Table 6.

Against the ideal time of 24 minutes and expected time of 30 minutes, the actual time achieved was 79 minutes.

Avoidable reasons for the long actual time were:

The achievable cycle time was 57 minutes.

The results are summarized in Table 7.

The run was completed by 1:30 p.m. With the peak time load processed early, the rest of the tests running in the afternoon were easy to manage.

Several improvements were implemented that had significant results.

The results are shown in Table 8.

When it came to the time lost in various tasks in the process, there were a couple of areas of concern that were quickly addressed.

Addressing of these types of problems continued over several cycles. Two other examples were:

The above trials and improvements were spread over three days. A summary of the results follows.

The head of the laboratory shared a great compliment: “I used to chase biochemistry; now I have to chase other departments!”

Saturday mornings always presented peak load challenges as this tended to be the day of the week with the greatest number of patients. The first Saturday using the new process flow system produced the results shown in Table 9.

The efficiency of processing was more than 90 percent.

By 1:00 p.m. the peak load had been processed and the worst was over.

The key objective – having 100 percent of the samples received in the morning getting their reports by the end of the same day – was achieved. Approximately 70 percent of the afternoon samples (fewer in number than what was received mornings) were completed by 7 p.m. The reports for those samples were ready to be given to patients by late evening.

Additionally, the revised process made the work easier, easily absorbing peak loads while dramatically reducing the overtime of staff and releasing capacity during the afternoons for additional samples to be processed.

The control chart was found to not be required and was, therefore, discontinued.