Merriam-Webster’s dictionary states, “skepticism implies an unwillingness to believe without conclusive evidence.” Sometimes a little skepticism – or at least curiosity – can be a healthy thing. For instance, one should probably not begin taking a new medication without asking a few pertinent questions such as, “What are the side effects,” “How will this interact with other medicines I’m taking,” “Is this the most effective treatment for my condition,” and “How often or how long should I take it?”

In search of conclusive evidence on the subject of Six Sigma in healthcare, skeptics have raised concerns regarding the applicability of this approach to the delivery of patient care. This is not surprising, given the variety of improvement initiatives the industry has seen over the past two decades. Doubters should demand answers to questions such as, “How can this affect quality or reduce medical errors,” “What resources will be required,” “How will physicians and other clinicians respond,” “What benefits (tangible and otherwise) can we expect to see, and when,” and “How is this different from anything else we’ve done, such as TQM or PDCA?”

“Evidenced-based medicine tells us what is needed to improve clinical outcomes, but Six Sigma provides a road map of how to get there.”

It’s not the intent of this article to answer the question, “Why does healthcare need Six Sigma?” or chronicle the various challenges facing the industry. These topics are already covered extensively in other publications, quality conferences, websites, panel discussions and boardrooms. If you are a stakeholder in the system (and all of us are, in one way or another) you’re already familiar with the problems. Suffice it to say that yesterday’s management models will not resolve today’s cost and quality issues.

It’s also not necessary to offer untested theories, or references to industries that have nothing to do with the medical world, as proof that Six Sigma works in healthcare. There are plenty of case studies from actual provider organizations that attest to the viability of this approach and the sustainability of the results.

Without attempting to answer every question that may arise, let’s begin with responses to areas of concern most commonly expressed by skeptics:

Language Barrier: Some question the language associated with Six Sigma, specifically troubled by titles such as Green Belt, Black Belt and Master Black Belt. Without debating the merits of martial arts, there is a far more important point for discussion. If Six Sigma is actually working to solve common problems in our healthcare system, does the terminology really matter? Speaking from the patient’s perspective, they can call themselves “Jedi Knights” if it means that my hospital experience is safe and successful.

Non-Healthcare Origin: “Not invented here” (NIH) is a common syndrome that can slow the wheels of progress to a grinding halt. While it’s true that Six Sigma originated in a manufacturing environment at Motorola, it is a proven methodology that is successful when applied to virtually any process. Furthermore, it was adapted to meet the special needs of healthcare providers. Since 1998, experts from GE’s Performance Solutions team – proficient in both process improvement and medicine – have partnered with hospitals to reshape Six Sigma, blend it with cultural strategies to address the human elements of change, and apply it to a range of clinical and operational issues. The results prove that best practices can indeed be shared across industries.

Cost/Effort to Implement: The cost and effort to implement Six Sigma varies depending on the size of the organization and the extent of the deployment. A serious commitment to improve quality, realize significant savings and change the culture will naturally require time, money and resources. If implemented appropriately however, the investment will return benefits that far outweigh the cost. Benefits are measured in reduced expenses, additional revenue, increased client satisfaction, higher quality and improved productivity. Tracking success over time through the use of control charts, dashboards or balanced scorecards allows the organization to gauge ROI as well as the overall value of the initiative. Chief Financial Officers often show enthusiasm for Six Sigma, and it’s easy to see why from the sampling of results in the following table. 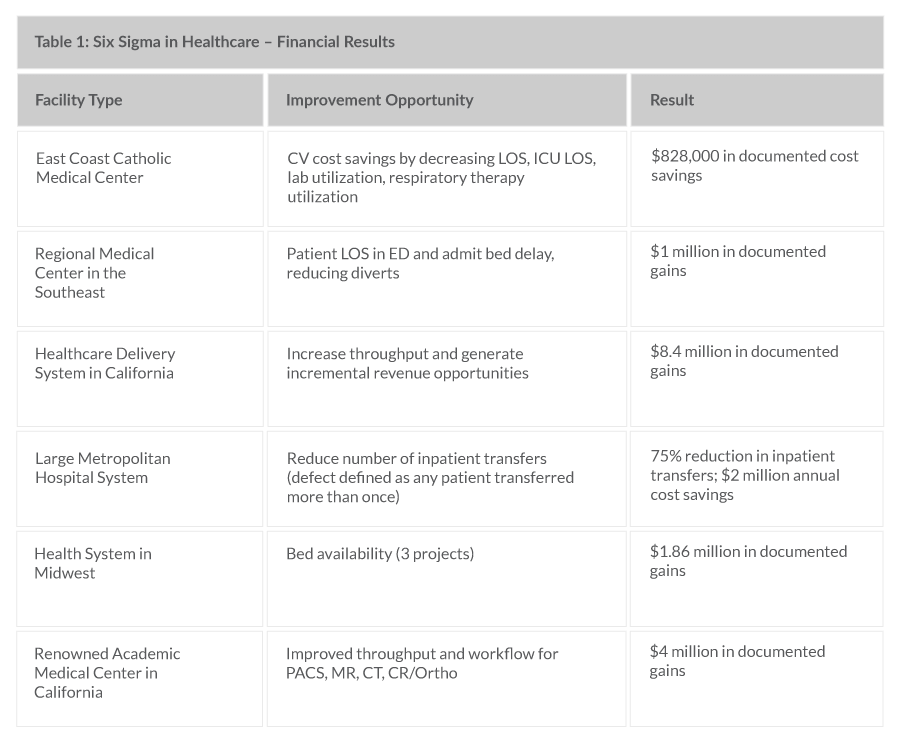 Physician Acceptance and Clinical Usage: The most dramatic conversions in healthcare organizations are often seen among physicians and nurses, who approach the subject of Six Sigma with an early twinge of cynicism (prompted by previous encounters of the quality kind).

They frequently become fans before a project enters the Control phase. This turnaround is attributed to the validity of the statistical process coupled with the application of change management techniques.

Clinical examples of Six Sigma include a reduction in the rate of hospital-acquired bloodstream infections, better outcomes for invitro fertilization and improved safety for heparin administration. Physicians applying the methodology within their own practices have come to appreciate the complementary balance of science and art in both medicine and Six Sigma. As Dr. David Keefe noted at Harvard’s recent Quality Colloquium, “Evidenced-based medicine tells us what is needed to improve clinical outcomes, but Six Sigma provides a road map of how to get there.”

“Flavor of the Month”: Once they’ve seen it work, some of the most tenacious skeptics have relinquished their feelings that Six Sigma is simply the “flavor of the month” and not worthy of their time and effort. Unlike other initiatives, Six Sigma is usually implemented with strong leadership support, aligned closely with strategic objectives and designed to produce results that are significant and sustainable. While there are similarities with some aspects of TQM, CQI and PDCA, Six Sigma takes quality efforts to a whole new level and seeks to ensure they are also financially beneficial. 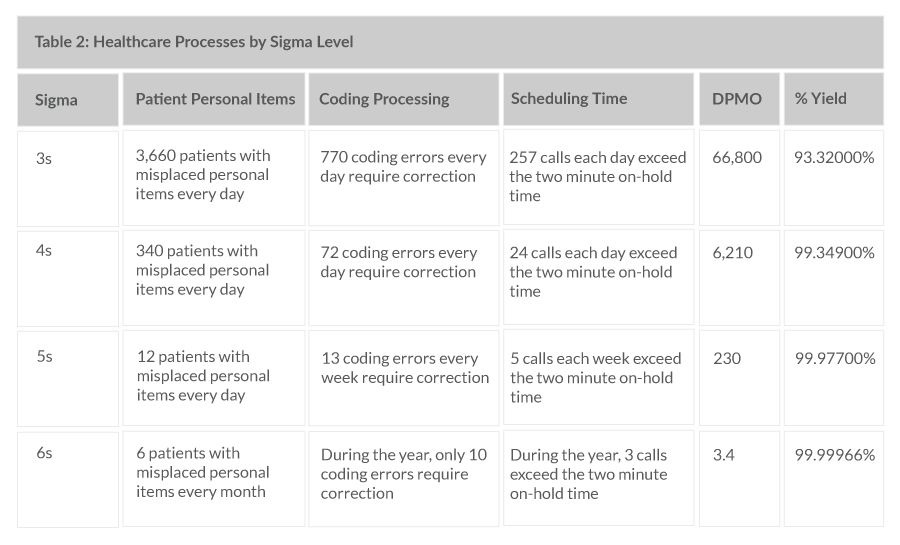 Healthcare organizations that have adopted Six Sigma include:

Even the most ardent Six Sigma fans should view questions from skeptics as a chance to present evidence supporting the use of Six Sigma and change management techniques in healthcare. Six Sigma makes it easier for people to do the right thing by identifying and removing the barriers to excellence.

Without valid data and analysis to understand root causes, people are generally left to speculation and intuition, a situation where variations in perception create unnecessary difficulties. It may be completely obvious to nurses in the emergency department that the lab is the primary source of bottlenecks in the system. The lab director, on the other hand, may be totally convinced it’s the inefficiencies in ED triage that are causing delays. The data will point a team in the right direction-perhaps supporting their original assumptions-or maybe highlighting an issue that was not previously recognized as a major CTQ.

Regardless of the red flags skeptics attempt to raise, Six Sigma is not a cult or a seventh-grade science project. It is a carefully structured, methodical approach to reducing process variation and eliminating defects. It’s hard to imagine any realm of endeavor that deserved such a solid approach to reducing costs and improving quality and efficiency more than the practice of patient care.

Carolyn Pexton has more than 17 years experience in communications and healthcare and is the director of communications for Performance Solutions at GE Healthcare. She is a Green Belt and has presented and published on topics including Six Sigma and change management within the healthcare industry. She can be reached by email at [email protected]