The path to Lean and Six Sigma is different for every company. Some begin a deployment as a means to increase productivity or profitability; others start with encouragement from a new leader. For DC Electronics, the journey stemmed from an unlikely combination of circumstances – unprecedented business growth and a bit of tough love from a trusted customer. 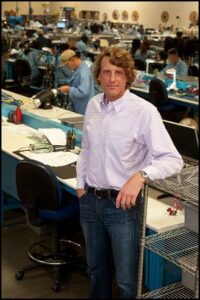 “We knew that we needed to adjust our manufacturing process, but we weren’t clear on what to do,” admitted Dave Cianciulli, president of DC Electronics.

The company, which assembles cables and harnesses, had eyed a Lean program in the past but was worried that the methodology did not fit its low-volume, high-mix type of work. “We thought it applied mainly to high-volume shops that kicked out a lot of repetitive part numbers, and we have thousands of different parts per month,” Cianciulli said. “Our thinking was wrong. We came to realize that a core segment of what we do really did benefit from Lean.”

The key to this conclusion, however, came in the form of frank feedback from a client on the supplier-customer relationship, which, in the client’s honest words, was not going that well. To address the issue, Cianciulli started asking questions regarding what DC Electronics needed to do to pull ahead of the proverbial pack. The conversation, he admitted, was a difficult one, but it’s exactly what the company needed to get moving in the right direction.

“I was fortunate to have the kind of relationship with this vice president of continuous improvement [at the customer company] where we could really share honestly what was going on,” Cianciulli said. “The supplier manager knew what needed to happen; he had been through it before. I just asked him point-blank, ‘Whom should I call, and where do we start?’”

Armed with quality advice and a desire for improvement, the company created a budget for the program, dedicated the resources and hired the talent to help execute the plan in the first quarter of 2010. “Once we decided to go, we moved very fast,” Cianciulli said.

Founded in 1979 in San Jose, Calif., USA, DC Electronics has been committed to continuous improvement for more than three decades – but the changes that Lean and Six Sigma brought forth in the company were vastly different than the results of past transformations. The company applied Lean and Kaizen practices to the production floor as well as to the way that information and materials are routed throughout the organization. Because the company has just 325 employees, most of whom have been with the company for at least seven years, getting buy-in from this tightly knit, team-oriented group was essential.

Handpicked Content:   Why Don't More Leaders Get It? Explanations for Six Sigma – Part 1

“Lean and Six Sigma is a flag that the entire company can rally around,” said Cianciulli. “It brings discipline to the process and makes the systems not dependent on people. In other words, the guy in the late shift doesn’t reinvent the wheel after the guy doing the same job in the afternoon. They work together to help define the optimal way to get the job done, and then they both do it the same way every time.”

What’s more, he said that if the company hires a new person, they are also trained to do things based on standard operating procedure. “[That is] unless this new person happens to come up with even a better way,” added Cianciulli, “in which case, we rework the process and everybody learns the new, better way of getting the job done.”

The efficiencies gained through standardizing processes helped DC Electronics become even more agile, prompt and error-free in its fulfillments. However, because the company is only 25 percent into its deployment, Cianciulli said that quantifying numbers are hard to come by. The company is in the process of developing metrics to determine an accurate calculation for return on investment (ROI). Knowledge gained through the deployment is revealing additional areas on which the company needs to focus. Within a year, Cianciulli hopes to have more tangible figures to illustrate the effectiveness of the process.

Change management plays a critical role in any Lean Six Sigma deployment, and the one at DC Electronics is no exception. Making the adjustments to processes and operations needed for Lean Six Sigma success can be difficult, and it was not an intuitive task for the organization.

“Before we embarked on the process, we were good at doing one thing over and over. We did not understand the idea of change,” said Cianciulli. “We are now a company that does change very well. We are becoming a very nimble, intelligent organization. The other big outcome [from starting Lean Six Sigma] was the creation of our own IT database management system that really drives everything. It’s one outcome we did not foresee but one we are very proud of.”

Cianciulli explained that the entire production process rests on the shoulders of the IT system. “It is the constant,” he added. “People come and go, but the brains of the system stay in that database and software.”

The organization invested in creating an IT system geared to meet the demands of its customers – typically original equipment manufacturers (OEMs), such as medical device and military contractors. The system is easy for employees to access and update, and provides a 360-degree view of the production process in real time, Cianciulli said. 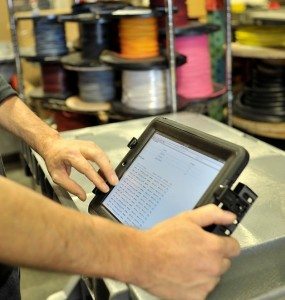 Employees use electronic tablets to access the real-time production database.

Even with the adoption of the new IT system, other challenges loomed for DC Electronics. One of the company’s biggest difficulties was, of all things, its success. “Companies usually embark on a process like this when things are going very badly,” explained Ruben Macias Jr., vice president of operations. Such was not the case for DC Electronics. The company was in its third consecutive record-breaking year in terms of business, said Macias.

“But what’s making you successful now is not necessarily going to make you successful in the future,” Macias said. “It was becoming increasingly clear to us that if DC Electronics wanted to stay ahead of the curve, and if we wanted to stay competitive with some of our key customers, we were going to need to think of ourselves as not just a cable house, but really a world-class manufacturer.”

Another complication was that the company was not equipped to handle the demands that came with implementing change. While employees were focused on learning and implementing a new process, in addition to reorganizing the factory floor, fewer resources were available to do the assembly work. To make sure that the company was meeting daily demands, additional staff was hired.

“We were staffed very well for doing the same thing day in and day out,” said Cianciulli. “We were not staffed for handling change. We had to bring on new people and really adopt a new way of thinking in order to make this happen.”

Even with the staff additions, Cianciulli said that he believed employees understood the company’s mission: To make the customer’s experience better and to improve processes and quality continuously. With this knowledge in place, Cianciulli posed the question: “Will these changes help us get closer to our vision?”

“The answer was clearly, ‘Yes.’ You can’t really argue with it,” he said. “The results are tested and proven. Was there some skepticism that the process changes would work for our low-volume, high-mix focus? Absolutely. But everybody could see the possibilities.”

Cianciulli understands the reluctance that many small businesses have to tackle Lean and Six Sigma, but he advises other companies to rethink what they think they know. “What we did not want to do was chase the latest, greatest fad in efficiency and team building,” he said. “The big attraction for us was the fact that Lean and Six Sigma principles have been around for a long time. They are tested. They fundamentally represent the best core manufacturing principles.”

Going All the Way

Cianciulli is the first to admit that the process has been a much longer one than he’d originally anticipated. Still, he has come to the conclusion that if the company is using the methodology in the right way, the practice may never end. Among the continuous questions he asks is, “How do we continue to implement it and drive home the benefits and measure ROI?”

“It is very easy to lose your stomach and quit,” Cianciulli admitted. “And if you do not see it through to the end, you can find yourself worse off than when you started. The Lean process addresses the whole system. You can’t just go part way.”

While allotting the time and staff to make a Lean Six Sigma deployment successful may be difficult for small businesses, it’s an endowment that will ultimately bring returns, said Cianciulli. “You need to invest the time and resources into following it through to the end,” he said. “Our mission is to make the customer experience continuously better. That’s really our guiding principle. We think Lean Six Sigma practices help us to achieve that.”

Katherine Bontrager is a freelance writer. She can be reached at katherine_bontra (at) hotmail (dot) com or at her website http://katherinebontrager.com/.

View Profile | View all posts by Katherine Bontrager
How to Use iSixSigma.com
Learn to Use Your iSixSigma Profile