How to Win Support for Continuous Improvement Programs and Projects

Gaining support to implement and sustain a continuous improvement program is an oft-voiced concern of Lean Six Sigma (LSS) practitioners. These concerns reflect frustration in both senses of the term –  feeling frustrated personally and encountering attitudes that frustrate the effectiveness of the program.

Three sets of skills and methods have shown success in gaining buy-in. They are:

John Kotter, professor at Harvard Business School and author of the book Leading Change, made two assertions about leaders: 1) that every leader who used Kotter’s defined eights steps of leading change saw successful results from the change they were leading and 2) that every leader who approached Dr. Kotter after a change had failed to gain traction was able to identify the step in leading change that had been skipped.

Dr. Kotter’s eight steps are described below along with examples of direct application of these steps toward gaining buy-in of continuous improvement projects and programs.

People tend to feel comfortable with their current situation and naturally resist change – unless there is a good reason for change. The outcome of Step 1 is, in effect, a compelling business case for change. Why is this change necessary? Articulating that compelling reason – the issues with the current reality that drive an individual, a group or a company to drive others – is a critical first step.

For an individual project, the project charter – approved and supported by key stakeholders – can provide this compelling reason, this urgency. For a broader initiative, such as implementing an entire LSS program, substantial effort might be required to identify major issues holding the organization back, and thus provide compelling motivation for change. 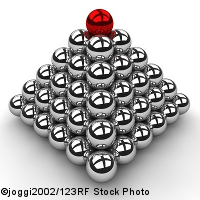 Implementing change by yourself is not only lonely and frustrating – it is also ineffective, according to Dr. Kotter. It may be appropriate to combine Steps 1 and 2 to form a guiding coalition that shares your sense of urgency and then brainstorm ways to clearly articulate the “burning platform.”

For an individual project, the team is the obvious coalition – with the addition of a management sponsor or Champion committed to the success of the project. For a LSS program, key stakeholders such as management sponsors or Champions would make a good guiding coalition – especially if the LSS program can be shown to align with achieving their own goals, the organization’s “must-do’s” going forward. In that sense, the LSS program provides the how for achieving the goals.

Defining the vision for improving a process or developing a new product can be a team-building activity that leads to a vital deliverable: for a smaller-scope project, a compelling business case for the project; for a larger-scope program, the compelling vision that the stakeholders (the guiding coalition) would share with the larger organization for how the LSS program aligns with achieving the goals of the organization.

Team building with the guiding coalition is part of the desired outcome, and the development of the vision should involve the stakeholders so that they feel ownership of that defined vision. The vision could include such concepts as doing things right the first time, dramatically reducing new product development time or ensuring that the voice of the customer (VOC) is heard and heeded.

If the vision has been polished so that it is brief, clear, compelling and easily remembered, then it has fulfilled the first part of the equation:

This equation explains that the effectiveness of a proposed change within an organization depends not only on the quality of the change and the preparation for the change, but also on the receptiveness of the organization to accepting and even embracing the change.

Some key elements required for communicating a vision well include the following1:

Step 5: Empower Others to Act on the Vision

The term frustration is unusual in that it defines both the symptom and the cause. If people begin to feel frustrated and discouraged, it probably means that something seemingly or actually beyond their control is preventing them – frustrating them – from accomplishing the goals.

The Champion’s role is to help individual project leaders and Black Belts remove roadblocks in their projects. While Black Belts might feel that they and their team are expected to handle everything themselves, the real expectation is to recognize roadblocks and impediments, and handle what they can reasonably and confidently. Then they can meet with the Champion to request help with removing roadblocks beyond their control. Ideally, this happens quickly so that projects are not delayed and frustration and discouragement are not allowed to fester within the team.

For roadblocks and impediments to a large-scale project, the members of the guiding coalition should keep their fingers on the pulse of the organization. When they sense frustration, they should use their insight and power to remove roadblocks.

Short-term wins help a team in a multitude of ways. They:

DMAIC (Define, Measure, Analyze, Improve, Control) Six Sigma projects lend themselves to low-hanging fruit. They find opportunities for quick wins in the Define and Measure phases through process mapping and the identification of non-value-added activities. Beyond that, team-building activities such as brainstorming and fishbone diagramming in and of themselves can achieve visible, if small-scale, success.

By contrast, the early phases of Design for Six Sigma (DFSS) do not lend themselves so readily to low-hanging fruit. While activities related to gathering VOC can provide insights and build rapport between marketing and engineering, the “proof” of the methodology being successful may have to wait through a full new-product development cycle, which hardly qualifies such successes as quick. There are, however, a few approaches that can be used to generate short-term DFSS wins:

Steps 7 and 8: Consolidate Gains and Anchor the New Approach in the Culture

People rise to challenges if they trust that:

People also feel recognized when they are encouraged to share their successes, through presentations to management and elsewhere within their organizations as well as through presentations to other organizations. Town halls and management reviews are excellent forums for recognition. Media such as staff meetings, newsletters, bulletin boards, posters and banners can be used to recognize people and teams and celebrate success. External media may include publishing articles detailing a success. If the work is truly outstanding, significant recognition can be provided by selecting and recognizing their project as exemplary, having it videotaped as an outstanding success story or having team members represent the company at a conference.

Monetary rewards may also be appropriate and will reinforce the recognition – but public recognition by management and peers that they and their project were successful can be even more valuable.

Recognize and Overcome Resistance to Change

People generally do not like other people imposing something on them, because an imposed new approach implies that their previous efforts were insufficient, ineffective and inferior. While dealing with resistance to change is frustrating and challenging, in a sense resistance to change is a good attribute – it reflects critical thinking, a key attribute for leadership.

As a recently hired device engineering manager who was considered an “outsider,” I dealt with a severe issue that had been communicated all the way up to the CEO of Motorola for which no one wanted to be held responsible, no one wanted the blame if anything went wrong with the solution, and everyone wanted to be on record as having raised questions about the solution in case anything went wrong. I was able to deal with Layer 2, disagreement about the direction of the solution, by showing with a simple cube plot from a design of experiments that the proposed solution was so far from the conditions that had caused the original issue that it was almost impossible for the problem to recur. I dealt with Layer 6 by clearly articulating the remaining steps for implementation. (To be honest, the stakeholders also were clearly relieved that it was just my head that was on the line.)

The problem was solved, and never recurred – not for the next 10 years, not even until the manufacturing area was finally decommissioned.

And no heads rolled – not even mine.

The keys for dealing with resistance to change are to first identify the key stakeholders – generally, this consists of managers and people who will be implementing the change and people who will be affected by the change. Then identify the sources of their resistance and meet with them (usually one-on-one) to discuss their concerns – listen, empathize and work with the resistant individuals to either find a resolution or to influence them to engage in a “willing suspension of disbelief” until results are achieved and the concerns are laid to rest.

These layers of resistance can be used to more deeply understand the sources of resistance. For example, if the resistance involves Layer 1, disagreement about the problem, then one or more team members can meet with the stakeholder(s) to better understand why they disagree, if there is another problem that needs to be addressed first, if there is ambiguity about the business case, or if the sense of urgency from Step 1 has some ambiguity that needs to be resolved.

Dr. Robert Cialdini, professor of psychology and marketing, identified six principles of influence.3 They are:

The table below shows the alignment and usefulness of understanding these influence principles during the phases of a project or program.

Six Sigma practitioners can win support for their programs using these proven step-by-step processes for leading change, recognizing and overcoming resistance to change, and applying influence principles to engage resistant stakeholders. These approaches have been used with remarkable success in a number of businesses. Addressing the people side of implementation provides short-term benefits in buy-in and support, but also builds relationships that can assure long-term success.