More than 400 attendees gathered at the National Conference Center at Lansdowne, Va., in June for the fourth Department of Defense (DoD) Performance Symposium. The symposium, hosted by the Department of Defense (DoD), Office of the Secretary of Defense, Lean Six Sigma (LSS) Program Office, provided a forum for all services and other government agencies to share their innovation and successes in performance improvement.

Enterprise Excellence was chosen as the theme to reflect the ongoing efforts to improve performance supporting the warfighter, as well as the opportunity to accelerate change with the staunch support and focus of senior leaders. The symposium demonstrated alignment of DoD performance improvement activities to the national priorities and highlighted progress in those performance areas.

The Voice of Leadership

The program offered a variety of speakers, who provided insight and valuable advice on improving performance within an organization to an audience of both DoD and non-DoD attendees.

“This year’s symposium was an exciting opportunity for performance improvement practitioners to hear from top leadership,” said Mr. JD Sicilia, Director, Strategic Management and Performance. “The senior leaders from across the Defense Enterprise reinforced the importance of managing resources in a changing environment. The DoD’s top 10 high priority performance goals are being worked and progress is being made to improve performance across DoD. We just keep getting bigger and better opportunities to excel and the symposium provided valuable takeaways for all attendees.”

Handpicked Content:   Employees Writing on the Walls? Not a Problem

Ms. Elizabeth McGrath, DoD Assistant Deputy Chief Management Officer, spoke about the DoD high-priority performance goals, as well as the INVEST Awards program. The program encourages all DoD military and civilian employees to submit their ideas to save money, avoid cost, reduce cycle time and increase the agility of the Department. Those who submit the best ideas for improving efficiency will be rewarded with cash prizes. Visit http://www.defense.gov/home/features/2010/0710_invest to learn more.

Mr. Eric Fanning, Department of Navy, DUSN, BOaT/Deputy Chief Management Officer, said in his briefing that he was inspired by the recent budget-related guidance offered by Secretary of Defense Robert Gates. Gates has said the DoD must make significant improvements in the effectiveness and efficiency of business operations in order to sustain necessary investment levels for mission essential activities. Fanning recognized this call for efficiency as the opportunity, the game changer for continuous process improvement and Lean Six Sigma.

Gen. C. Robert Kehler, Command, Air Force Space Command spoke about Post-inspection Problem Solving. During his presentation, he addressed the question: “How do we apply these tools and techniques in the practical sense to address problems that we have and see results at the other end?”

The third day offered the Army, Navy, Lean Six Sigma Program Office and Office of the Secretary of Defense/Agencies an opportunity to present specialized program updates and panel discussions. All were well attended and participants had high praise for the speakers.

New this year was the Performance Bowl. Seven teams of DoD and Federal Agency Black Belts competed to test and improve their Lean Six Sigma skills in a daylong DMAIC simulation, taking place before the symposium started.

Each team was given a scenario of a fictitious company with low customer satisfaction and declining sales. The goal was to gain the highest return on investment from improvement efforts. The simulation was developed by Moresteam.com; teams used Minitab statistical analysis software and the financials were provided by CS International.

The Performance Bowl included tollgate reviews for each phase and curveballs during the simulation, as well as three lifelines. At the end of the day, the teams presented their solutions to judges for a final score. The U.S. Air Force Team GB – made up of Capt. Ronnie J. Synakowski, a computer engineer from the Air Force Technical Applications Center, at Patrick Air Force Base, Fla., and Pamela L. Wright, the chief of plans and programs for the 498th Nuclear Systems Wing at Kirtland Air Force Base, N.M. – took home bragging rights as the winning team. 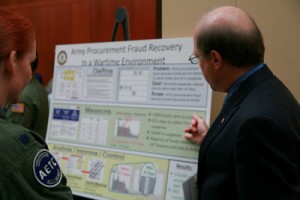 As part of the symposium, services and agencies were invited to submit storyboards, highlighting projects they had worked on. Many attendees are responsible for directly impacting their respective services by streamlining or facilitating revolutionary processes that save millions of dollars, make better use of existing resources, or enhance quality of life for servicemen and women. There were more than 40 storyboards submitted, which documented success in projects in all areas of process improvement. On breaks and during networking events, such as the Six Sigma Winery wine tasting, attendees had the opportunity to walk people through their project.

Over the course of the symposium, many enterprise-wide improvements and significant messages were shared. But none were more moving than that from Sergeant Major of the Army Jack Tilley of the American Freedom Foundation – an organization that honors veterans of America’s armed forces and raises money and awareness for various veterans’ organizations. As a token of appreciation for presenting at the symposium, donations were made to the organization in the name of each keynote speaker.

SMA Tilley shared a video of the American Freedom Foundation’s efforts and some of the veterans assisted by them. The message made a timely connection to the ultimate goal of the DoD’s enterprise excellence efforts.

“Our mission is to accelerate change and improve performance so that the warfighter continues to have the best we can give,” said Mr. Sicilia. “We must continue to tap the power of an enterprise-wide approach to strategic change. No matter how successful our efforts have proven, these initiatives can only go so far working alone. To achieve sustained, enterprise-wide, breakthrough change, we all need to work together and the 2010 Symposium is our opportunity to highlight the exceptional continuous performance improvement efforts of DoD.”