Red River Army Depot (RRAD) is a sprawling industrial complex of some 1,400 buildings on 18,300 acres in northeast Texas. Called one of the “crown jewels of the Army” by Army Chief of Staff Gen. George W. Casey Jr., Red River is a leader in supporting the warfighter.

The depot’s mission is to return torn-up, battle-damaged tactical vehicles that come in from Kuwait, Iraq and Afghanistan to full mission-capable condition. These vehicles include the Humvee, the HEMTT (heavy expanded mobility tactical truck) and the Bradley tank.

The need is to turn them around as quickly as possible. With the continuous improvement tools of Lean Six Sigma, Humvee output has increased from half a vehicle a day (a single 10-hour shift) to 32 a day, said Mike Lockard, chief of the Office of Enterprise Excellence at Red River. He expects the depot will produce 5,000 Humvees during fiscal 2007. Lead time on the HEMTT has dropped from 130 days to 30 days.

RRAD personnel include two active Army officers – a colonel (the commander) and a sergeant major – plus some National Guard and Army Reserve officers. Most of the employees are civilian government workers and contractors. 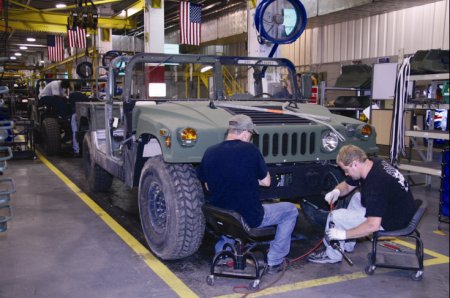 “We take a Humvee down to the frame and build it all the way back up,”
said Mike Lockard, chief of the Office of Enterprise Excellence at Red River.

Life-size silhouettes of a soldier positioned on the shop floors constantly remind production line workers who their customer is. Putting a face to the silhouettes, on a Wall of Honor are pictures of workers’ family members who are serving in the military. The motto of the depot is, “We build it as if our lives depend on it…Theirs do!”

The philosophy is simple: The shorter the repair time for a vehicle, the less the cost and the more money that is available to support the soldier. The less time a vehicle is in process at Red River, the more the vehicle is available when the soldier needs it. The better the product, the longer the product’s lifespan and the better the chance the soldier will come home safely. The emphasis is: How can we make this product better every day?

Fifty percent of the RRAD workforce (about 1,800 people) have had training in the basics of Lean Six Sigma and have participated in rapid improvement events and just-do-its. Last year Red River trained about 80 people in either four-week Black Belt training or two-week Green Belt training. The depot expects to train 150 this year.

In 2006 to get buy-in on the shop floor, more than 300 first-line supervisors were given Yellow Belt training in the fundamentals of Lean Six Sigma. “It was a huge step forward in culture change,” Lewis said. “Now it’s their program.”

For its accomplishments, Red River was honored in 2006 with the Department of Defense’s highest award for depot maintenance and a silver Shingo Prize.