The CSC is considered the “face” of the PM TIS organization. The responsiveness of its representatives often defines the “moment of truth” in a customer-product relationship where a customer decides their opinion of the offering. A smooth and easy interaction can usually make up for the original problem that led to the call. Conversely, a bad interaction can irrevocably damage the customer’s confidence in the product and the organization.

Because of the important role call centers play in customer service, PM TIS was concerned by negative reports from the Army transportation community about the CSC’s responsiveness. PM TIS set out to improve the global perception of its support to the US Army transportation logistics environment, and in doing so completed a Lean Six Sigma project that brought the CSC’s performance in line with customer expectations. 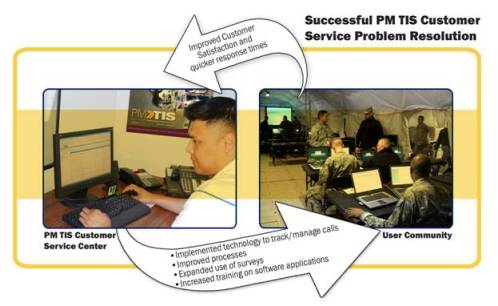 The Lean Six Sigma project was initiated after survey results and emails from various PM TIS stakeholders and end-users generally indicated that customer support was taking too long. The most serious comments suggested that it took days or even weeks to resolve an issue with the CSC. The team’s original goal centered on reducing the average call cycle time while providing a quality response to the user. The team set out to map the process and collect baseline process performance data.

After conducting a Kaizen value stream mapping event and analyzing numerous survey comments and CSC data, the team isolated the problem calls that drove dissatisfaction to a small percentage of calls that stayed open much longer than the CSC’s mean resolution time. Those calls prompted emails and phone calls from senior leaders in the Army, who expressed that the CSC was “not responsive to our needs.”

The team based this analysis on five months of baseline data (722 calls) with a median resolution time of 10 minutes. The baseline analysis also was supported by the fact that 80 percent of calls were resolved in less than two hours. The team realized that increasing customer satisfaction was not going to be done by minimally decreasing average cycle time for all calls, but by drastically reducing the cycle time for the small percentage of tickets that were slipping through the cracks.

The revelation, which came in the Analyze phase, caused the project team to go back to the Define phase and re-focus the problem and goals. The team changed its goals to ensure that the metrics were strongly correlated to reducing the variation associated with outliers as opposed to reducing the overall mean. The PM TIS leadership, who had regularly attended In Progress Review meetings, supported the team’s recommendation to revise its goals to focus more on the root cause of customer dissatisfaction: outliers. Specifically, the team and Project Sponsor created the following simple metrics:

The team used dot plots (Figure 2), cumulative function plots, and box plots to graphically show the problem: controlling the outliers that stayed open for long periods of time. As the chart shows, those outliers represented a small, but potentially damaging performance indicator.

The team employed a variety of strategies targeted to limit outliers and improve performance (see table below):

In a broad sense, the team’s success was heavily tied to collecting the right data and having inclusive and constructive discussions about the data. This involved the team being flexible in its goal setting approaches, which ultimately led to picking solutions that had the biggest impact on the problem: customer dissatisfaction associated with outliers. It also involved regular updates to senior leadership with accurate data that showed the best and worst of performance. To maintain momentum and buy-in with this approach it was vital that senior leadership foster an environment that was non-attributive but required participation. In this environment, discussions and solutions centered on the process as opposed to the people. This allowed the organization to have an open discussion of the aligned metrics, and to plant the seeds for continuous process improvement in other areas.

Since the completion of the project, senior leaders have expanded and evolved the metrics requirements to include expanded surveys, focus groups, and the balanced scorecard. This will give the organization a more accurate view of their overall organization’s performance in supporting the Army transportation logistics environment. The team’s project was a step in the right direction to linking data driven performance measures to customer expectations.