A Sense of Urgency in the Inspection Dock

The 21st century has brought on many changes for the Department of Defense, affecting all the military branches. In particular, the Air Force has encountered a reduction of forces, base closures and funding cuts to many of its programs. Additionally, the message from the Department of Defense and Air Force senior leadership is simple: resources will no longer be as available as they have been in the past. These course adjustments have been felt by all, including members at Beale Air Force Base.

In the last year, employees in the base’s inspection hangar set about using Lean Six Sigma tools and approaches to improve efficiency and lower costs. By completing process improvement activities, the employees were able to gain more from their resources.

Beale Air Force Base is located approximately 48 miles north of Sacramento in Northern California. The base opened its gates in 1942. During World War II, the base’s 86,000 acres were home for more than 60,000 soldiers, a prisoner-of-war encampment, and a 1,000-bed hospital; in the late ’60s through the early ‘90s, it was the home of the legendary supersonic SR-71 Blackbird. For the past 35 years, it has been the home base for the renowned U-2 Dragon Lady spy plane.

The inspection hanger, known as Dock 2, had poor lighting that barely reflected off the stained black and gray floor. It was hot in the summer and cold in the winter. It certainly wasn’t the ideal environment to facilitate the crucial inspection process of a U-2 spy plane. The aircraft technicians working in Dock 2 are responsible for accomplishing a comprehensive inspection and systems operational checks for the entire U-2 airframe and all its associated sub-systems. The year 2009 had been tough for the employees who worked in Dock 2 – the major inspections were taking an average of 16.2 days to complete, with the worst performance topping off at 22 days. These inspection lengths all exceeded the minimum standard of 13 days set by the organization. The excessive amount of days to accomplish the inspections had a negative impact on the Combatant Commanders, who were not receiving effective aircraft in a timely matter. The unintended consequences were the inability to maintain the U-2 pilot flight qualification currency.

The current environment within Dock 2 required change. The mid-level management knew that in order to obtain full commitment from all within the work area, they would need the support of the organization’s senior management. Two attempts to conduct a value stream analysis (VSA) were put aside by senior management because of higher priorities. The outlook was bleak and senior management continued to ignore the insistent requests from the mid-level management, providing only band-aid solutions such as augmenting the current staff with outsourced help from a contractor or extending the work hours of the technicians until the production output reached acceptable levels. Both band-aid solutions were only temporary fixes, costing an exorbitant amount of money and lowering the work center’s morale.

Unexpectedly, after months of status quo – and with the work environment within Dock 2 only getting worse – the senior leadership perspective on conducting the VSA changed. The message from the Department of Defense and the Air Force senior leadership, coupled with the pressure from the Dock 2 management, altered the decision-making process of leadership at Beale Air Force Base. The not-so- obvious message from all was simple: it was no longer about just being effective, it was also equally as important to be efficient. These changes forced leadership to approach decision-making differently and created a sense of urgency that would change the mindset of all.

A U-2 Size Effort

Now with the support of the senior management, it was time for a transformation – a new way of doing business. A motivated leader set about forming a team under the guidance of a Black Belt. Together they identified the appropriate team members from the applicable work areas and scheduled a date to conduct a VSA. 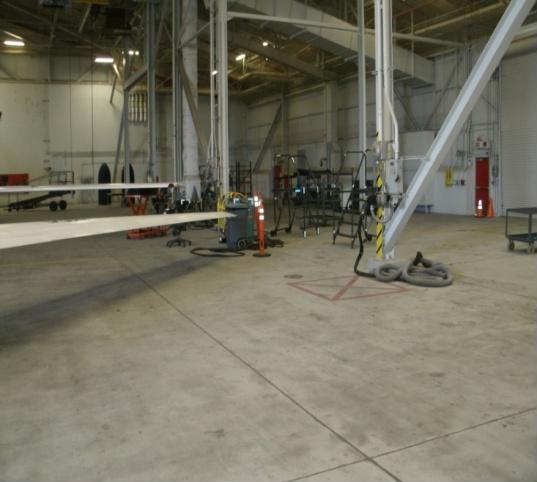 Figure 1: Dock 2 Prior to VSA Effort

During the event, the team mapped out the current state. This map revealed to the team that only 39 percent of their tasks completed during the inspection process were value-added. Those statistics were quite staggering to the team, specifically the employees of Dock 2. Guided by the team lead, the group identified the critical path of the process, which allowed them to highlight the undesirable effects that needed to be refined to allow for better flow during the aircraft inspection process.

Facilitated by the Black Belt, the team then went through root-cause analysis to identify the sources behind each of the identified undesirable effects. Four key areas were identified:

The team then developed 32 separate countermeasures to address the root causes that they were dealing with. There were 22 tasks that could be accomplished immediately and would have a powerful impact at reducing the inspection flow time. Some of the tasks included were as simple as:

All of these countermeasures were focused to have an instant increase in aircraft touch time, eliminate wait time and improve the overall flow of the process.

The team also identified 10 projects that would provide significant long-term gains in the overall production process of completing phase inspections within the desired goal. These projects required time for data collection, validation and senior leadership approval. One initiative was to develop an in-house training program and staff it with a full-time training manager. This would create a training schedule and build consistency among the floor technicians. A second initiative was re-aligning and aligning critical inspection tasks to different shifts to increase flow by allowing specialty skilled maintainers time to perform sensitive work on the aircraft without interruption. Lastly, designing the ability to refuel and defuel the aircraft indoors, which would save an estimated 40 labor hours per each inspection – significantly reducing inspection flow time.

At the end of the event, the team presented senior leadership with the action plan and the new standard. All items on the action plan were approved and the green light was given to the team members to initiate and work toward accomplishing the projects.

The team leader, facility manager, work center manager and Black Belt understood that event momentum had to be maintained through initiation of the countermeasures. Therefore, they standardized a day and time to meet each week to review the progress on all of the action items. In turn, the process owner and Champion received monthly updates by the team lead. Furthermore, the team leader monitored the inspection process flow every time the group implemented a countermeasure to ensure nothing would regress.

Within the first month, the team systematically put into operation all 22 tasks on the action plan as well as started the majority of the projects. In the second month, the phase inspections began improving and six of the 10 projects had been completed. Finally, within three months, the inspection work center completed an aircraft phase inspection on time, utilizing the new standard outlined by the employees. Senior management was blown away! Throughout the year, the employees from Dock 2 repeatedly completed U-2 phase inspections on time or ahead of schedule without having to work six days a week or work overtime. An aircraft never came out late from Dock 2, and the work area set a new average record of 12.4 days per inspection – exceeding the minimum standard of 13 days. 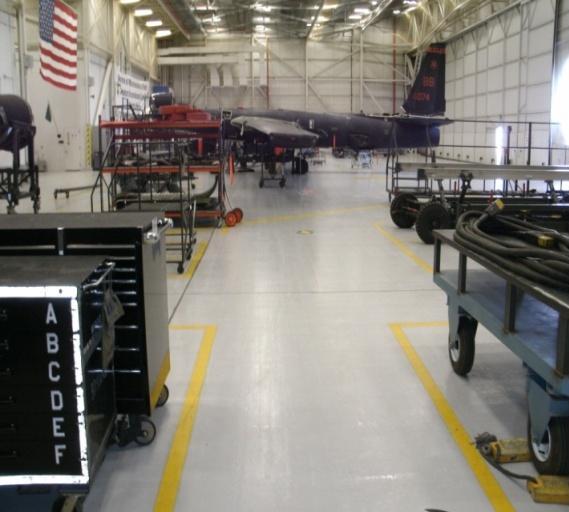 Figure 2: Dock 2 After the VSA Effort

In addition to reaching and exceeding the goal of 13 days, Dock 2 and Beale Air Force Base benefited from further savings. The hanger had a facelift: new lighting was installed, floors were painted and fans were installed to keep the maintainers cool during the hot summer California days and evenings. The employees from Dock 2 had now built extra capacity into the inspection process and were able to assist their sister organizations. As for the unintended consequences, for the first time in more than two years, Beale Air Force Base met their annual flying hour contract with zero deviations – a direct result of having ready aircraft from Dock 2. The innovative ideas from the employees during the event eliminated more than 40 aircraft tows and recouped 580 man-hours per year by enabling the refuel and defuel of the aircraft indoors, not to mention minimizing the possibility of towing accidents.

The inspection work center’s overall quality assurance inspection pass rate prior to the VSA was 90 percent; after the VSA, it jumped to 97 percent, beating the Air Combat Command standard by 12 percent. The U-2 aircraft fleet health, also referred to as the mission capable rate, is at an all time high of 84.1 percent. In addition, the achieved efficiencies and extra capacity gained in the production process allowed the inspection team to volunteer more than 1,400 hours to military and non-military organizations to aid their local community.

All of these achievements and additional savings have helped the organization win prestigious Air Force level awards: the Clements McMullen Memorial Dandelion Weapons System Maintenance Trophy and the 2010 Air Combat Command Maintenance Effectiveness Award. In addition, senior leadership has witnessed an improved morale from the mid-level management to all the employees in Dock 2.

The Air Force is going through many changes and effectiveness coupled with efficiency must now be considered a necessity. The aforementioned successes and savings allowed many throughout the organization to realize the value and power of utilizing process improvement. To date, Dock 2 continues to be more efficient and effective following their change event and perseveres on its journey striving for perfection.