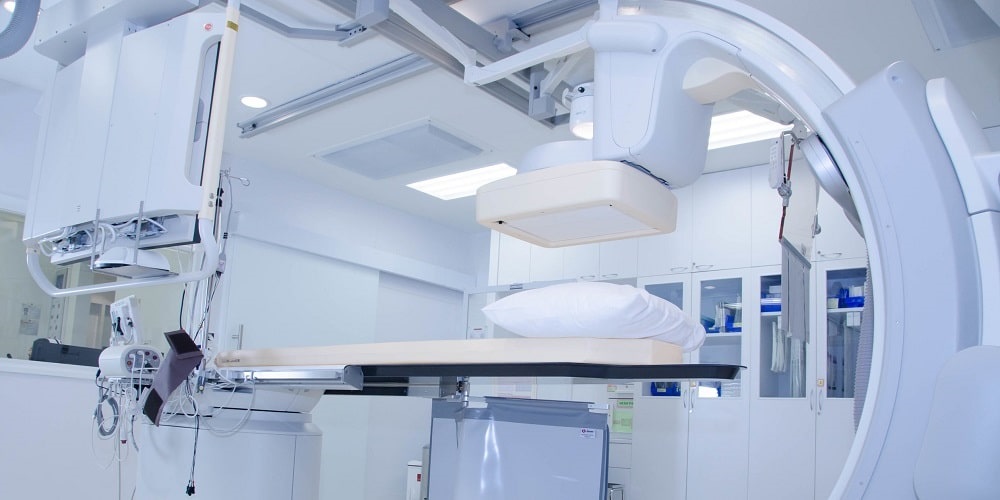 Cardiac catherization labs represent a significant capital investment for many hospitals. Realizing a return on this investment is increasingly challenging, given the introduction of advanced technologies and limitations in reimbursement. To meet the challenges and maintain fiscal health, hospitals pursue Six Sigma, Lean and change management techniques to improve throughput, maximize equipment utilization and increase efficiency.

Improving first case start time was selected as a project by the Children’s Hospital of New York for several reasons. It contributed to a significant amount of lost productivity and failure of the first case to start on time was delaying subsequently scheduled cases. This variability in start time and lack of schedule predictability also was contributing to staff, physician and patient dissatisfaction.

A charter was developed and approved by senior leadership and a team assembled to lead the initiative. The charter provided:

The project charter provided the team with focus and direction. The team then developed a map describing the current process. 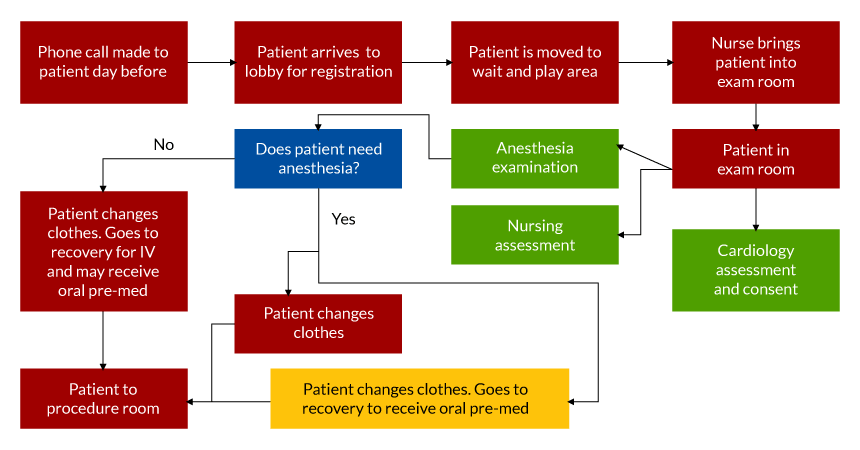 The team used brainstorming and a fishbone diagram to identify all the potential contributors to delaying the start of the first case. Some of the factors identified included: 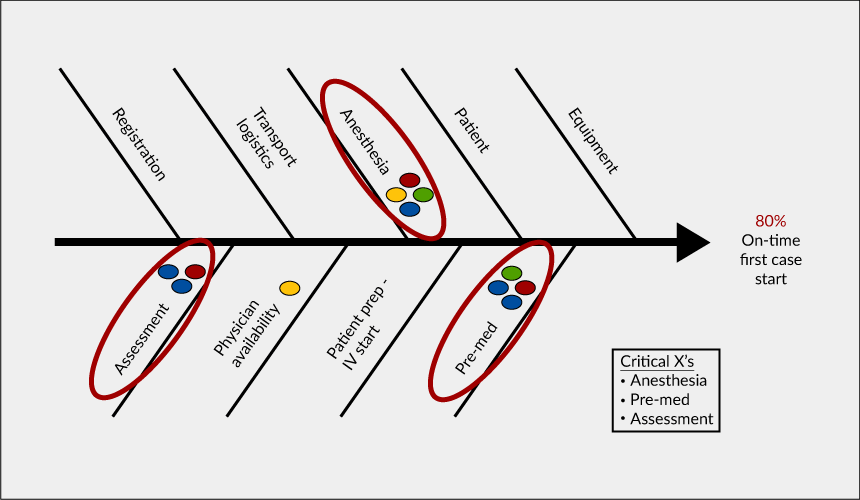 Data was then collected to identify those factors having the most significant impact on delaying the start of the first case.

Regression analysis, a statistical tool used to model and predict the relationship between variables, revealed that the time in which the cardiology assessment was completed was a key driver in whether the first case would be completed on time. The R-sq adjusted value showed that it accounted for about 60 percent of the variation in the process. Here is a table showing the first case start data’s statistical analysis. 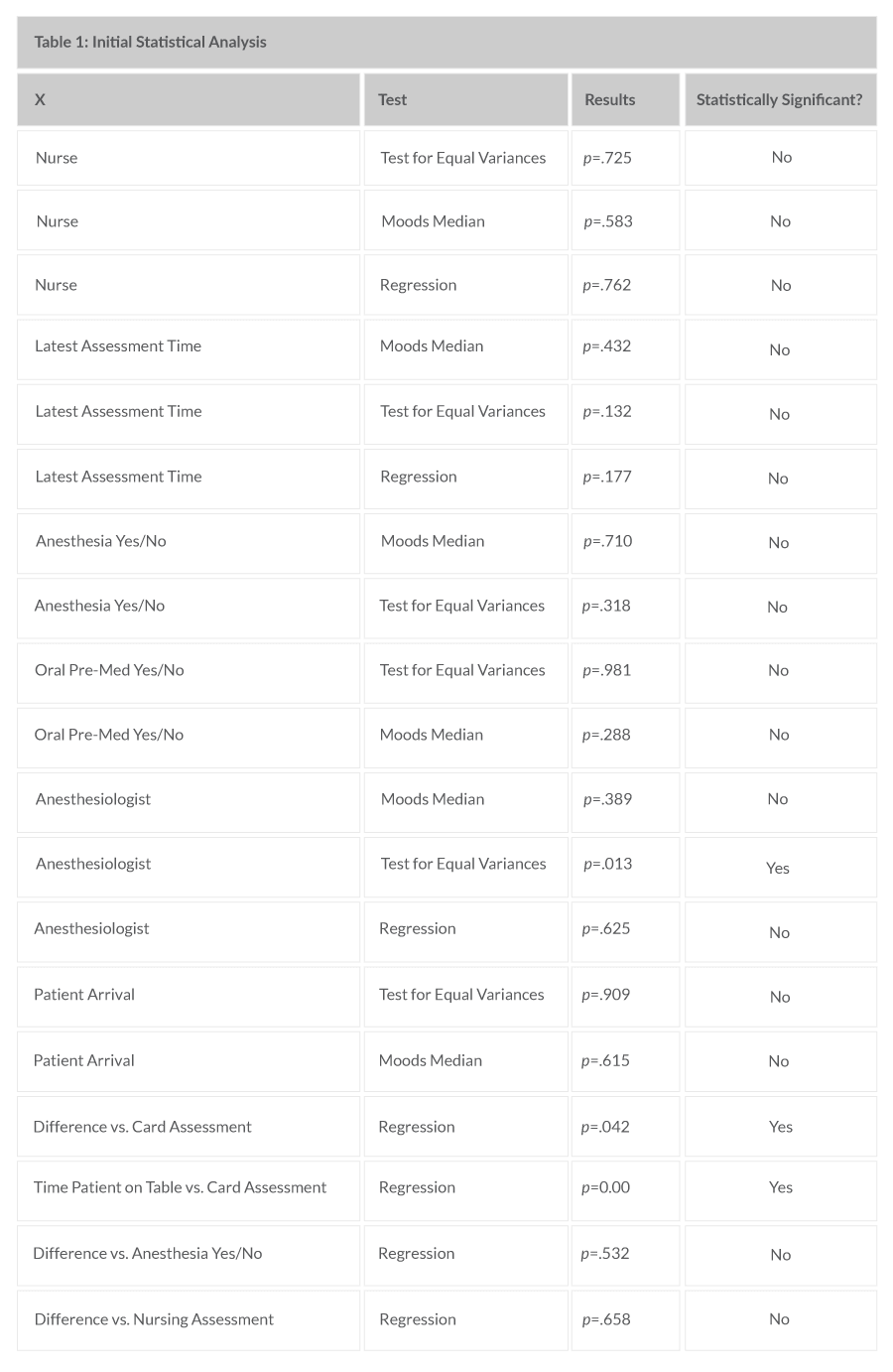 As shown in the table below, re-measurement of the process indicated a dramatic improvement in the number of first cases starting on time and a reduction in variation.

Process control mechanisms were implemented to ensure the changes could be sustained, and that the gains achieved from improvement activities would not be lost over time. The control plan outlined the procedure for monitoring the critical X (completion of cardiology assessment) as well as the number of on-time first case starts. Regular reporting to the project’s executive sponsor reinforced the importance of the initiative and insured that changes would become imbedded into the organization’s culture.

Increased pressure on cardiac catherization labs to reduce operating expenses and maximize capacity utilization necessitates the use of innovative methods to optimize departmental performance. As demonstrated in this case example, the statistical rigor of Six Sigma is an effective method for achieving rapid organizational change with measurable positive results.