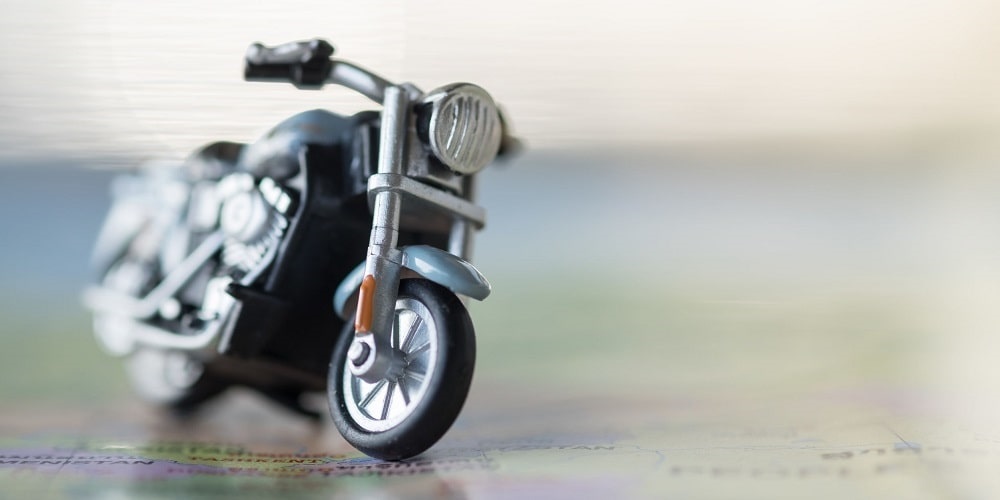 When teaching Design for Six Sigma (DFSS), one of the challenges a company faced was finding a new method for teaching design of experiments (DOE). Some of the trainees had already been through Green Belt and Black Belt DMAIC (Define, Measure, Analyze, Improve, Control) training. As a result, they were familiar with the statapult exercise typically used to teach DOE, and were either bored with the contraption or they already knew what levels to set to reach a given distance.

Cost was also an issue. The company’s program at the time was in pilot mode and the entire budget went to travel expenses. Traditional Six Sigma DOE training aids cost more than $220 each.

The challenge was finding a fun and interactive way of teaching DOE that had the following attributes:

The Experiment and Its Objective

The Mattel Corporation under its Hot Wheels brand made a toy called a Formula Fueler. The particular one used in class was a motorcycle. It was chosen it because it came with two fuel tanks and because of its relatively small size.

The motorcycle uses common beverages as its fuel; with the press of the power button, the vehicle races across the floor. The toy manufacturer encourages its owners to experiment with different liquids to see how it affects the motorcycle’s response.

The purpose of the experiment was to determine how three different liquids affected the distance a toy motorcycle traveled. The motorcycle used the liquids as fuel. The toy motorcycle actually ran on three AA batteries, and the liquid acted as a conductor that closed the circuit to the electric motor, which turned the wheels. The distance the motorcycle traveled was related what was in the liquid or mixture-of-liquids. This relationship was determined through a full factorial DOE. (The key ingredient was the amount of salt in the solution. Because salt contains sodium, which has the properties of metal, higher sodium levels lead to better performance.)

Setting Up the Experiment

The items used in the experiment were:

It is important to use non-toxic liquids. In other words, only use beverages or mixtures that a person can drink. Not only is this a safe practice, but the fuel tank is the most critical and most vulnerable component of the experiment. Harsh detergents or chemical compounds could weaken the plastic material or cause it to become brittle. If the fuel tank breaks, the whole DOE exercise will be in jeopardy.

Limited by the size of room in which the experiments were to be performed, the response variable could not go beyond 25 feet. This also was the limit on the length of the measuring tape. In order accomplish this. Solutions had to be diluted. If one used coffee and juice in their normal concentration, the toy motorcycle will travel more than 25 feet.

The concentrations used in the experiment were:

It was important to make sure the coffee was not hot because the thermal expansion could break the plastic fuel tank. Adding ice cubes not only diluted it, but cooled it down fast.

Handpicked Content:   DOE in Software Testing: The Potential and the Risks

The response variable was the distance from starting point of the motorcycle to the center of the front tire.

To keep from interfering with the results, the measuring tape was removed from the floor before each run.

The fuel tank was the most important component of the experiment. It holds the mixture which determines how far or what distance the toy motorcycle will go. The maximum capacity of the fuel tank was 6 milliliters (ml). Therefore, the correct proportions in reference to the experiment were as shown in Table 1.

This experiment can accommodate teams of two to four people. The tasks for each person are allocated in the Table 2 below:

The consistency of the results was surprising as indicated in the statistical analysis results (Figure 1). If only in the real world one could achieve correlation coefficients as high as those the students experienced.

The other surprise was that in a 2**3 full factorial DOE all the main effects and interactions were significant. In fact, the three-way interaction seemed to be the most influential factor in the experiment (Figure 2). 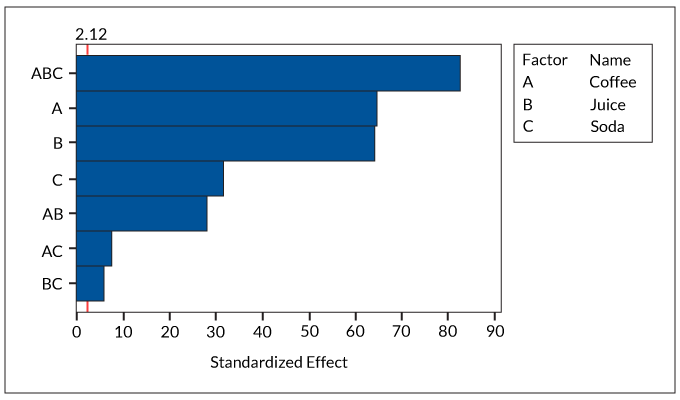 The cube plot determined the right settings to reach a given distance (Figure 3). 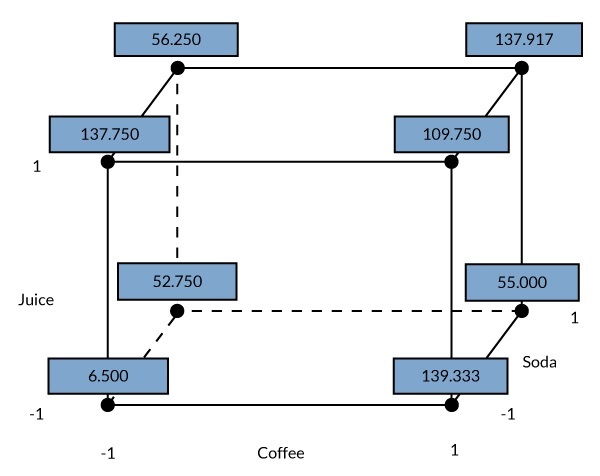 For example, if the goal was determine to the factors and set the levels so that the motorcycle would travel 110 inches, one would use the following mixture of beverages:

The time it took to set-up the experiment was eight minutes. It took 36 minutes to collect 24 observations, and about 10 minutes to analyze the final results. Thus, the recommendation would be to allocate approximately 60 to 90 minutes for this experiment in a Six Sigma classroom setting.

There were three disadvantages or challenges with this experiment:

Overall, the teaching aid met all the needs for a DOE experiment. For instructors who travel a lot, this experiment is ideal. All they have to pack is a tape measure, the motorcycle with the fuel tank attached, and maybe a syringe – a typical textbook takes up more space than these teaching aids. The other materials (e.g., beverages) are usually provided as incidentals of any training session. Since the motorcycle comes to a dead stop, there is no problem measuring the distance. Experience indicates the response was very consistent. And finally, the cost of teaching aids was well below $25 per set.