Things that make you feel good in right away aren’t always beneficial in the long run. Some things, like candy, are actually harmful in the long term. While others, like getting the high score on Space Invaders, just don’t end up mattering very much. You feel good as they are happening, but beyond that they don’t improve your life too much. A lot of things that make us feel good fall into this category. Maybe even most things.

Now this is hardly news. It’s not a novel insight into the human condition. But it isremarkably tough to remember in the moment. Human nature makes it very difficult to pass up short term gratification in favor of long term rewards. Especially when those long term rewards might require not only missing out on short term pleasure, but perhaps even opening ourselves up to short term pain. It’s one thing to understand the equation on an intellectual level, but quite another to have the discipline to put it into practice. After all, who doesn’t like candy?

So what does this have to with Six Sigma? Well, even in the best intentioned organizations, people like candy. For deployment leaders, that means there is strong temptation to dispense instant gratification to the organization. Training programs that are short, snappy, and enjoyable. Projects that deliver immediate return on investment. Minimal disruption. Quick results. Excitement. Fun. Candy.

How powerful is this temptation? Very. And enablers abound. Consider, for example, the graphic below, which appears on the homepage of SBTI. What does it suggest? That within five months (roughly), return will exceed investment. That within twelve months, return will be more than three times greater than investment. In short, it suggests candy. Which I suppose might be okay, if that’s what you are looking for. And if you are a deployment leader, it probably is what your boss is looking for. 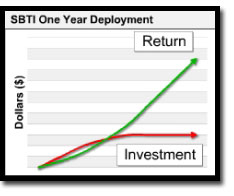 The trouble is, just because our kids want ice cream for breakfast every morning, feeding it to them doesn’t make us good parents. The entire point of an intensive methodology like Six Sigma is to go after difficult, thorny problems. The kind that have been around for a long time. The ones with solutions that are not obvious. The ones that require time, effort, expertise, creativity, deep thought, and hard work to solve. For goodness sake – if you have a list of projects that can be easily solved and deliver return on investment within five months, what on earth are you messing around with Black Belt training for? You don’t need Six Sigma, you just need focus.

Perhaps the most concrete manifestation of this phenomenon is Six Sigma training. Those of you who have lived through Six Sigma deployments, tell me if the following conversation sounds familiar: “Black Belt training? Way too long – we can’t spare our people for four months.” How about Green Belt training? “Two months is better – but how about we do the second week online so they don’t have to travel?” Well…I guess we could… . “In fact, can we do the whole thing online?” Um, not really… . “Perfect! And we can get champions through in a single day, right?” Curricula shrink to the point of becoming series of self-evident statements spread over PowerPoint slides. Any sense of challenge and achievement disappears. The chance to modify the behavior of a class over a significant time period evaporates. But, boy, do we ever get good a delivering a snappy one-day class.

If you think I’m exaggerating, I encourage you to troll the websites of major and minor providers of Six Sigma training today. You’ll find a lot of candy. Six day, online MBB certification, anyone?

You already know where I’m heading with this. Like I said in the beginning, it is something we all realize intellectually. It’s just tough to actually do it. Our job as Six Sigma professionals can’t be to dispense candy to the organization. No more ice cream for breakfast. Even though it’s no fun for anyone involved, we need to become the bringers of organizational All Bran. We all know what to do, we just need to have the courage to do it.

(One final note: Shortly after I wrote this entry I stumbled across this article by Mark Kiemele on the Air Academy website, which makes many of the same points I make here.)