Edutainment Has Its Place Within the Change Initiative

There are two schools of thought when it comes to engaging employees … either in training or for roles within a change initiative.

One says that it is perfectly fine (even necessary) to infuse such efforts with elements of entertainment, creativity … (dare we say) fun.

The other says that such frivolity should be avoided at all costs. In fact, the March/April issue of iSixSigma Magazine will feature an article on training that includes this advice from one Master Black Belt: “Take a pass on infotainment. If anecdotal stories and training games boosted the bottom line, the top line or any line for that matter, then training budgets would only increase each year across all industries. The fact is, they don’t. While some experiments are designed to engage the students and encourage creativity in problem solving, unfortunately, many stories, anecdotes and training games do little more than prevent the least motivated students from losing consciousness.”

In my experience as a Continuous Improvement and Operational Excellence trainee and as a CI trainer/team leader, I have found that infotainment (or, as I have always called it, edutainment) provides learning, recruiting, motivational and bottom-line benefits. I’m not saying that training or Six Sigma/CI team work should be all fun and games. I just feel that, when used in the correct dosage, it enables greater results than a staid, cut-and-dried approach.

For background, I will share some of my experiences as a CI team leader at one of my past employers.

When this company – a U.S.-based firm with holdings in the manufacturing, distribution and publishing sectors – sought to roll out training, recruit leaders and develop teams for a formal CI initiative, those calls were met with a resounding groan. “Why are we doing this?” “I’m busy enough as it is.” “We tried something like this before and it didn’t work.” “That’s fine, just don’t ask me.” The lack of CI enthusiasm was especially prevalent at the publishing division located in Wisconsin (my home base). I stepped forward to take the weeklong training to be a team leader and, afterward, realized that there was a lot of potential … if I could get anyone to listen, accept an assignment on a CI team, go through my training to be a team member and/or not try to sabotage the initiative.

My strategy was to make change management fun; the office’s Continuous Improvement initiative became the Continuous Improvement Agency, or CIA. Using the spy theme in everything that we did (from training exercises to problem identification to project deployment), the effort gained amazing momentum. The dark sunglasses, briefcases, secret meeting places and code words turned plenty of heads. As word spread that the training sessions and work projects were fun (and bringing solid return on investment to the company), the groans turned into growls. “I want this!” “Put me on a team!” “Bring CI into my area!” Even the grumpiest guys in the building wanted a piece of this.

When I moved on from that company, the CI efforts (and the CIA) continued. I attributed that staying power to the power of edutainment.

Again, I’m not saying this method is for everyone, or that entertainment is the only way to educate or foster employee engagement. I just know that it can work. I’ve seen it turn a “Mission Impossible” into a mission that’s possible. 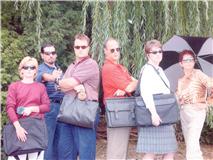