Definition of Trivial Many:

Overview: What are the trivial many?

In 1906, famed Italian economist Vilfredo Pareto, showed that approximately 80% of the land in Italy was owned by 20% of the population. Management consultant Joseph M. Juran, who had studied the work of Pareto, realized the 80/20 principle had broader applications especially in the context of quality control. He named his generalized approach the Pareto Principle and developed the Pareto Chart as a simple way to display the information. He termed the 80% the vital few and the remaining 20% the trivial many. Later on, he realized you can’t ignore the remaining 20% and re-termed the phrase trivial many to useful many. The graphic below shows the format of a Pareto chart. 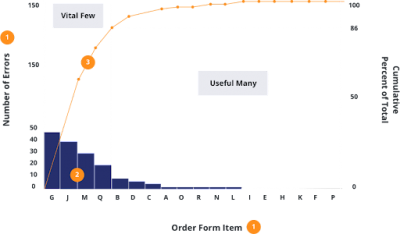 Vital Few versus Useful Many

An industry example of the trivial many

The plant superintendent of a large glass making facility needed to reduce the amount of glass defects. He collected quality control information and made the following Pareto Chart. The software program he used automatically highlighted which areas he should focus on to identify the vital few causes. They are shown in red. If you add the fifth cause, you achieve the 80% which defines the vital few. Since Broken was the top cause at 25% of all the defects, the superintendent formed a team to try and reduce broken glass panels. 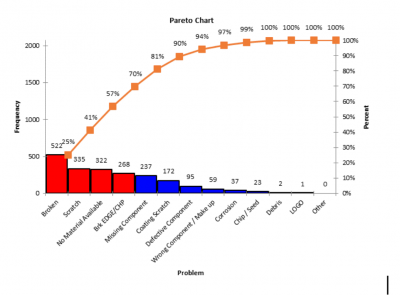 Frequently Asked Questions (FAQ) about the trivial many

1. Who coined the phrase trivial many?

Joseph Juran, a well known quality expert, developed the Pareto Principle (80/20 rule) based on the work of Vilfredo Pareto. Juran used the phrase vital few to describe the 80% of the factors contributing to the problem while he called the remaining 20% of the factors, the trivial many.

For example, the 80/20 rule would say that 80% of your business comes from 20% of your customers. Or 80% of your work absences come from 20% of your people. The actual values of 80 and 20 are not exact but an approximation which seems to have wide application in many areas.

3. Why did Juran re-phrase trivial many to useful many?

Juran realized that the 20% of reasons or causes could not just be ignored. There was information to learn even from the less frequent causes.