In 1959, there was a commercial for mints where a set of twin girls argued whether Certs was a candy mint or a breath mint. Today, there are similar arguments about what Six Sigma is. Some say it is a statistical symbol and metric. Others describe it as a management philosophy. And many claim it is an improvement methodology. They are all correct.

Six Sigma at many organizations simply means a measure of quality that strives for near perfection. Six Sigma is a disciplined, data-driven approach and methodology for eliminating defects (driving toward six standard deviations between the mean and the nearest specification limit) in any process — from manufacturing to transactional and from product to service.

We will get into all of these finer points of what Six Sigma is, but first, let’s take a trip down memory lane and review the early development and evolution of Six Sigma. The focus will be on the foundational elements, people, and companies. Six Sigma continues to evolve today.

1798 — Eli Whitney introduced the foundation for the assembly line.

1809 — One of the central pillars of statistical theory used in Six Sigma is the Normal Distribution, which was developed by the German mathematician Friedrich Gauss.

1913 — Henry Ford introduced his automobile assembly line and the concept of product standardization.

1924 — Dr. Walter A. Shewhart developed the control chart to better understand the difference between common and special cause variation. Shewhart also introduced the PDCA (Plan-Do-Check-Act) in 1929 which was made popular by Dr. W. Edwards Deming in the 1950s. PDCA served as the basis for the development of the Six Sigma methodology, DMAIC.

1950 — Dr. W. Edwards Deming, at the invitation of General McArthur, went to Japan to explain the application of statistical concepts in industrial processes.

1954 — Joseph Juran was invited to visit Japan to share his quality concepts.

1986 — Bill Smith, an engineer at Motorola along with several other people including Dr. Mikel Harry and CEO Bob Galvin, developed the idea and term Six Sigma to significantly reduce product defects. Smith is known as the Father of Six Sigma. Smith and Harry worked together to come up with a four-stage problem-solving approach: measure, analyze, improve, control (MAIC), which became a cornerstone for the Six Sigma process, later called DMAIC.

1987 — The Malcolm Baldrige National Quality Award was created to recognize U.S. organizations for performance excellence. Motorola was one of the three winners during this inaugural year.

1993 — Allied Signal, under the leadership of Larry Bossidy, adopted Six Sigma. Bossidy then tells his friend Jack Welch, the CEO of GE, about Six Sigma. Anecdotally, this took place during a golf game.

1994 — Dr. Mikel Harry, along with Mr. Richard Schroeder establish the Six Sigma Academy as the prime contractor for implementing Six Sigma at Allied Signal. They become a driving force for the expansion of Six Sigma.

1995 — General Electric started their Six Sigma journey in 1995 under the leadership of Jack Welch, the CEO. Dr. Mikel Harry trains the first wave of Master Black Belts at GE.

Six Sigma as a statistical symbol and metric

A process is often described as being Six Sigma if the closest specification is at least six standard deviations away from the mean. If your specification is that far away, then Six Sigma will be defined as a process having 3.4 defects per million opportunities (DPMO). 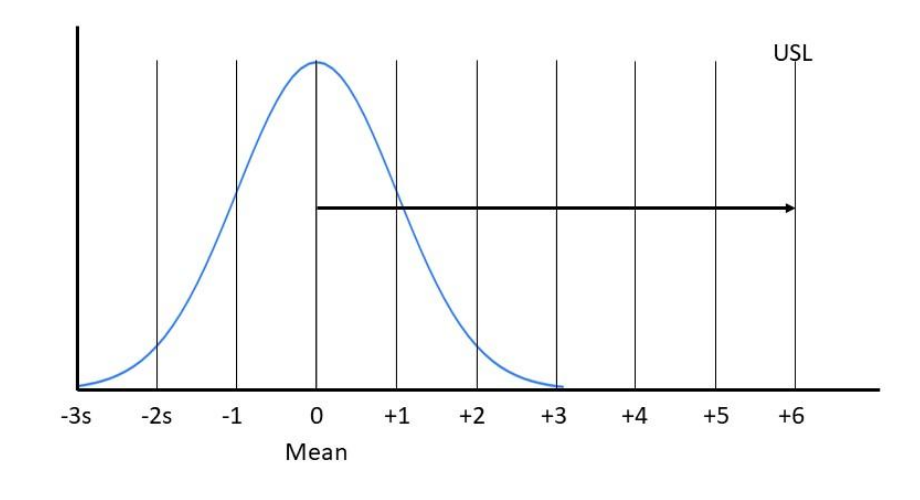 Six Sigma as a management philosophy

While there may be some differences in what principles to include to define Six Sigma as a philosophy, many agree that Six Sigma is based on the principles of:

Six Sigma as an improvement methodology

Unfortunately, a philosophy alone won’t create change or improvement in your organization. You will need to implement and execute a structured methodology driven by senior leadership commitment and engagement and widespread organizational involvement. This will encompass structure, definable roles, methods, and tools. Let’s look at each element.

The improvement in your organizational processes will primarily be a result of teams of employees executing improvement projects linked to key strategic, tactical, and operational improvement opportunities.

The structure of your Six Sigma deployment should include leadership commitment and engagement along with specialized resources to support and guide your teams in the use of specific Six Sigma tools and methodologies.

Dr. Mikel Harry is often credited with adapting the martial art concept of belt rankings to Six Sigma. The hierarchy of belts indicates the level of training, competency, and acquisition of skills. While different organizations may have different names and colors for the levels of expertise in Six Sigma, the following represents the most common levels of achievement with the Master Black Belt being the most advanced and White Belt being an introductory level. The Champion serves the role as a deployment leader.

There are two broad categories of roles in your Six Sigma deployment. One involves the individuals responsible for the overall execution and eventual success of the program effort. The other main role is associated with the portfolio of improvement projects. Here is a description of the program roles: 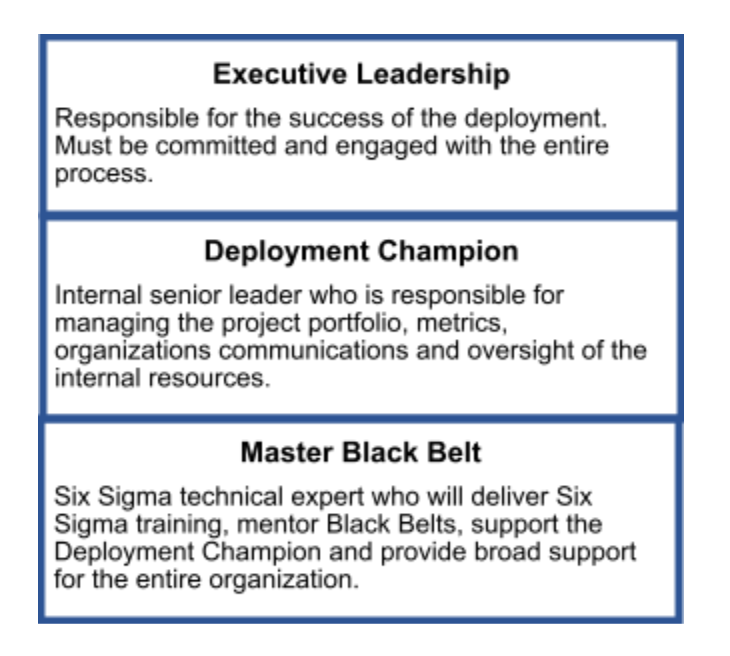 Here are the project roles:

There are multiple methodologies in Six Sigma. Some are designed for continuous incremental improvements while others are for dramatic breakthrough change. The most common Six Sigma method is known as DMAIC. The graphic below shows this structured 5 stage sequential approach.

Your project team will follow the DMAIC stages while completing specific activities and deliverables. Most projects can be completed within 3 to 4 months of time depending on the complexity of the project and the time allocated to each stage.

There are similar methodologies and approaches for making more dramatic improvements or for situations where there are no existing processes. While the acronyms are different, the underlying activities and outcomes are quite similar. The more popular approaches are called DMADV (Define, Measure, Analyze, Design and Verify), DfSS (Design for Six Sigma) and DMEDI (Define, Measure, Explore, Develop, Implement).

Here is a comparison of DMAIC and DMEDI:

While there are almost more Six Sigma tool than a person can count, here are a few of the most common ones listed for each stage of DMAIC. 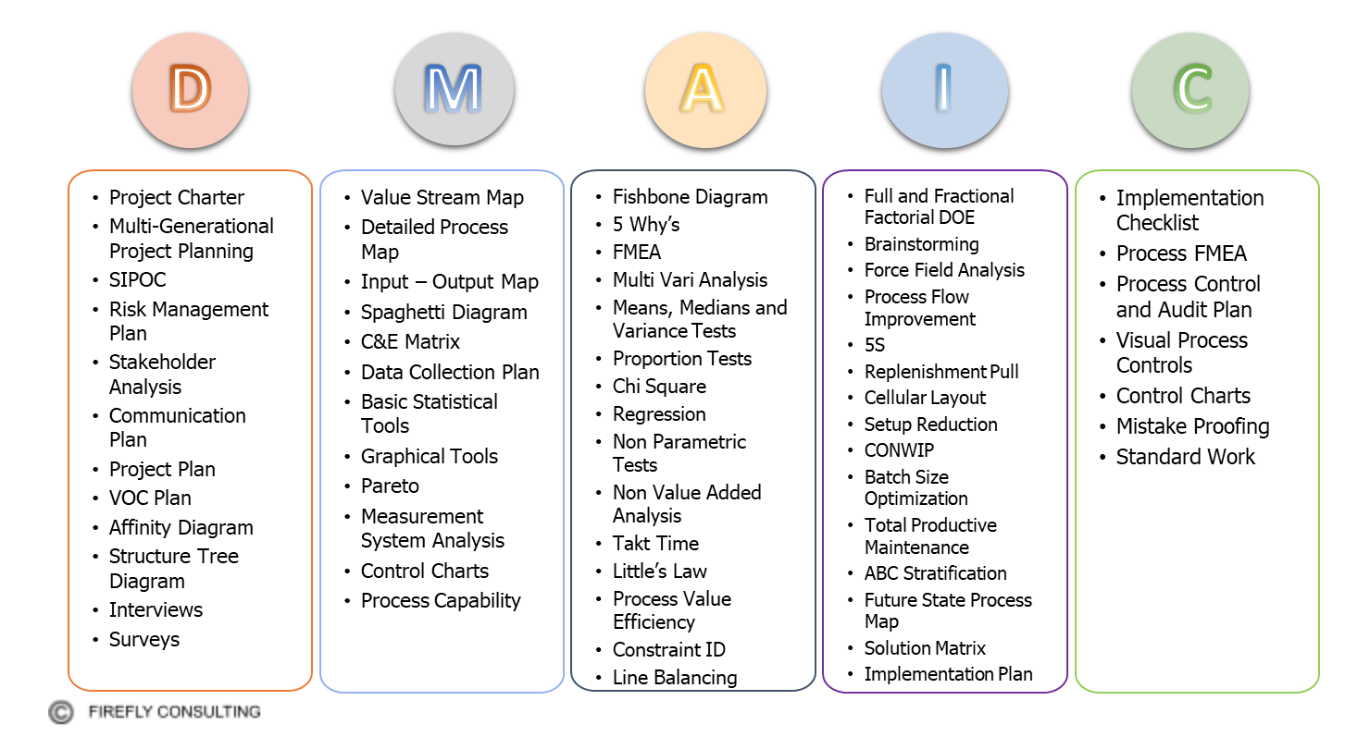 It is not expected that you use every tool for every project. Depending on the specifics of your project, you will select and use the most relevant ones.

While you may see postings for employment in Six Sigma roles for a Deployment Champion, Master Black Belt (MBB) and Black Belt (BB), the most frequent will be for the MBB and BB. These are considered full time professional level positions. While you might see a required or recommended Green Belt (GB) as part of a more extensive list of job requirements, the GB is a part time role and is rarely a standalone job posting.

Benefits of Six Sigma for your organization

Many organizations have implemented Six Sigma and, while individual results may have varied, there are a core set of benefits which they all should have achieved. They are:

Whether you call your improvement effort Six Sigma, Operational Excellence, Zero Defects, Total Quality Management, Continuous Improvement or any other name, the elements should be the same. Your purpose is to improve everything your organization does. Your approach should be structured, and data driven. Using DMAIC and other methodologies will provide the roadmap for your improvement journey.

You will need to have your senior leadership committed and engaged to have any chance for long term success. You will likely need expert resources. Whether you call them Master Black Belts, Black Belts or Green Belts isn’t as important as the skills they must have to help drive change throughout your organization.

Change won’t happen overnight. It took GE three years to “get it”. Yes, you will get early successes but remain patient because it might be 5 years before you see the transformation throughout your organization. Six Sigma works. The key is whether you and your organization can embrace it and make it work for you.