Overview: What is reproducibility?

Measurement System Analysis (MSA), is a formal statistical study that determines whether your measurement system is capable of providing reliable data so that you can make the best possible data-driven decisions. The statistical study used for continuous data is called a Gage R&R study. The R’s stand for Repeatability and Reproducibility.

An industry example of reproducibility

Jane, a Six Sigma Master Black Belt (MBB) was reviewing the results of a MSA study to see if there were any issues with repeatability and reproducibility. Below are some of the graphs she was analyzing. 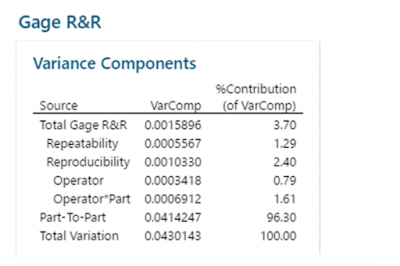 Jane noticed that, while the Total Gage R&R was acceptable (less than 10%), the reproducibility component was almost twice that of repeatability (2.40% vs 1.29%). This indicates the gage was consistent, but there was some variation between the three operators in how they measured the study objects.

Reproducibility may be seen if there are significant differences in the operator patterns generated by each operator measuring the same samples. Jane concluded the patterns were sufficiently similar to claim good reproducibility.

1. Why is reproducibility important?

2. How is reproducibility different from repeatability?

3. If my measurement reproducibility is poor what can I do about it?

The first question to ask is why are you using multiple people for your measurements? Can you use less or even one person? You can also try to provide better operational definitions of how to measure an object.