In this article, we will define what is Six Sigma from a variety of perspectives. The benefits of Six Sigma will be presented along with how it can be used in your organization and some best practices when applying the varying definitions.

Six Sigma has been defined in three ways:

Let’s dive a little deeper into each of those.

Six Sigma as a metric 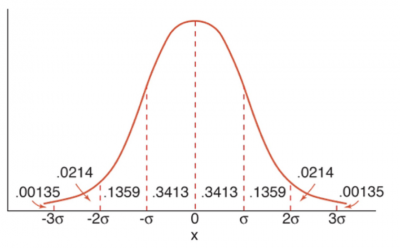 6S is also frequently used when talking about process capability. In this situation, a six sigma process is defined as one where the closest specification is six standard deviations away from the mean. This can also be defined as a process having only 3.4 defects per million opportunities, or DPMO. 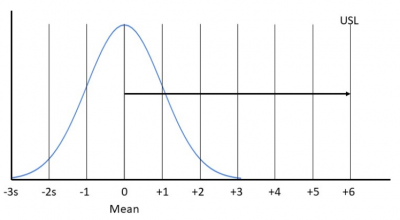 Six Sigma as a methodology

You often hear of a company deploying a Six Sigma effort. That means they’re trying to improve their organizational processes to achieve a high level of quality and performance.

The Six Sigma methodology was developed in 1986 by Bill Smith, an engineer at Motorola. Subsequently, the methodology and concepts were adopted by Honeywell, Allied Signal, and GE. Many of the world’s best-known companies have tried or are currently implementing some version of Six Sigma. More recently, Six Sigma was combined with the concept and tools of lean manufacturing to form the Lean Six Sigma (LSS) approach to organizational improvement.

The foundation of the Six Sigma methodology is based on a five-step process referred to as DMAIC (Define-Measure-Analyze-Improve-Control). The deployment of Six Sigma can range from a simple problem-solving approach to an organization-wide transformation. The process utilizes specialized and certified professionals who are trained in the DMAIC methodology. These roles are typically referred to as Green Belts, Black Belts, and Master Black Belts.

Six Sigma as a philosophy

While we have already defined Six Sigma as a measurement (or metric) as well as a methodology, it also can be defined as a continuous improvement management philosophy. The philosophy is based on the principles that all work can be defined as a process, all processes can be improved, variation should be reduced, and decisions should be fact-based and data-driven.

The primary benefits of Six Sigma come from the implementation of the methodology.

By applying the tools of DMAIC, you will be able to measure, analyze, and improve your process to eliminate waste and defects regardless of your organizational function.

Jack Welch of GE used to say, “Variation is evil.” What he meant was that a customer wants predictability when it comes to your product quality, delivery, and all other aspects of your business relationship.

Referring to the two benefits above, it’s easy to see how reducing waste, defects, and variation will make your customers happier — especially if you can translate that into a lower price based on your own lower costs.

Why is Six Sigma important to understand?

It is the understanding of the statistical definition of Six Sigma that will be important.

Deploying a Six Sigma effort in your organization will be a big challenge. Your understanding of all the moving parts of a Six Sigma deployment will be critical to achieving successful outcomes.

A global company producing coffee was having a problem with the fill level of the cans they were packing the coffee in. Because of the variation of their filling process, they were filling some cans less than the allowable lower specification. This meant they were packing the cans with less product than was required, which exposed them to the possibility of recall due to the short fills. The company’s Six Sigma Black Belt (BB) was assigned the project to reduce the underfill.

The BB collected some production data from the fill line and did a process capability study. Below, you will see that 5% of the company’s production was below the lower specification, which was an unacceptable rate. Since the process was not centered between the upper and lower specs, the BB suggested that the fill machine be adjusted to shift the process to the right, which brought the left tail of the distribution over. However, the process was still too wide and was at a sigma level of 1.717 — not at the Six Sigma level that was their target. 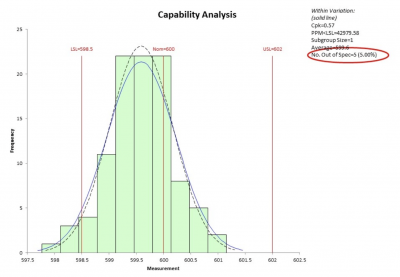 The long-term issue was the variation of the process. The BB formed a team and went to work to identify the sources of variation and eliminate them. After a month of team activity and improvements, the new process was now operating at better than a Six Sigma level with no product out of spec on either side. 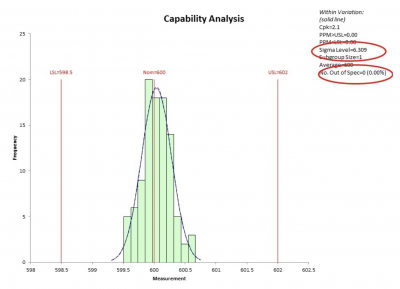 The term Six Sigma has broad applications, but if we focus on Six Sigma in terms of an organizational improvement deployment, there are a few best practices that improve your odds of success.

1. Get a commitment from top leadership

Many leaders are happy to endorse various types of improvement initiatives, but endorsement is not sufficient for an organizational transformation. It’s the all-in commitment and leadership of the effort that is critical for its long-term success.

An all-out transformation requires the appropriate internal resources, which will include a top-notch champion and skilled Black Belts and Master Black Belts. External resources at the beginning will provide the necessary guidance and expertise to start you off on the right foot and keep you from taking missteps as you become more experienced.

Training is a necessary evil of your Six Sigma effort. People need to know what to do and how to do it. But training alone won’t get you the benefits you’re looking for. The focus should be on improving your processes and doing things better. That will require much project work. Don’t worry about the money. If people do the right things, the right way, the money will follow.

1. Can I deploy a Six Sigma effort in a non-manufacturing company?

2. Is Six Sigma a statistical term?

In the context of process capability, the Six Sigma refers to how many standard deviations away from your mean the closest specification is. That defines a Six Sigma process, which translates to 3.4 defects per million opportunities (DPMO).

3. What does it mean to be a Six Sigma Black Belt?

A Six Sigma Black Belt is a professional who is trained and certified in the methodology and tools of Six Sigma. It typically requires four weeks of training in statistics and other improvement tools, passing a comprehensive exam, and completing at least two improvement projects that utilize the Six Sigma tools and result in significant financial savings or performance improvements.

A Black Belt will often continue their education and skill-building with the intent of being certified as a Six Sigma Master Black Belt.

Six Sigma can be used in a wide variety of contexts, including as a statistical measure, a measure of quality, a measure of process capability, and a philosophy and methodology for improving an organization.

You can apply all of those to your organization regardless of what type of business you’re in. Six Sigma has had a significant impact on the business world dating back to the 1980s and is still being used and deployed by many organizations today.