Ask someone to tell you how long their commute is, and they can probably provide an average number without much thought. But ask them how much it varies, and they will most likely have to pause and consider first how to answer that question and then think of actual numbers.

Standard deviation is a single number that quantifies the variation a process and, combined with a measure of central tendency and distribution, allows us to put specific probabilities on certain ranges of values occurring. For example, you could utilize the statistic to identify the range of values that would include 90% of commute times in it.

Overview: What is standard deviation? 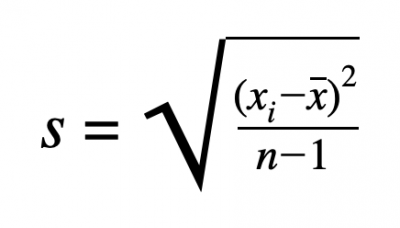 Standard deviation is not some arbitrary measure of variation; in fact, it has some nice properties that make it an attractive statistic to use to describe the spread of a dataset or distribution.

While the range of a dataset may be simpler to explain and calculate, it alone is not particularly informative as it only speaks to how spread apart the most extreme values in the dataset are. Standard deviation provides more information on where most data points will fall, especially when paired with knowledge of a specific distribution.

Why is standard deviation important to understand?

Standard deviation is not just a standalone measure of the spread of a dataset; it’s also used in a wide variety of applications.

It’s the basis for other metrics

It’s also used to calculate test statistics for hypothesis tests, to set the control limits on control charts, and multiple other measures.

It is the standard

Depending on the situation and need, other statistics are used for describing the spread of a dataset, but none are used as frequently as standard deviation. It is the standard measure and provides a common metric used throughout the field of statistics.

An industry example of standard deviation

A manufacturer is supplied with a key raw material necessary for production. It is important to order the raw material far enough ahead of time to ensure it is extremely likely that it will arrive before production begins but, for economic reasons, not too far ahead of time. Due to logistics, potential issues on the vendor’s end and a variety of other reasons, the time from order until receipt varies.

While it’s a very common metric, there are some best practices to consider when utilizing the standard deviation.

While the standard deviation can be calculated for any dataset, it should only be used to understand what to expect in the future for that process if the process has been shown to be stable and remains that way.

While the standard deviation gives a general idea of spread, once the distribution of data is known some very specific probabilities can be calculated from it.

1. How does the standard deviation relate to the variance?

2. What is the difference between population and sample standard deviation?

3. Why does the formula for the sample standard deviation use n-1 in the denominator instead of n, like the mean does?

The best — but not only — measure of spread

The range is simple to calculate. Variances can be added. But standard deviation is king because it combines the use of original units with more complete information to provide the best overall measure of the spread of a dataset.