With about 30 years of continual improvement, modern Lean Six Sigma training has reached a highly didactic level in terms of experiential group learning. For example, instructors use such aids as “statapults” and paper helicopters to teach designed experiments and peanuts or M&M’s candies to help introduce students to attribute pass/fail measurement system analysis.

To this list of fun and recognizable teaching aids can be added marbles and toy cars as another enrichment of Lean Six Sigma classroom training. Through experiments using these aids, students can practice graphical and analytical tools, and also gain a better understanding of the Six Sigma mantra to “control x, then Y will take care of itself.”

To be suitable for Lean Six Sigma training, an exercise needs to fulfill a range of preconditions:

The marble and toy car experiments fit all the conditions above. The team sizes ideally range from three to five people, and the materials needed are inexpensive and easy to carry. The experiments require nothing more than the following materials: 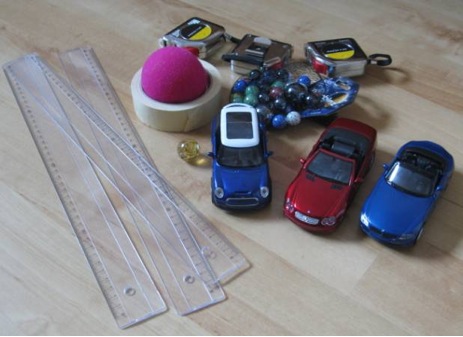 Only a few inexpensive items are needed to conduct these classroom learning experiments.

Marble experiment – For this experiment, the object is to have team members roll a series of marbles down a slope and measure where they come to rest on the floor. From there, team members can use Lean Six Sigma tools to analyze the relationship between the height of the chair and the distance the marbles roll, and predict where marbles will end up after future rolls from different heights.

To set up the marble experiment, students should attach a slope made of flip-chart paper to a chair (Figure 1). To have the marble roll down the same way consistently, a concave slope to the paper is preferable. If available, different teams can set up experiments on different types of floors (stone, carpet, wood, etc.).

Figure 1: Setup of the Marble Experiment

Instructors can ask teams to develop their own definition for the distance the marble will roll after release from a given height. For example, a team might pick the total rolling distance (including the rolling on the slope) as the measure for distance. In Figure 2, this corresponds to height plus distance. When debriefing after the exercise, the instructor can point to the differences in definitions that the teams pick to emphasize the importance of a consistent operational definition.

Toy car experiment – The object of this exercise is similar to the marble experiment, but involves the rolling of toy cars across a flat surface. After the cars are pulled back and released, teams will use a ruler and a tape measure to determine how far the cars have sprung forward.

Once the experiments are set up, teams can brainstorm for potential factors influencing the distances that the marbles or toy cars will roll forward. The factors can then be displayed in an Ishikawa, or fishbone, diagram. For the trainer, this offers an opportunity to review the difference between continuous (variable) and discrete (finite) factors that can affect how far the objects will roll.

After rolling the marbles and cars, trainers can then discuss various forms of graphical analysis to interpret the data. For example, scatter plots can be used for analyzing distance versus height, and individual value charts or box plots can be used to track the distances reached by each of three different marbles rolled multiple times from the same height. To help students review their current understanding, instructors should encourage them to ask questions such as “How would the data look if the factor x were significant?” and “What would the data look like if that factor were not significant?”

The marble or toy car experiments also provide practical experience in linear regression. In this case, the length of the tape measure (e.g. 2 meters) should be used for the upper limit of the “operational range.” A lower limit for the operational range of about 20 centimeters (cm) is reasonable because “noise” due to friction and other influences becomes important for small distances.

Within about 20 minutes, teams are able to study the relation between the distance (Y) and the height (x). For that purpose, they can translate the operational range for Y into the range for x’s and develop a data collection plan to cover the full range with as many data points as possible. Figure 2 displays the data from one such experiment.

Before starting a training session, instructors should ask participants to rank their knowledge of Excel or other analysis tools. If several participants consider their knowledge low, trainers can prepare scatter plots on flip-charts and perform an “eyeball-fit” regression analysis, rather than collect and analyze data in Excel or another software program. The eyeball-fit delivers a relation between Y and x, which also allows control of the process.

Eventually teams can compete against each other. For example, instructors can give a target – to roll the marble or drive the toy car to five different distances, such as 20cm, 50cm, 100cm, 130cm or 160cm. Actual distances are then recorded and teams are scored for their “mean squared offset” – the difference squared of actual to target distances. This is averaged for all distances.

The graph in Figure 2 also shows the 95 percent prediction intervals for rolling a marble. When x is set to a given value, the marble can be predicted (with 95 percent confidence) to roll to a distance between the upper and the lower prediction interval. Statistical analysis software can readily calculate these limits. For the data used here, the two intervals are about 25cm (±12.5cm) apart. If “the customer” (i.e., the trainer) wanted a marble to be rolled to a distance of 150cm with a tolerance of ±20cm, the team could then translate these specification limits for distance (Y) into specification limits for height (x). This method is called rational tolerancing.

Hints for the Trainer

The trainer should try the experiments at least once before using them in class. For example, glass marbles can roll extremely far on polished stone floor. The experiment may then be difficult or even impossible to conduct, unless balls made of rubber or some other softer material are used instead.

Because of the four wheels involved instead of just one sphere, the distances that toy cars roll are associated with higher variation. It is interesting to observe how marbles and toy cars differ in the way that they roll down a slope. Instructors should be sure to let teams compare the results.

Experiments with marbles and toy cars are simple to set up and help deliver key messages during Lean Six Sigma training. Because they involve hands-on data collection and analysis, they can be a fun way to teach concepts.