The Cost of Poor Quality (COPQ) – the cost of defects in the current process, product or service – is the initial financial analysis conducted for a Six Sigma project. It is used to justify initiating a project. And, while COPQ does not contribute to the success of any Six Sigma project, it is valuable in prioritizing projects. Various methodologies are used to estimate COPQ, all of which require some initial measurement. The challenge for any estimation comes when no measurements are available at the initiation of the project. But there is an approach to calculating the cost of the existing process using a weighted risk of potential failures.

At the beginning of Six Sigma projects, most COPQ measurements are determined with an 80 percent confidence level. It is important for Black Belts to rationalize the financial viability of the project to senior management. However, it is common to find that no actual measurements are available at the onset of the project. This makes the COPQ calculation difficult, often resulting in an estimate that has a very small objective component. If Black Belts move the project forward without the financial forecast, they face delays in project completion because of the lack of financial validation.

COPQ also is defined as the current cost of resolving existing failures in a process. This cost is composed of four factors:

The COPQ translates into an estimation of these four components.

Failure Mode and Effects Analysis (FMEA) is a tool used to identify the potential failure modes within a process and to prioritize them based on their severity, occurrence and detection provisions. The Risk Priority Number (RPN) is obtained by estimating the effort required to resolve each incident and the unit dollar cost of such an effort. FMEA is typically used during the Measure or Analyze phase of a DMAIC project, offering a solid basis for estimating COPQ.

Using FMEA, a Black Belt can lead the project team through the following steps to estimate COPQ.

Step 1
* Import all process inputs from, I/O into FEMA tool.
* Remove any uncontrolled factors.
Step 2
Add any potential failures that are not included in I/O.
Step 3
Perform the risk prioritization using the FEMA tool.
Step 4
* Extract all failures and their RPNs from the FEMA tool.
* Estimate average effort and cost/hour to resolve each failure.
Step 5
Calculate the average cost to resolve any failure.
Step 6
Estimate COPQ.

Step 1: Identify the potential causes of failures using the inputs from an input-output diagram and import them into the FMEA tool. Avoid any initial prioritization of inputs such as through a cause-and-effect matrix, to ensure that all possible failure modes are included in the COPQ analysis. Include only controlled factors (inputs) in the analysis. This is important, as existing costs for uncontrolled factors cannot be calculated with confidence.

Step 2: After importing the inputs, review the list with the team to ensure all potential failures are identified. Include every possible failure even if the process has not experienced it. If there is a risk for failure, the team must identify it and include the potential cost of failure in the COPQ calculation.

Step 3: Perform the risk prioritization calculation for each individual potential failure mode by using the FMEA tool. Record the Risk Priority Number values as a calculation of severity, occurrence and detection scores as follows:

Step 4: Using team inputs and any available estimation tools, calculate the average cost to resolve (ACR) for each potential cause of failure. The cost will be a multiple of estimated effort hours to resolve (EHR) and the average cost per effort hour (ACH). Note that the estimation in this step tends to have a 90- to 95-percent confidence level, which is an acceptable level for isolating the COPQ.

Step 5: Calculate the average effort cost required to resolve a random incident by using the weighted average of time to resolve the failure weighted by the risk priority of each failure.

Step 6: Calculate the COPQ for the project by multiplying the random incident cost and the potential reduction in incidents (per year) as identified in the project charter.

COPQ = WACR x Reduction in Events Due to the Project

A Six Sigma team at a financial services firm was assigned the task to reduce the number of monthly customer trade failures by 200. No data was collected in the past on the primary metric and all the team knew was that there were a large number of trades failing every month. Due to lack of measurements, the team struggled to estimate the COPQ. This financial forecast was extremely important to validate the project and ensure timely completion. Solution: The team used the risk prioritization approach using FMEA to estimate COPQ:

Step 1: The team used an input-output diagram to identify all potential causes of failure. Four causes were identified which were imported into the FMEA tool.

Handpicked Content:   How to Explain Six Sigma by Using the Profit Triangle

Step 2: The team then met for another brainstorming session to identify any additional causes. This resulted in the addition of another cause, bringing the total to five. 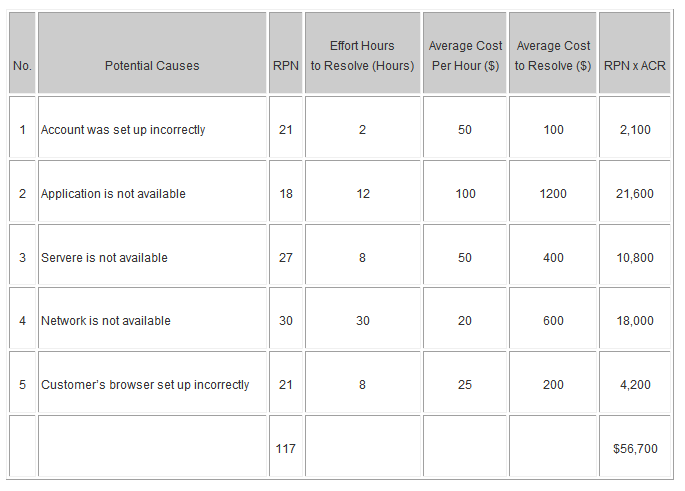 Step 5: Using the above average cost per event, the weighted average cost to resolve a random event was estimated:

Step 6: Finally, the project COPQ was estimated by multiplying the random incident cost and the potential reduction in incidents (per year).

The COPQ calculation is summarized as:

If the Six Sigma project team is struggling to calculate the COPQ and is reaching the end of the Measure phase, an advanced FMEA approach is helpful in obtaining this calculation. This approach lends objectivity to the estimation of COPQ when no measurements are available at the project initiation stage. Additionally, as FMEA offers a structured approach, this calculation method becomes easy to use. When capturing the dependence of any event’s cost on its severity, occurrence and the ability to detect it, the derived COPQ offers a closer estimate to the actual project benefit.