One common problem many companies run into when starting Six Sigma and Lean efforts is what projects to choose. If they choose unwisely, the whole effort can be stalled or abandoned because the results may not be impressive enough to gain momentum for the cause. New practitioners should be wary of an initial project that solves a company crisis. The best strategy for most companies starting out is to focus on small projects with substantial monetary savings potential. Later, once the Six Sigma process has gained momentum, the emphasis should be shifted toward customer satisfaction projects. By selecting projects using a predetermined point system, practitioners can move forward with the projects that are most likely to help the Six Sigma effort in the long run.

Project size should not be underemphasized, especially in the earlier projects. Large projects can tie up resources and have delayed results. The problem with starting off with a large-scale initial project is the amount of time required for optimization and data gathering is highly visible, while the payoff and the measurements of the payoff come later when the project is completed. By then, the Lean or Six Sigma effort may already be a well used target by its skeptics. This can cause a negative momentum, allowing the final favorable results to be buried under the stigma of the extra time and effort initially required to get the project right. It is also easy for people at an organization, especially those wanting to deflect blame for their part in a failure, to blame project failure on the new concept.

Maxwell Planck said, “A scientific truth does not triumph by convincing its opponents and making them see the light, but rather because its opponents eventually die and a new generation grows up that is familiar with it.” Starting a Six Sigma effort does not require its detractors to die, but it often requires that they be beaten down by overwhelming evidence of the methodology’s benefits.

One way to choose Six Sigma projects is by listing possible projects in a worksheet and rating them with an agreed-upon scale (Table 1). There should be a high emphasis on low time and high monetary improvement. The initial project selection criteria leads the initial efforts to pick the low-hanging fruit projects. This energizes the team and starts the process of racking up evidence of the benefits of Six Sigma. After the effort is established – when six to eight success stories are complete – the criteria can be adopted to best meet the company’s long-term goals.

After this list is established, the team must come together and rate each project using the criteria for initial projects (Table 2). It is best if this selection team is five people or fewer. Each member of the team is given a vote on the number to be assigned in each category with the average value of the team votes assigned to the selector. Using an average prevents arguments and moves the selection process along – trying to get the whole team to agree on a specific number is usually counterproductive and time consuming. A short discussion or debate before each vote on the project’s merits or shortcomings in each category is helpful in reminding each member of the criteria being considered. This selection team requires a strong moderator who can act independently and keep the group on track, usually the team leader. This process can require multiple meetings because Six Sigma and Lean are measurement based, and real numbers (or at least good estimates) are required to complete the chart. 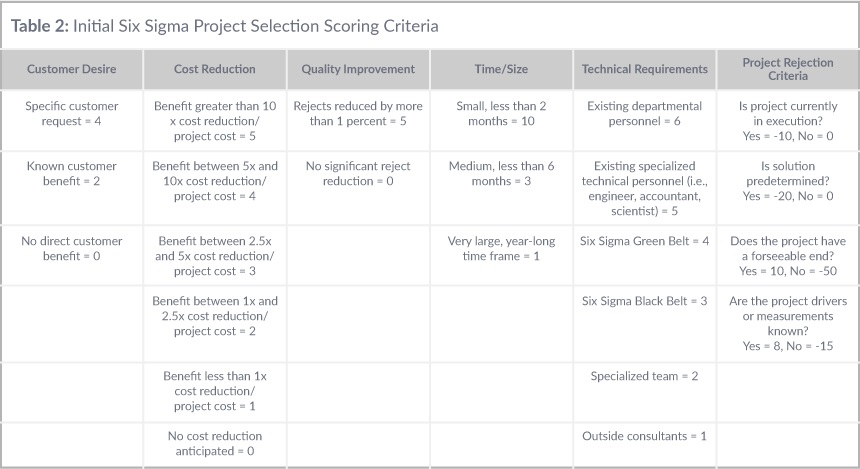 The list is put in order from highest score to lowest total score. The top projects should then be presented to the team. The best project to start with is often not the one on the top of the list, but one close to the top that has unique merits (it is an easy project or might have some special visibility with someone who could help the effort).

After the Six Sigma effort is established, the criteria can be adjusted to best match the company’s benefit as a whole. Table 3 shows an example of the adjusted criteria for selecting projects for a mature Six Sigma effort. There is now a higher customer emphasis in the selection process, which allows the established and experienced team to get more notoriety, and deal with the most important issues in the company. Also, larger projects are emphasized as the team and its reputation grows. 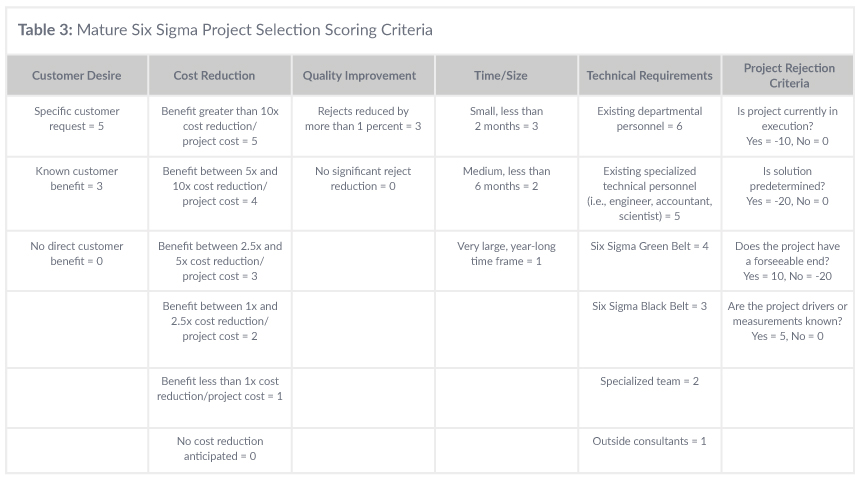 The ability to adapt the principles of Lean and Six Sigma to a specific company are the key to successful implementation and the achievement of the maximized values. Six Sigma and Lean require culture change, and the best approach is most often evolution, and not revolution.