It seems simple, but it is easy to make simple things complicated. Too much attention to politics and control will spoil a team’s chemistry. A few guidelines, though, can make the process of building a productive project team less painful and more successful.

First, the make-up of a Six Sigma project team will need to change a little as it moves through the process improvement phases. There will be a core group of members all the way through, but there also will be a shifting of other members depending upon what the team needs at the time.

Team members can be considered one of three types: regular, ad hoc and resource members. The regular team members are the core group who attend all meetings, unless advised otherwise, and participate in all team activities. Ad hoc team members participate only when the team requires their expertise. Lastly, resource team members are sources of information, resources (time, money, etc.) or coaching, and attend meetings at the discretion of the team leader. 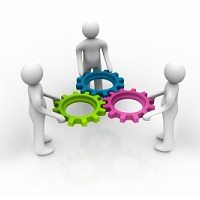 Second, team members should represent various functions or areas of expertise within the business. A process improvement team should include a process owner, a process expert, a budget and accounting member, someone from engineering (if applicable), and maybe even a customer. It also can be helpful to place persons on the team who may work against the team’s progress if left out. Being a team member will give them a vested interest in the outcome of the project.

Third, a team should have a common purpose. This common purpose comes from building a common identity. Team members should know what the business expects from them, as well as anticipate roadblocks and limitations. This third criterion can become sticky. For example, what should a team leader do if he has a team member who is trying to sabotage the team’s work? Unfortunately, this is not an uncommon situation.

Positive team member behavior involves respect – that is, a willingness to show consideration and appreciation for others on the team. Showing respect for others is a cornerstone of a stable society. With it, there is cooperation and progress. Without it, there is stagnation and disintegration. The team environment can be considered a micro-society. A team whose members are respectful of each other, as well the team as a whole, will have the best chance of success.

The appreciation of diversity of opinion is the starting point of positive team dynamics. An underlying purpose for putting a process improvement team together is to have a diversity of opinion. All opinions and ideas have value and contribute to developing a best solution or result.

Diversity of opinion, of course, can also mean the potential for discord and arguments. Agreeing to disagree is an effective method for dealing with conflict and how a team can gain consensus. It is also a means to allow diversity of opinion to exist and to maintain a project’s momentum. By agreeing to disagree, team members do not have to let go of their opinions to continue making progress.

Another important aspect of respect within a team is attendance. Team members have to be present in both body and mind in order to contribute toward the team’s success. If a team member is absent, that person does not contribute to, and indeed can slow, the team’s progress. An unengaged team member presents a similar problem.

Related to attendance, the completion of action items is another element of respect and positive team dynamics. Since teams use tasks and timelines to move a project forward, action items become the vehicle for team progress. The team assigns action items to a responsible person and sets a due date. This makes the team’s progress predictable and the distribution of resources easier to control. When team members do not complete action items on time and/or correctly, the team does not function.

When a team is functioning correctly, all members are contributing – participating, voicing opinions and adding their brainpower to the team’s efforts. One moment someone is giving information, the next they are listening and the next they are negotiating. The resulting high level of energy speeds the team’s progress. It is also more fun.

The team leader plays an important role in making sure that all team members contribute. This may mean asking for the opinion of a reserved member, or slowing down a member who is too dominating. In either case, every team member’s dignity is important.

The responsible person on a team is called a “leader” for a reason – that person is expected to lead and manage, not supervise the team effort. Exceptional leadership skills are necessary for those responsible for managing an improvement team. A leader gets their power from people being willing to follow (a team environment), while supervisors get their power from higher levels of management (a command-and-control environment). In fact, a supervisory approach to team management will likely prevent success because process improvement is a what-do-you-think activity, not a do-as-you-are-told activity.

Some types of team member behavior will hinder a team’s progress. An example is an individual who is on the team because it is part of their performance evaluation criteria. This person is not there in support of the team’s objectives; they are there to service their own needs. This team member can  sometimes find pleasure in hindering team progress with arguments that have no substance or by not helping with action items.

The “card player” is another example of an ineffective team member. This person is quietly paying attention to the ebb and flow of power. They align themselves with the winning side on issues and rarely express divergent opinions. Their actions are focused on keeping themselves on the correct side – that is, the prevailing point of view – of issues. This type of participant is politically minded rather than concerned with the project’s success. As a result, their contribution can bias the results of team activities such as scoring matrices, brainstorming and multivoting.

An especially dangerous attitude is associated with the team member who represents their boss. This person is following orders and is expected to express the views of their boss rather than their own opinions. When this is used a means of controlling the team’s actions, there will be problems. This boss’ opinion (shared from an external viewpoint) can be valuable as long as it is not subversive. The danger for the team is when information is withheld, or conclusions are biased because someone in a position of power is protecting the status quo or attacking something that the team is working on.

Dealing with conflict is an important team function. Since conflict is unavoidable in a team environment, it is lucky that it is a desirable component of teamwork. The team should embrace conflict that results from diversity of opinion. The team leader, however, will need to intervene when conflict becomes personal or destructive. Some responsibility lies with the other team members as well to prevent conflict that pauses mission progress. A set of ground rules will help:

Conflict in and of itself is not a problem unless it is not dealt with respectfully. A team that has individuals who do not show mutual respect for each other will not be effective. From a team leader perspective, there may come a time when they have to remove a member from the team. This is a severe action and is a last resort. The forcible exit of a former team member will create internal and external repercussions for the team.

The team – whether a sports team, an academic team or a business project team – that keeps its focus has the best chance of success. Keeping focus means controlling the pressure to spend time on individual or political concerns. As the adage goes, a team is only as strong as its weakest link. And the strongest teams are the ones that adjust team composition as needed, show respect to fellow team members and manage conflict effectively.