Both the consumer and the producer may be impacted by hypothesis testing errors. This article will focus on the consumer’s risk — how to manage it and some tips on how to reduce or eliminate the risk to the consumer.

Overview: What is consumer’s risk?

Let’s start with a discussion of what hypothesis testing is all about. This will serve as the basis for our discussion of consumer’s risk.

Here are the first few steps for completing a hypothesis test: 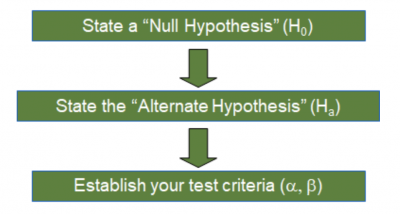 You use sample data to determine whether or not you can be statistically confident in rejecting the Ho. If you do reject the Ho, your statistical conclusion is that the alternative or alternate hypothesis Ha is true. There’s a risk you’ll make an error in your decision to reject or not reject the Ho. As the researcher, you choose the level of risk you’re willing to accept for this error.

You can make one of two errors when deciding what to do about the Ho.

We can illustrate these errors in the graphic below. 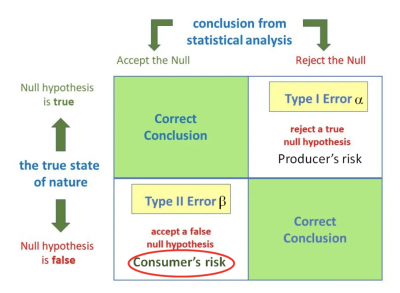 The consumer’s risk, or Beta, is associated with the concept of power. Power is defined as the ability to see something significant if it exists.

The more power you have, the better you will be able to prevent consumer’s risk by reducing the chance of failing to reject the Ho when you should. Power is increased by using larger sample sizes. In our example above, if there was sufficient power of the hypothesis test, you would have found the defective part and not shipped it to your customer.

3 benefits of identifying the consumer’s risk

Your customer will appreciate your efforts to minimize the consumer’s risk.

1. Minimizing consumer’s risk will reduce the chance of sending bad product to your customer

Making Type 2 errors will have you releasing guilty people or releasing new drugs that aren’t effective.

Most statistical software packages allow for the calculation of power. By taking larger sample sizes, you increase power and reduce your consumer’s risk.

3. Removes the burden from your customer

As a producer, you try to balance your risk against your cost. Increasing power costs more, but it reduces the risk to your customer. Consider shifting the burden of consumer’s risk for your customer to producer’s risk while you figure out how to reduce both.

Why is consumer’s risk important to understand?

Consumer’s risk can be reduced

By controlling your sample size and power, you can reduce the chance your customer will receive defective products you should have caught before leaving your facility.

Type 1 (producer’s risk) and Type 2 (consumer’s risk) work in opposite directions. It can be tough to decide which one to protect against.

Let’s look at the pharmaceutical industry. Should they protect against consumer or producer risk? If they mistakenly reject a batch of good pills, they would eat the cost of their producer’s risk. If they inadvertently shipped a batch of bad pills to Walgreens, both they and the patient would suffer a consumer’s risk.

It seems the cost of rejecting some good products pales in comparison to shipping bad products to the customer and consumer.

Don’t let your customer be your inspection department

Having your customer find your bad product is not the way to establish a long-term partnership. Consumer’s risk and Type 2 errors can get costly.

An industry example of consumer’s risk

GE Aviation is a producer of aircraft jet engines for the major aircraft manufacturers such as Boeing, Airbus, Bombardier, Embraer, Sikorsky, and Lockheed Martin. One of GE Aviation’s quality analysts (QA) was having a discussion with a QA from Embraer about the concept of producer’s and consumer’s risks.

They both agreed if GE did a quality test on one of the major jet components and rejected it, but it turned out to be within specs, then GE experienced the result of a producer’s risk. This would be a Type 1 error in hypothesis testing terminology since they rejected the Ho when there was no defect in the component.

They also agreed if there was a defective GE component, but QC missed it and shipped it to Embraer, it would be a Type 2 error since they failed to reject the Ho when they should have. That would be a consumer’s risk to Embraer and subsequently, the flying consumer.

If Embraer failed to catch the bad part and installed it in a plane, the flying public would have a more serious consumer’s risk.

Following these few tips will help you reduce your consumer’s risk.

1. Identify your assumed consumer’s risk before doing a hypothesis test

2. Calculate the appropriate sample size ahead of time

Calculate the appropriate sample size for your assumed risk prior to doing data collection and running your hypothesis test.

3. Greater inspection is not the way to reduce consumer’s risk

If you rely on inspection to catch your defective product, there will always be a consumer’s risk of doing business with your organization. Focus on the continuous improvement of everything you do, and you won’t have to worry about failing to catch the bad stuff — since there won’t be any.

1. What kind of error is associated with consumer’s risk?

2. What is a typical value for consumer’s risk?

3. How is power associated with consumer’s risk?

Power is defined as 1-Beta. Failing to reject the Ho when you should depends on the power of your hypothesis test. Higher power means less consumer’s risk because you will make fewer Type 2 errors.

If your sample size is too small, the power of your Hypothesis Test may be too low. A low power may result in not rejecting the Ho when you should. This could lead to you not finding defective products and shipping them to your customer. That is the consumer’s risk of you not having a robust system in place.