What is more misunderstood than the humble control limit? Is it a probability limit? Is it an economic limit? Read on to find out!

Overview: What are control limits? 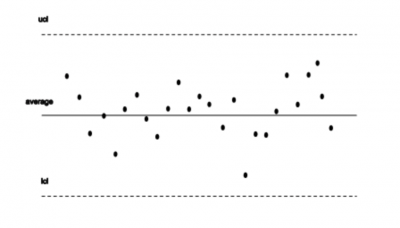 Control limits are calculated from the data that is plotted on the control chart. They are placed +/-3 sigma away from the average line.

Control limits are used to mark the point beyond which a sample value is considered a special cause of variation. They are also used to define the upper and lower limit of the common cause variation.

1. Provide you a guide to what is really happening in your process

2. Take into account both the within and between sample variation

3. Establish the predictable limits of variation for the process measure

It provides a frame for the common cause variation when the process is stable.

Why are control limits important to understand?

Control limits have been around for a long time. Walter Shewhart, a physicist at Bell Laboratories, first wrote about control limits in 1924. He developed control charts to help improve the quality of telephone equipment.

Based on the results of these experiments, and Tchebycheff’s theorem, Dr. Shewhart decided to place control limits at +/- 3 sigma of an average (such as an average or range) so as to minimize the economic loss from two kinds of mistakes.

(Technical Note: Tchebycheff’s theorem provides statistical support for the +/- 3 sigma limits. It states that 89% of any distribution (regardless of shape, center, and spread) will fall within +/- 3 sigma.)

If the control limits were very wide, for example +/- 8 sigma from the average, we would almost never make mistake 1.

If they were very narrow, let’s say, +/- 0.1 sigma from the average, we would almost never make mistake 2.

The 3 sigma limits balance the probability of making both these mistakes. These are the reasons Shewhart used 3-sigma limits.

An industry example of control limits

In this example, a manager is using a control chart to measure the average time to answer a customer question on a helpline.

The manager collected about 20 samples of call times (three calls an hour). He uses a computer program (such as Excel) to plot the samples against the historic upper and lower control limits.

The control chart shows several call time averages to be outside the lower control limit. What can be said about the call time measure?

The manager investigated the calls outside of the lower control limit. He found out they all had been taken by the first shift of workers. The first shift workers were found to have recently taken the new call center training.

All shift workers were given the new training, and subsequent call time averages started to trend downward, showing that the improved training worked.

Control limit formula will vary depending on the statistic (average, range, proportion, count) being plotted. Ensure you are using the right formula!

2. Use the control limits to assess if there is a special cause

If a plotted point goes beyond the upper or lower control limit, it can be considered a special cause. This means the manager/worker should act to find the source of the special cause or respond to the control plan direction for a special cause.

3. Use the control limits to evaluate the predicted spread of common cause variation

When the process is stable, the process measure can be expected to vary randomly between the upper and lower control limits.

What does Deming have to say about control limits?

As Dr. Deming put it:

“Dr. Shewhart invented a new way to think about uniformity and non-uniformity.

He saw two kinds of variation — variation from common causes and variation from special causes. This in itself was a great contribution to knowledge. Although considerations of probability and distributions are basic to the control chart, Shewhart perceived that control limits must serve industry in action.

It was for such reasons that he used 3-sigma limits. Experience of 50 years shows how right he was.”

Should I calculate control limits directly from the data’s standard deviation?

Control limits are one part of a control chart that allows you to identify common and special cause variation. If you understand how control limits were designed to work, then you have the key to effective process improvement.