Some changes in your organization go smoother than others. Sometimes there is resistance to the changes which must be overcome for the change to occur. Force field analysis identifies and analyzes those forces which help drive change and those which restrain or inhibit change. Let’s learn more about those forces and how to manage them to assure your organization can implement needed change without disruption and delays.

Overview: What is a force field analysis?

In simple terms, force field analysis is a framework for understanding the factors which can influence and impact a potential change. This change can be associated with an individual, organizational, or improvement project. For change to happen, the driving (helping) forces must be strengthened, or the resisting (hindering) forces weakened.

The model was originally developed by social psychologist Kurt Lewin, who described the individual change process as a balance between two types of forces – those that are driving movement toward a goal (helping forces) or are blocking movement toward a goal (hindering forces). His theory was expanded by John R. P. French who applied it to organizational and industrial settings.

Here are the steps for completing a force field analysis:

1. Describe and clarify the proposed change and write it in a box in the center of the page.

2. Brainstorm and identify the driving or helping forces for change.

These may include such internal or external things such as:

3. Brainstorm and identify the blocking (resisting or hindering) forces to change.

These may include such things as:

4. Score and weight each factor.

You can score each factor from one (weak) to five (strong), based on the degree of influence each one has on the change. Add the scores up for the driving and resisting forces. For a simple visual presentation, you can use the length of arrows to show the relative strength of each factor. The figure below is an example of what your force field analysis might look like at this point. 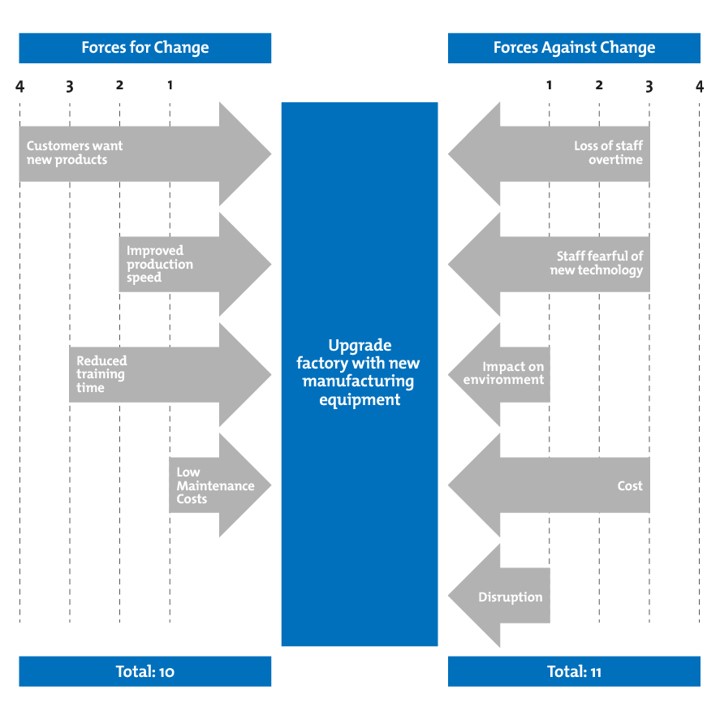 5. Analyze and implement your action plan for change.

What action steps can you take that will achieve the greatest impact? Identify the resources you will need and decide how to implement the action steps. Sometimes it’s easier to reduce the impact of restraining forces than to strengthen driving forces.

3 benefits of a force field analysis

Here are a few of the benefits of using a force field analysis to improve your probability of a successful change in your organization.

Understanding the forces driving or hindering your desired change can help identify what forces are preventing forward movement and what is needed to overcome those barriers.

Attitudes and mindsets are common restraining forces in many organizations. Having an open and honest discussion of why certain things are considered restraining forces, will help your management understand the nature of those emotions and help create more effective communication of the proposed changes.

Employee resistance is a common obstacle to change, and often appears as one of the restraining forces in a force field analysis. Understanding the reasons for that resistance can help you develop appropriate strategies for reducing it.

Why is a force field analysis important to understand?

Understanding the importance and purpose of a force field analysis will help you utilize this powerful tool to optimize your implementation of change in your organization.

The existence of specific forces which will help or hinder change

Organizations are often aware of the negatives which may impact a desired change. But there are also positives which will help facilitate and drive your change. These must be identified and used.

Provide insight into why people may resist your change

While resistance to change is a well-known factor impacting any change process, you need to understand what the underlying reasons for this resistance are.

Flexibility of the force field analysis

This tool can be used to assess a macro change affecting a group of people as well as at the individual level.

An industry example of a force field analysis

As a result of some marketing research, the Vice President of Sales and Marketing formed a Six Sigma improvement team to explore changing the sales process to reduce the time sales-people spend with their customers. Before implementing the recommendations, the team’s Black Belt suggested they do a force field analysis to better understand the possible barriers to a successful implementation of the changes. Below is their analysis. 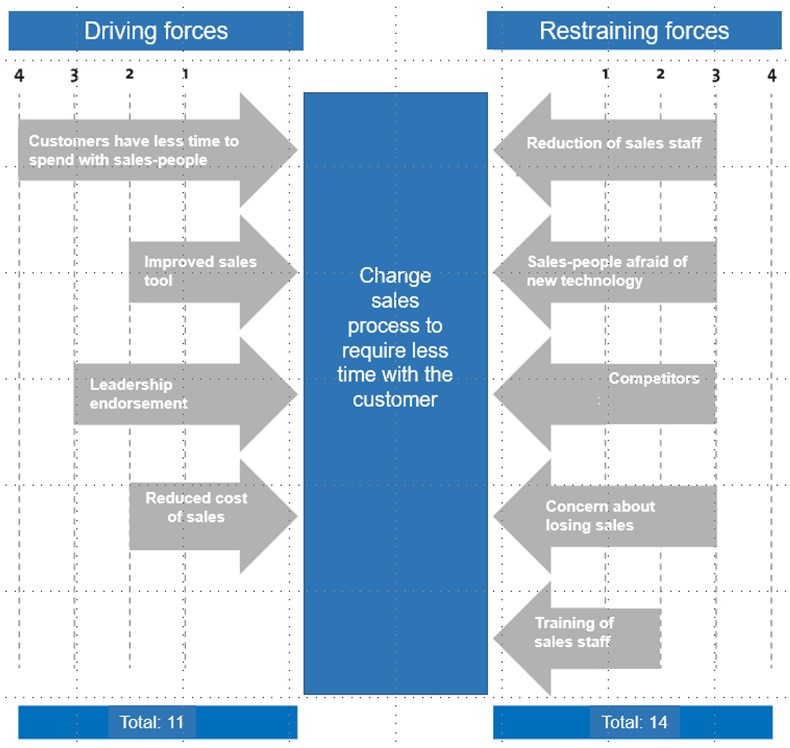 3 best practices when thinking about a force field analysis

Doing a force field analysis is a relatively straightforward process. Use the following tips to help you keep things simple yet constructive.

Conduct formal, structured brainstorming to identify the driving and restraining forces which will impact how well your desired change will work.

3. Do your force field analysis early in the Improve phase of DMAIC

Developing your force field analysis, possibly along with an FMEA, will let you mitigate resistance prior to implementation of your proposed changes.

1. What are the components of a force field analysis?

According to Lewin, there are four components of force field analysis: driving forces, restraining forces, forces for change, and the forces resisting change.

2. When would you use a force field analysis?

3. How would you describe how to do a force field analysis in simple terms?

Force field analysis, as developed by Kurt Lewin, helps you consider the forces for and against a decision or a change.

Develop a scoring scheme for each factor, and add up the scores for each column. You can then decide whether you want to move forward with the change or to change the balance of your forces to get a positive outcome for your desired change. You can use your analysis to develop a strategy and action plan so you can strengthen the forces that support the change and weaken the forces opposing it.