While some data are social creatures and get collected in subgroups, others are more solitary and end up getting collected one at a time. When this is the case, the Individuals-Moving Range, or I-MR, Chart assesses process stability. 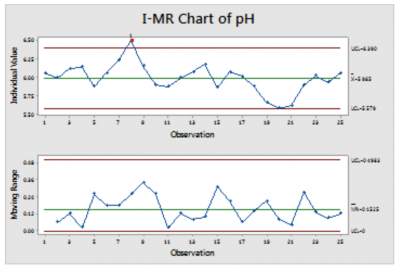 Overview: What is an I-MR Chart?

An I-MR Chart is a type of control chart that is used when the data are continuous and have been collected one at a time. It consists of two charts placed one above the other, as shown above

The top chart is known as an Individuals Chart. The points plotted on the Individuals chart are simply the data points in the dataset, and they are placed across the chart in time order. The center line is the average of the data points, and the control limits are placed three standard deviations away from the center line. In this case, the standard deviation is estimated using the average moving range of the data points to capture short-term variation and ideally exclude longer-term sources of variation.

The bottom chart is a Moving Range chart. The points plotted on this chart are also in time order, but in this case, each represents the absolute difference between that point from the Individuals Chart and the prior point. For example, if the first data point is 8.87 and the second is 8.54, then the first point on the Moving Range Chart, plotted in the second position, is |8.54-8.87| = 0.33. The centerline is calculated using the average moving range divided by an unbiasing constant, and the control limits are set using a multiple of the average moving range.

Like all control charts, I-MR Charts use one or more rules to determine when special cause variation is likely present. The most common rule is a data point outside of the control limits, but others exist including 8 (or 9) consecutive points all on the same side of the center line.

One benefit and one drawback of I-MR Charts

I-MR Charts are powerful for understanding the behavior of a process in which data points are collected individually, but they are not flawless.

1. They provide a single view

I-MR Charts allow a practitioner to assess, in a single view, the stability of both the central tendency, and variation of a process.

2. They are sensitive to distribution

While there is no formal distribution requirement for using an I-MR Chart, data from highly skewed distributions can show higher false alarm rates on one side of the mean and an inability to detect special cause variation using the control limit on the other side of the mean. This can be countered using different detection rules or transformation.

Why are I-MR Charts important to understand?

It would be difficult to execute Lean Six Sigma projects for very long without coming across a situation requiring the use of an I-MR Chart.

The best practice for creating a control chart for continuous data is to collect the data using rational subgrouping; however, many processes make rational subgrouping difficult, if not impossible, or the subgroups represent more than short-term variation. I-MR Charts accommodate this situation — when data were collected one point at a time.

An unstable process is unpredictable, and virtually all of the statistical tools in the toolkit require a stable process to be effective.

An industry example of I-MR Charts

A legal department might be concerned with the time it takes to review contracts and wish to shorten it. Since contracts arrive somewhat randomly one at a time and cover different other parties and needs, there is no obvious way to create rational subgroups for data collection. Rather, each one is a standalone “part” with a cycle time to be measured.

In this situation, an I-MR Chart of the review times might be created to assess the stability of the review process. The chart would allow the project leader to see whether times are randomly scattered around some average and whether the variation in times is stable; conversely, it would identify if special cause variation is likely present.

I-MR Charts can be used in a wide variety of situations and are quite flexible; however, there are some things to keep in mind.

While data does not need to be normally distributed in order to utilize an I-MR Chart, extremely skewed data can cause some undesirable behaviors, including high false-alarm rates and difficulty identifying special cause variation on one side of the centerline.

If data appears skewed, consider whether that is an indication of an out of control process or expected for that type of process, and if expected, consider using rules such as 8 points on the same side of the centerline, or consider a transformation of the data.

3. Use for pseudo-continuous data

Often, we have data that is pseudo-continuous, such as high counts of something or a pre-calculated percentage or proportion. As long as these are generally mound-shaped in distribution – and they typically are – you can likely use an I-MR Chart to assess stability.

1. How are the limits for an I-MR Chart calculated?

2. Does data need to be normally distributed to use an I-MR Chart?

No, but caution should be used for highly-skewed data. If such data is identified and expected for your process, consider additional detection rules or a transformation.

Once the Moving Range Chart has exhibited process stability for variation, review the Individuals Chart using the same process.

A critical tool in the toolkit

Every continuous improvement project should include an assessment of process stability before and after changes, and the I-MR Chart is one of the most common control charts in existence. Every practitioner should be comfortable creating and interpreting one and should make consistent use of it when situations do not allow for data collection in subgroups.