KJ is a simple tool to help you organize ideas into meaningful categories by establishing themes across multiple common ideas.

When you get to the Analyze phase of DMAIC, you will be challenged to come up with ideas on the root causes of your project’s problems. KJ is one of the tools in a sequence of steps to diagnose your process.

Overview: What is KJ?

Jiro Kawakita was an ethnographer whose work in organizing notes when researching problems led to the development of the Affinity Diagram. Since Kawakita developed this tool, it is also referred to as the KJ method or KJ diagram.

The KJ method, or Affinity Diagram, uses the following steps:

Here is what a finished KJ diagram would look like: 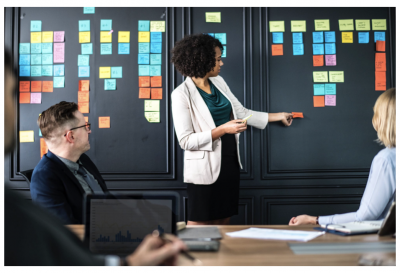 An industry example of KJ

As a result of new FDA requirements, a consumer products company needed to produce new nutrition labels for its products.

Currently, it was costing the company over $400,000 per year to be compliant. A team was formed to analyze the process of printing the new labels to see if some of the waste, or muda, could be eliminated.

The KJ method was chosen to try and identify the root cause of the waste. After brainstorming on reasons for waste, the team took the reasons and created an Affinity, or KJ diagram.

Thanks to the hard work of the team, the entire $400,000 cost was eliminated. The graphic below shows some of the work the team did. 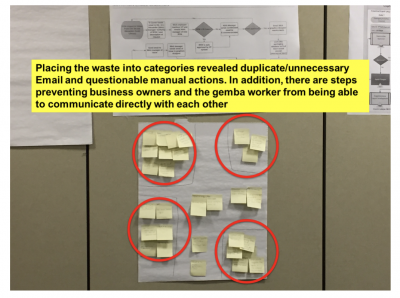 It is a tool for organizing ideas into themes of similar content after a brainstorming session.

2. What is the difference between a KJ and Affinity Diagram?

None. Since the credit for developing the Affinity Diagram approach is attributed to Jiro Kawakita, it is often referred to as the KJ diagram or method.

3. What is the next step after completing a KJ diagram?

Since the KJ diagram is not a deep dive into possible root causes, the next step is to use the themes and ideas as the foundation for developing a Fishbone Diagram which is a deeper dive into the cause and effect relationship of the ideas.