PDCA, also referred to as the Deming Cycle, is a four-step iterative technique used to solve problems and to improve organizational processes. Let’s learn more about this powerful approach to continuous improvement.

Overview: What is PDSA?

Dr. Walter A. Shewhart, the renowned physicist and statistician from Western Electric and Bell Labs, developed the original concept during the 1920s. His approach was a three-step linear problem-solving method. Dr. W. Edwards Deming, the famous quality-control pioneer popularized the technique in the 1950s and took Shewhart’s linear three-step process and revised it to be the iterative four-step cycle he called Plan, Do, Check, Act (PDCA).

In 1986, Deming revised the description of PDCA. Deming wanted to emphasize the importance of not just checking the state of a system, but using that knowledge to better understand the product or process being improved – hence his recommendation to use PDSA as a natural evolution of PDCA.

So, what is PDSA?

The graphic below summarizes the PDSA cycle. 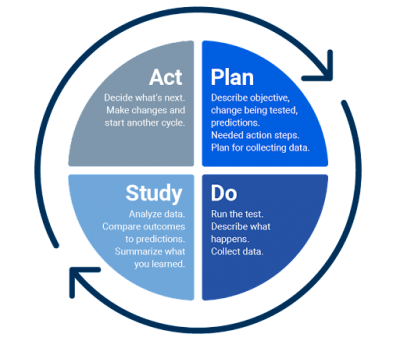 An industry example of PDSA

A large manufacturing company started to experience an increase in reported knee injuries by forklift operators in their warehouse operation. They used PDSA to identify potential root causes, with the obvious recommendations to wear appropriate knee guards as the first solutions to be implemented.

Unfortunately, knee injuries continued despite better compliance. The company completed a second round of PDSA with the conclusion that the standard knee guards didn’t properly fit everyone. As a result they offered additional sizes to select from. A third go at PDSA found that operators were jumping off the forklift before fully stopping it thus putting extra strain on their knees..

Finally, a fourth round of PDSA concluded that the sequence and timing of order picking almost forced the operators to quickly jump on and off the forklift otherwise they couldn’t meet their pick quotas. After a simple revision of the pick schedule and some additional safety training, operators increased their compliance with the safety rule of fully stopping the forklift before getting off.

1. What does PDSA stand for?

It is the acronym for an iterative continuous improvement tool and stands for Plan, Do, Study and Act.

The original concept of an iterative approach to continuous improvement was developed by Dr. Walter Shewhart. Dr. W. Edwards Deming expanded on the concept and developed the PDCA (Plan, Do, Check, Act) cycle. Deming later revised the model by substituting Study(S) for the original Check(C).

3. What is the difference between PDCA and PDSA?

They are essentially the same except for the Check versus Study step. Deming revised the original PDCA to the current PDSA because he felt Check was not adequate to accomplish what he wanted. Check implies you are asking the question “How does the state of the system compare to what you were expecting?” Study, on the other hand, requires you to ask the question “What can we learn from how the state of the system compares to what we were expecting?”