Trend charts are used to monitor your process change over time. They can be used to identify trends going up or down, special patterns or unusual occurrences. Let’s learn more about some of the most common trend charts.

Overview: What are trend charts?

Some of the common trend charts are the run chart, control chart and time series chart. The run chart is just the plotted data with the X axis being time. You can also analyze the pattern or sequence of points. A control chart adds the upper and lower control limits allowing you to determine if the pattern of the data is common or special cause. Time series is based on the concept of looking for patterns in the data and then extrapolating those patterns into the future. This is used in forecasting. Below are examples of each.

An industry example of a trend chart

The company Black Belt (BB) was asked to comment on a trend chart developed by the manufacturing manager. He had noted a series of data points which were all in a row above the center line. He also questioned what was going on with the highest data point at time 25 and the lowest data point at time 80.The chart below is what he was looking at. 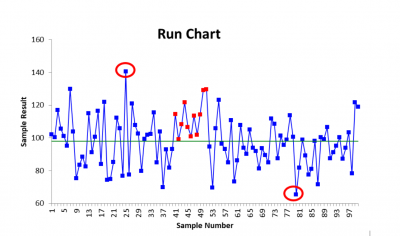 The BB decided to look at the same data as a control chart instead of a run chart. Below is the control chart and the BB’s interpretation.

The BB agreed there was a run of 11 points in a row above the center line. Since that is a signal of special cause variation he suggested the manager investigate and see if he could find an explanation. Apparently there was a momentary shift in the process The BB also pointed out that, since the values for point 25 and 81 are within the control limits they were common cause variation and no immediate action was called for.

1. What is the difference between a trend chart and a histogram?

A histogram is an aggregate of the data with no sense of time or sequence. A trend chart is your data plotted over time so you can visualize any changes in your process.

2. What kinds of trends can I see in a trend chart?

Some of the common trends are: points sequentially going up or down, cycles, sawtooth up and down, sequential data above or below a center line or outliers.

3. Can I use a trend chart for forecasting?

Yes. There are many time series trend charts which allow you to project your data forward to predict and forecast beyond your existing data.