The term Z bench is a measure of process capability for continuous data. Before defining it, we will discuss the term Z score and then explain Z bench and its variations. Benefits and best practices will be presented along with an example of how to apply the concept of Z bench.

Overview: What is Z bench?

Before we go into an explanation of Z bench, you should first understand what is meant by the letter Z. Assuming a standard normal distribution, Z or Z score is the number of standard deviations a value of interest would be from the mean.

The formula for calculating Z score is:

This graph represents the probabilities associated with the standard normal distribution and the standard deviations, or Z values. 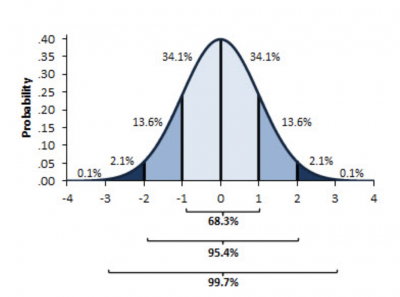 For example, let’s say your turnaround time is 190 minutes. Historically, turnaround time has a mean of 150 minutes and a standard deviation of 25 minutes. Assuming a normal distribution, your Z score would be:

The Z score is very useful because it can convert any continuous measurement into a generic measure, allowing comparisons between different processes.

Z bench can be used as a measure of process capability and a substitute for Cp and Pp. Here are the various Z bench calculations you can do.

The table below provides a comparison of Z bench to other measures of process capability. 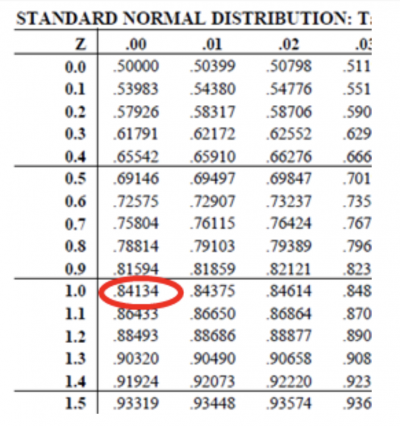 Finally, let’s have a brief discussion of Z shift. This is a controversial topic where Z shift is defined as the difference between the long-term and short-term Z bench. Some practitioners, based on the work of Dr. Mikel Harry, assume this to be 1.5 standard deviations. There has been much debate on this topic, though.

Z bench has a number of benefits as a generic surrogate measurement for process capability.

Z bench is a generic measurement that converts different continuous data values into the number of standard deviations.

You only need a simple subtraction and division to calculate Z bench.

Z bench serves as a tool for comparisons between disparate processes. If process A has a higher Z bench than process B, you can say it is meeting specifications better than B. It doesn’t matter whether we are talking about “apple” or “orange” processes. The comparison is a relative measure of capability.

Why is Z bench important to understand?

Process capability, in any form, helps you determine whether your process is capable of meeting your customer’s specs, expectations, targets, goals, or any other measure of performance.

The calculations for short- and long-term Z bench are different. Knowing the difference in the standard deviations you will be using is important for the proper calculations.

What your customers care about

The customer will be more interested in your ability to meet their specs in the long term. Short-term variation may be harder to control, so in the long run, you need to maintain your process consistency and capability.

Comparing different parts of your organization as a function of Z bench is an easy way to see who is meeting specific process specs and who isn’t.

The incoming quality control manager was concerned about the current level of quality from one of its suppliers. Manufacturing had been complaining that the quality seemed to be slipping. Data was collected, and a process capability study was performed using the current specifications of 602 for the upper and 598 for the lower, with the expected mean to be 600.

A popular statistical software package was used for the analysis shown below. You see the different Z bench and process capability calculations. This output is easy to interpret. Notice there appears to be a considerable amount of product beyond both the upper and lower specs. The Cpk (0.64) and Ppk (0.56) are less than one and far less than the company expectation of 1.67.

There appears to be more of an issue with violating the upper spec than the lower spec, as shown by the upper and lower Z bench values and the parts per million (PPM). A Z shift seems to exist as defined by the difference between Z bench short and long term.

The bottom line is that manufacturing was correct: This supplier was doing a poor job in meeting the company’s specs. A meeting was set up with the supplier to go over the results of the study and to find solutions to immediately rectify the situation. 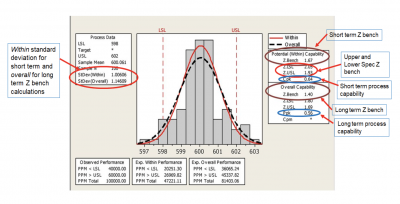 Keep these few tips in mind when calculating and using Z bench to measure your process capability.

1. Use actual Z shift, not necessarily the common 1.5 sigma shift

The original 1.5 sigma shift was an empirical calculation based on the experiences of Dr. Mikel Harry and Richard Shroeder. If you want to use sigma shift in your organization, use your actual long- and short-term values for Z bench.

A large difference in long- and short-term Z bench is interpreted as shifting and drifting of your process mean. This signifies an opportunity for process stabilization.

The concept of Z can be a bit esoteric for many managers. It is suggested that you convert the Z bench numbers to DPMO or a similar measure for easier understanding.

1. What does it mean when Z bench is a negative number?

It means your process mean is beyond either your upper or lower specification limit, resulting in more than 50% of your output being out of spec.

2. Can Z bench be used for discrete data?

No, because the calculation of Z bench is based upon the standard normal distribution, which is for continuous data.

3. Are short- and long-term Z bench calculated the same way?

Catching up on your Zs

Z is a measure of the number of standard deviations a value is away from the process mean. It is based on the standard normal distribution. There are a variety of Z bench calculations you can use to represent the Z value for just your upper spec, your lower spec, short term or long term. Z bench can be used as another measure of process capability by substituting for Cp and Pp. Finally, it can be converted to DPMO (or similar value), which may be easier to understand.