Have you ever been on an improvement team that just doesn’t work as well as you expected? Was it because people weren’t trying or was the mix of personalities and perspectives not conducive to working together for a solution? Let’s see how one company handled this problem.

The core of Lean Six Sigma is the use of employee teams to analyze and make recommendations for improving organizational processes. Usually, the selection of team members is based on someone being a subject matter expert (SME) on the problem or issue being addressed. Other times, it is a function of who is available when the team is formed.

Unfortunately, this large consumer products company concluded that many of their teams did not perform as effectively or efficiently as they expected given the technical skills of many team members. As a result, the length of time teams took to complete their projects (greater than 6 months) and the quality of their outcomes was less than desirable.

The company’s newly hired MBB, Sara, had previously used Dr. Edward de Bono’s Six Thinking Hats as a way to analyze team members’ thinking processes and select people who would be compatible. De Bono, a Maltese physician, psychologist, and philosopher, introduced the concept of the Six Thinking Hats in his 1985 book of the same name.

The underlying concept of the Six Thinking Hats is that the human brain thinks in several distinct ways which can be challenged and used in a structured way allowing a person to develop tactics for thinking about particular issues. De Bono identified six distinct directions in which the brain can be challenged. In each of these directions the brain will identify and bring into conscious thought certain aspects of issues being considered.

The Six Thinking Hats technique forces you to look at a problem in six different ways. It takes you and your team beyond any of your instinctive positions, so that you explore a range of different perspectives. That way, you can carefully consider each one, without having to argue your case or make snap decisions about whether your decision is right or wrong.

Colored hats are used as metaphors for each direction. Switching to a direction can occur by simply putting on one of the six colored hats, either literally or metaphorically. Each color represents a thinking approach. Most people tend to exhibit one type more often than the others. A person may also use multiple thinking processes although to a lesser extent. The graphic below summarizes the colors and characteristics of each hat. 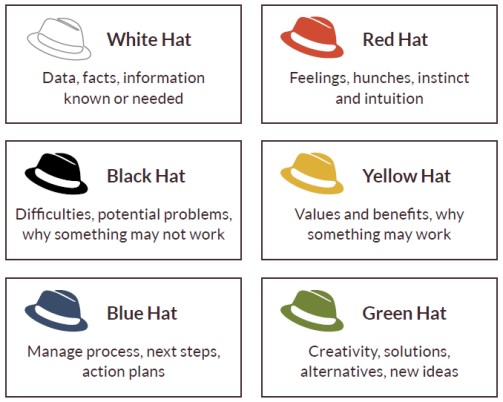 Here’s what each of the Six Thinking Hats represents:

Blue Hat – When you or your team are wearing the blue hat, your focus is on controlling your thinking and managing the decision-making process. You will have an agenda, ask for summaries, and reach conclusions.

The blue hat plays a critical role in the process. It is used to:

Using the blue hat to open a meeting:

Using the blue hat to close a meeting:

Green Hat – The green hat represents creative thinking. When you’re wearing this hat, you explore a range of ideas and possible ways to improve the process.

Red Hat – This hat represents feelings, intuition, and instincts. When you’re engaged in this type of thinking, you can express your feelings without having to justify them with logic or facts.

Yellow Hat – With yellow hat thinking, you look at issues in the most positive light possible. You accentuate the benefits and the added value that could come from your ideas. Here you are Sally and Sam Sunshine.

Black Hat – This hat is about being cautious and assessing risks. You employ critical judgment and explain exactly why you have concerns. You can be perceived as Debbie or Donnie Downer but this role is critical but should not be overused.

White Hat – The white hat represents information gathering. Think about the knowledge and insights that you’ve collected already – but also the information you’re missing, and where you can go to get it. Let the data and facts speak.

Some colors have cultural implications, so you may have to pick new colors for one or more of your hats. For example, in China a green hat can mean an unfaithful spouse. You might decide to change the black hat to gray, so as not to associate black with fault finding or racial connotation. You can use any colors that are appropriate for you and your team if all six are different, and you stick with the same colors each time you use this technique.

Sara chose to use t-shirts rather than hats since it was difficult and expensive to find a large quantity of compatible hats of the standard six colors. Sara ordered enough shirts and shipped them to the various sites to use for the myriad of teams each formed.

Here are some general recommendations for using the hats:

Having identified the six modes of thinking you can use specific sequences of hats which encompass and structure the thinking process toward a specific goal.

Sequences always begin and end with a blue hat; the group agrees together how they will think, then they do the thinking, then they evaluate the outcomes of that thinking and what they should do next. Sample sequences are shown below based on the purpose of the meeting. Each hat is typically used for approximately minutes at a time, although you might use an extended white hat to start the process.

Sara had to train people how to use the process

Given the number of meetings which could utilize the Six Thinking Hats process, Sara did not have the personal bandwidth to facilitate all of them. Therefore, Sara used a Train the Trainer process whereby she trained the site Black Belts (BB) and then co-facilitated two sessions with each one. Periodically she would drop in and observe a BB doing a session and provide any relevant feedback to improve their delivery.

Here are a few hints of what to do if you decide to use the Six Thinking Hats to improve the outcomes of your meetings:

Since no one on the team naturally uses all the Thinking Hats, they will need to role play the ones they don’t typically employ in meetings. Encourage them to have fun and act out the assigned role as best they can.

2. Clearly define the characteristics and thinking process for each Hat

During a meeting, team members will be asked to assume different colored hats or t-shirts. Be sure they are clear on the type of questions, actions, and behaviors they need to exhibit when wearing a specific color.

3. Avoid being critical of anyone’s portrayal of a specific Hat color

Don’t let the Black Hat overdo his or her role since it is intended to bring out the negatives of the process. Don’t downplay the role of the Yellow, Green and Red hats since they are usually more subjective and softer than the other colors.

In addition to more efficient, effective, and productive meetings, the company was able to reduce the average completion time for a project from greater than six months to an average of 3.2 months. This allowed for quicker implementation of the projects and a faster accrual of benefits.