In His 100th Year, Juran Still an Advocate for Quality

The man whose ideas led to corporations adopting Six Sigma and other quality management strategies warns that U.S. companies are moving too slowly in improving the quality of business procedures, products and services. The nation’s position in the world economy is at risk, according to Dr. Joseph M. Juran.

Juran, dean of quality professionals worldwide, told an audience which had come to Stamford, Connecticut (USA) to mark his 100th year and the Juran Institute’s 25th anniversary: “The U.S. improvement of quality has been evolutionary, not revolutionary. We have exported jobs and lost entire industries. If these standards continue, there will be a severe risk that the U.S. will lose its status as an economic superpower.”

Pressing the issue of quality as he has for decades, Juran made his remarks at a luncheon in his honor. Family, friends and numerous business executives who have benefited from his advice celebrated his 100th birthday, which actually comes on Dec. 24. They also recognized the institute he established in 1979 to address quality management issues. The institute is located in Wilton, Connecticut (USA). 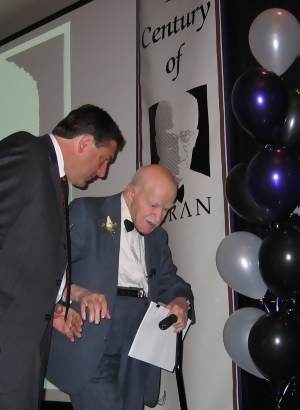 Joseph Juran heads for center stage to address a gathering of family, friends and admirers who were on hand for the celebration of his centennial. With him is Joseph DeFeo, president and CEO of the Juran Institute.

Chief executives should personally become leaders of their companies’ quality control efforts, Juran said. He credited Motorola for starting its own quality control university in the 1980s and blazing the trail in the Six Sigma management strategy.

Japanese industrialists established quality measures as a business priority in the 1950s and 1960s. Leaders among those Japanese industrialists have given great credit to Juran for advice he first gave them in 1954 during a presentation he made in Japan. Although Juran was the one who delivered the message, along with another American management icon, W. Edwards Deming, it is the Japanese who deserve the credit for incorporating the ideas into their manufacturing and quality control processes, Juran said.

“They knew they needed help. They listened, and they translated my books into Japanese. I gave lectures like that in a lot of countries, but they took it a lot further,” Juran said. The result was a nation that incorporated quality management into nearly every facet of business, distancing Japan from the rest of the world, he said.

“The United States is not the world leader in quality. The leader is Japan. Before World War II it was the exporter of shoddy goods,” Juran told the audience. “They tried to gain power through trade. Their executives knew they had to improve their quality. The rest is history.”

Juran’s message about quality management resonated among top executives at those Japanese businesses, according to Noriaku Kano, engineering professor in the Department of Industrial Management and Engineering at Tokyo University of Science. Kano, a well-known name in quality management himself, traveled from Tokyo for the Juran celebration.

“It was important to the development of Japan,” said Kano, who was a graduate student in Japan when he first met Juran in 1966. In fact, Juran developed such a reputation among Japanese industrialists that he was decorated by the emperor, said Kano, one of a series of speakers who had stories to tell about their dealings with Juran and his institute, which specializes in working with corporations and non-profits on quality management issues.

Curt Reimann, former director of the Malcolm Baldridge National Quality Award and retired director for quality programs at the National Institute of Standards and Technology, recalled Juran’s testimony before Congress about Japan’s emphasis on quality as its way to compete in the world economy. “I think there was a great deal of hand wringing, but there needed to be action,” Reimann said. Hence the Baldridge competition was started in 1986, with the assistance of Juran as a member of the award’s board of overseers.

A. Blanton Godfrey, a former chief executive officer of the Juran Institute and dean of the School of Textiles at North Carolina State University, contended that U.S. companies made a crucial error by not adopting Juran’s philosophies in the 1950s when the Japanese saw the benefits. “It was productivity in the 1950s and not quality. The objective wasn’t making it good. It was making it fast,” Godfrey said. “The Japanese listened and became exporters.”

“I had no idea in 1924 that the subject of managing for quality would, during my lifetime, expand in importance, become a growth industry, and undergo a wrenching world revolution. Yet it did.”

One of Juran’s pupils, Enrique Maso, traveled to the celebration from Barcelona, Spain, to thank Juran for his tutelage. Maso recalled a day in 1949 when he spent five hours in Washington Square in New York City, discussing business management with Juran, who at the time was an instructor at New York University. “I owe everything to Professor Juran,” said Maso, who became a major player in several Spanish industries and served as the mayor of Barcelona.

Lennart Sandholm of Sweden-based Sandholm Associates told the audience that he already was familiar with Juran’s strategies when he met Juran in 1965 while a quality control manager at Electrolux in Sweden. He tried to attend Juran’s seminars whenever one was being held in Sweden. In all, Juran made 31 visits to Sweden. “The visits that you made laid a foundation for a long friendship,” Sandholm told Juran, adding that he has been an inspiration to Swedish companies. “You are the person outside of my family that has had the greatest influence on my life,” Sandholm said.

David Hutchins, a principal in David Hutchins International Limited, came to the celebration from the United Kingdom. He recalled that Juran was speaking to him and others in London the day Indira Ghandi was assassinated in October 1984. Even though a noisy crowd assembled in the street outside the building, Juran kept his commitment, speaking over the tumult.

Juran’s ideas have been adopted by many major corporations in the U.S., Japan, Spain, Sweden, the United Kingdom and Canada, according to Joseph DeFeo, the current president and CEO of the Juran Institute. DeFeo met Juran in 1985 when he was a manager at Perkin Elmer. “The values he taught us saved that company for about 20 years,” said DeFeo, who helped organize the fete for Juran. Under DeFeo’s leadership, the institute carries on Juran’s legacy by helping organizations around the world improve their business management techniques.

Juran, who now lives in Rye, New York (USA) with Sadie, his wife of 77 years, immigrated to Minneapolis, Minnesota (USA), before World War I with his mother and five siblings from a small town in the former Austro-Hungarian Empire. His father had preceded the family to the United States three years earlier. 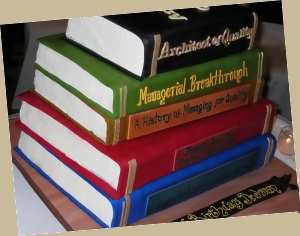 Snapshot of Dr. Juran's 100th birthday cake in the shape of a stack of the books he has authored.

A display outside the meeting room provided guests with an in-depth look at Juran’s life, including a copy of his birth certificate, photographs of the Romanian village where he was born and the modest house where he lived with his family in Minnesota. A portrait taken at the time of Juran’s graduation from East High School in Minneapolis in 1917 revealed a handsome young man with an eager look, ready to contribute to his adopted homeland.

Like many of that era, Juran worked at a variety of jobs, including laborer, shoe salesman, bootblack, grocery clerk and bookkeeper. But unlike most of his peers, he decided to seek a college degree and in 1920 enrolled at the University of Minnesota. He graduated with a degree in electrical engineering and later earned a law degree. Years later, he showed his appreciation to the university by funding what became the Juran Center for Quality Improvement. The university has established a fellowship in his honor, focused on promoting quality in business.

Juran’s career has included a stint as head of industrial engineering at Western Electric in the late 1930s, serving as a lend-lease assistant administrator during World War II and later his dedication to consulting on quality management. In 1937, with his conceptualization of the Pareto Principle, Juran became a source for those in business management.

Juran’s Quality Handbook, which he wrote in 1951, is now in its fifth printing. His book, Managerial Breakthrough, first published in 1964, presented a more general theory of quality management, which evolved into Six Sigma – a quality management process adopted by Motorola, General Electric and now many other corporations. Many of the 200 celebrants at the luncheon carried Juran’s most recent book, Architect of Quality, his autobiography which was published by McGraw-Hill last year.

Juran continues to write about issues and fundamentals in managing for quality, and is planning another book.

After he established the Juran Institute at age 74, one of the first projects was development of a video series on quality improvement that was distributed to companies around the world. “Probably a million people listened to those tapes,” Juran said. He finally relinquished the role of leading the institute in 1987, allowing him time to continue lecturing.

Juran Comes From a Family of Achievers

Speaking concisely in a clear tone that belied his age, Juran informed the luncheon audience that he comes from a family of achievers. He introduced his son, Charles, who made a career in agricultural real estate; his daughter, Sylvia, who earned a doctorate in Russian literature; and a cadre of grand children and great-grandchildren who are involved in a variety of professions or are in college.

For Charles Juran, 73, the day was one of celebration and one of memories. “I was brought up to believe in the American dream,” he said. “I saw it materialize in our family.” He noted that his Uncle Nathan became an Oscar-winning film director, his Aunt Minerva earned a doctoral degree and had a career in education, and his Uncle Rudy founded a municipal bond company. “All of that talent out of that little shack,” he mused.

“It was a hard life for my father as a child. There was little difference between the poverty in Minneapolis and in Romania. This is not a personal story of achievement,” he said. “It’s an American story.”