The process improvement tool 5S (sort, straighten, shine, standardize, sustain) sounds like a simple concept to implement – and it is. But its simplicity is sometimes the cause of its early demise – it is easy to “do” 5S without much effort or strategic coordination, and thus without as much effect as possible. 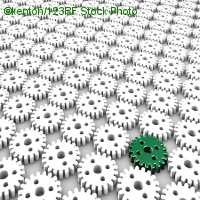 Whether department-specific or corporate-wide, the 5S initiative that is most likely to lead to the best results is the one that follows the integrated-with-the-process model of implementation. Here, the 5S elements are embedded within day-to-day operational processes. This model can be contrasted with a stand-alone model, in which 5S is executed independently of processes. Table 1 compares the integrated-with-the-process model to the stand-alone model.

Why Use the 5S Integrated–with-the-process Model?

Both 5S models shown in Table 1 have the same intent – deploying 5S – but the examples reveal that the integrated-with-the model process may be more effective as it provides timely feedback, visible accountability and the opportunity for immediate mitigation. The integration of the 5S elements into the core processes promotes the dynamic interaction of the 5S elements within the system that would likely increase its sustainability; the 5S stand-alone model may require more maneuvering by team members to ensure the dynamic relationship with the processes.

With the integrated-with-the process model, a 5S initiative is exposed to the same critical-to-quality requirements that the operational processes are, including customer requirements, operational costs, risk, etc. Therefore, this model has more opportunities for aligning 5S activities with business priorities and added value in comparison to the stand-alone model.

Table 2 further illustrates the benefits of the 5S integrated-with-the-process model in comparison to the stand-alone model.

Do’s for a Successful 5S Initiative

Prioritize areas of implementation based on risk assessment and cost list only the tasks that can be realistically achieved. For example, it may add more value to prioritize 5S implementation in critical areas (such as dock operations for a logistic company) rather than areas with lesser variability (such as the administrative offices).

5S initiative designers may not necessarily be part of the larger process improvement deployment team especially for bigger organizations. Therefore, deployment-level process improvement leaders would be well served to set up a periodic follow-up mechanism with the 5S process owners to identify any major process changes that may require adjustment or re-designing of the 5S deployment model. Metrics may send signals that items need to be adjusted; for example, constant failure may mean that expectations are exceeding capability.

An escalation path for addressing the continuing effectiveness of the 5S intent needs to be part of the design of the initiative. The escalation path may be as simple as reviewing a monthly trending of results versus goals with process managers.

More Than a Checklist

Claiming to have a 5S program is not as simple as having a 5S checklist. 5S is more than a form or a procedure – it is a discipline that needs to be understood, embraced, implemented and continually measured by the workforce for the program to be effective and add value. If used properly, this is a powerful improvement tool that is simple and inexpensive.