Definition of Analysis of Variance (ANOVA):

Overview: What is ANOVA?

ANOVA was developed in 1918 by the famed statistician Sir Ronald Fisher. Previously, it was suggested you use a 2-sample t test for two groups. But what if we had 3 or more groups? For 3 samples, A, B and C, you could compare A to B, A to C and B to C, using a series of 2-sample t tests and an alpha risk of 0.05 for each comparison.

With three groups and an alpha of .05 the resulting alpha would be

You can see that your original alpha risk of 0.05 has increased to 0.143. What if there was a test in which there was only one comparison, but it was designed so it could handle 3 (or more) samples?

ANOVA is based on the F ratio which allows you to compare the denominator to the numerator as a single comparison. The denominator is calculated to establish the amount of variation you would normally expect. It becomes a sort of standard of variability against which you check all others. The numerator is the others that are being checked. It is also referred to as the Signal/Noise ratio. You are looking for a Signal that the group means are different.  Noise will mask the ability to do that.

When the F ratio value is small (close to 1), the value of the numerator is close to the value of the denominator and we cannot reject the null hypothesis that there is no difference between the population means from which the data came from.

Now for the actual formula and calculations:

There are a number of underlying assumptions about ANOVA which you must confirm. Here are the primary assumptions:

ANOVA is powerful and efficient with the following benefits:

The computations for an ANOVA of three or more groups is considerably less than if you attempt to do multiple t test comparisons.

2. Uses the concept of variation to test means

By using within and between variation for your groups you are able to transform the variation information into a comparison of means.

3. Can be used for any number of groups

ANOVA can be used for comparing the means of three or more groups versus just two groups for a 2-sample t test.

Why is ANOVA important to understand?

There are a number of concepts in ANOVA you will want to understand to use it properly.

Even though you are testing for differences in means, ANOVA uses a ratio of variation (within and between) to draw conclusions about the difference in group means.

Limitations of the assumptions

As in all statistical tools, you must comply with the underlying assumptions of the tool to have confidence in your results and conclusions. Normality and equal variances of each group are important assumptions to be met.

Can be used for one or two response variables

An industry example of ANOVA

A Product Manager was trying to develop a better process for signing up customers for equipment placement in retail stores. Most of his issues revolved around getting customers approved for new equipment. The Master Black Belt ,assigned to his division, suggested he use ANOVA to investigate whether there were any statistically significant differences between his three distribution channels.

His first task was to confirm his data met the assumptions of normality and equal variance. Below is his computer output. Note the p-values are higher than 0.05 indicating the data in his three groups are not different than normal. Likewise the three groups had approximately the same variances. 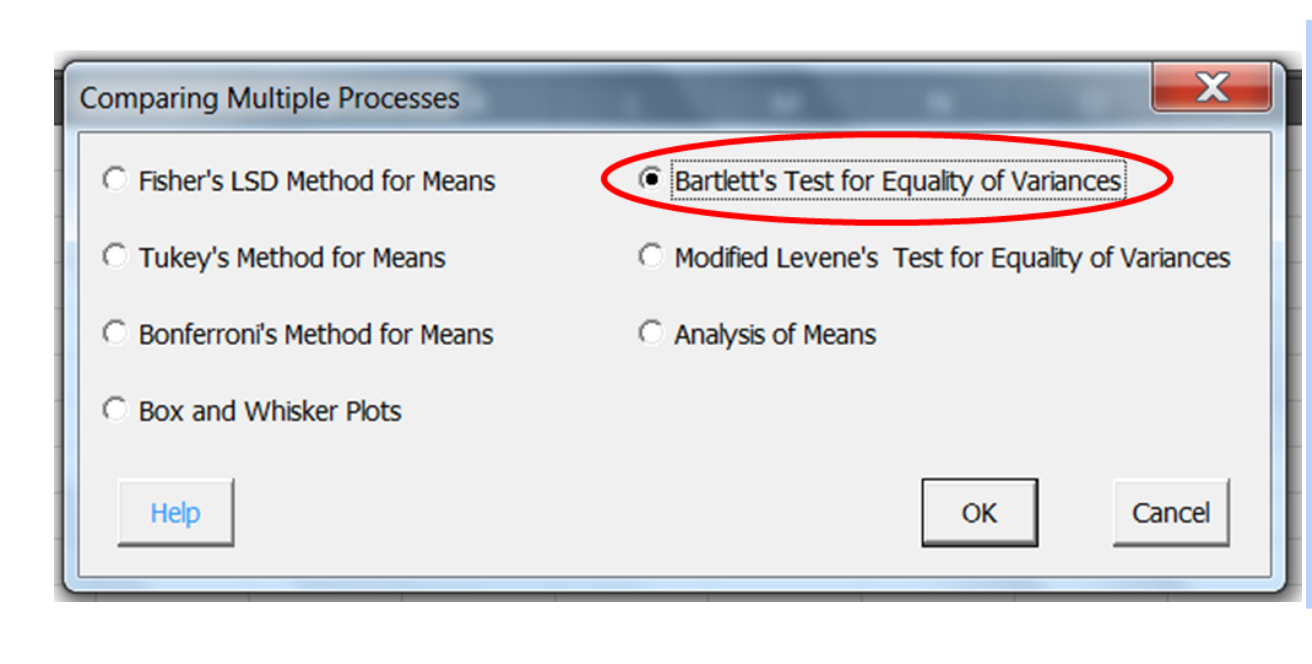 The ANOVA table, based on the low p-value indicates there is a difference between the three groups.

The Product Manager identified which group had the fastest signup times, found out what they were doing and shared the best practices with the other groups. After one month, all three groups were signing up customers faster than before.

3 best practices when thinking about ANOVA

Here are a few hints to help you efficiently utilize ANOVA.

It is recommended that you do a Measurement System Analysis (MSA) on your measurement system to have confidence that the data you are analyzing is accurate and valid.

You will need to confirm that you have met the assumptions for using ANOVA otherwise your results and conclusions may be incorrect.

Your selection of an appropriate alpha risk will impact the power of your ANOVA. Power is the ability to see a difference in your groups if one exists. You will want to maximize your power. As alpha goes up so does the power of your test.

1. What’s the difference between ANOVA and t-test?

The t test can be used for one or two sample groups. ANOVA should be used for three or more groups of data.

2. Can I use ANOVA if the variances of my data groups are not the same?

No. Equal variance is one of the underlying assumptions for using ANOVA. Unequal variances or outliers in the data will negatively affect the outcomes of the statistical analysis.

3. What are some of the assumptions for using ANOVA?