When trying to understand what factors or variables can affect your process outcomes, you seek to identify all your independent variables. You will use these independent or predictor variables (X) to help you understand how they interact and impact your dependent or response variable (Y). But sometimes you miss an X variable and don’t include it in your analysis. This lurking variable can distort your conclusions. Let’s learn some more about lurking variables.

Overview: What is a lurking variable?

But, do you really believe that increasing ice cream sales (X) causes the number of shark attacks (Y) to correspondingly go up? There could be correlation but is there causation? Possibly there is a lurking variable which you did not include in your data collection and analysis that would be more valuable in explaining the cause of shark attacks.

Does the weather sound like it might be a lurking variable? Would warm weather bring more people to the beach making for more potential targets for the sharks? 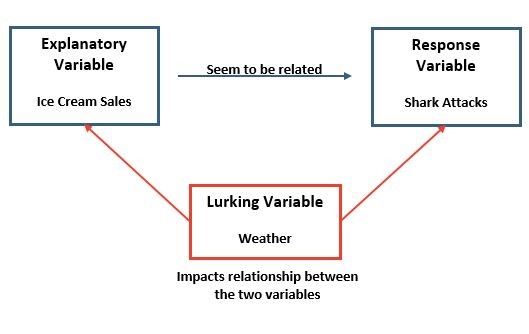 An industry example of a lurking variable

The fleet manager was interested in predicting fuel economy for his fleet of trucks. He designed an experiment to study the impact of speed, tire pressure and fuel octane on the truck’s miles per gallon efficiency.

His experimental design had all his test runs for the low tire pressure settings being done in the morning. The high tire pressure runs were done in the afternoon. Fortunately, his Six Sigma Black Belt (BB) pointed out that there could be a lurking variable which could distort the study conclusions.

What is a simple way to offset a lurking variable if I do a designed experiment?

What happens if I don’t account for a lurking variable in my analysis?

Is there a statistical test which can tell me whether I have a lurking variable?