Overview: What is a normality test? 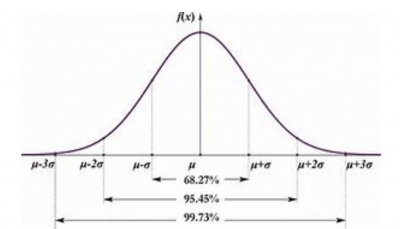 Now that you understand what a normal distribution is and why you need to do a normality test, let’s look at some of the more common tests.

The simplest way you can test for normality is to do a normal probability plot. The plots below are the output of a popular statistical software. You would interpret this graph by looking at the line and the confidence interval. 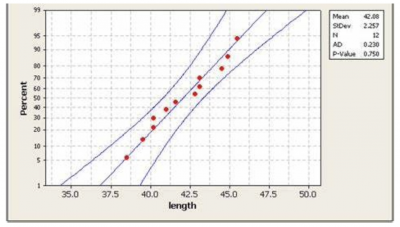 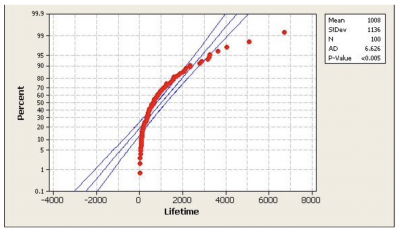 There are a number of statistical tests you can use. Two of the most popular are the Anderson-Darling Test and the Kolmogorov-Smirnov Test. The null and alternate hypotheses are the same as described above.

The test statistic for the Anderson-Darling test is:

The test statistic for the Kolmogorov-Smirnov test is: 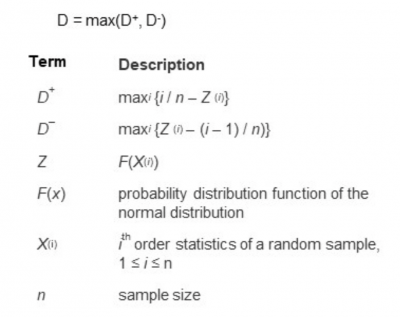 In both cases, the output you get will include a p-value. Assuming that you selected your alpha value to be 0.05, you will reject the null if the p-value is less than 0.05. That allows you to claim that your data is statistically different from a normal distribution. On the other hand, if your p-value is higher than 0.05, you can state that your data is not statistically different from a normal distribution.

3 benefits of a normality test

Knowing the underlying distribution of your data is important so you can apply the most appropriate statistical tools for your analysis.

A normality test will help you determine whether your data is not normal rather than tell you whether it is normal.

By properly reacting to the p-value, you’ll know whether you’ve complied with the underlying assumption of your statistical tool and whether you can proceed with your analysis.

Many times, you can use a graphical tool such as a histogram or probability plot to visually determine if the data looks like it might be normal.

While it’s only a rough approximation, if you see a bell-shaped, symmetrical picture on a histogram, it might be sufficient. If the probability plot looks straight and is within the lines of the confidence interval, you might be OK in assuming the data is not different than normal — especially if the statistical test you’re using is robust to the assumption of normality.

Why is the normality test important to understand?

Different statistical tools for analysis have different assumptions regarding the underlying distribution of the data that you are analyzing.

You need to understand what these assumptions are regarding your data.

What is your hypothesis test?

Acknowledge the impact of sample size

As the sample size of your data increases, your chances of discovering non-normality increases. Small sample sizes may give you a false reading of normality.

The p-value of your normality test will indicate, with your desired level of risk, whether you can reject your null hypothesis. It is important that you know what that means so the next action you take is appropriate.

An industry example of using the normality test

One of the most common statistical analyses used in a business environment is linear regression. This tool allows you to determine the relationship between an X or input variable and a Y or output variable. A typical question you might ask would be, “Is there a relationship between run speed and temperature on your manufacturing line?”

A manufacturing engineer gathered data and, using a common statistical package, did the calculations for the linear regression. He was very pleased when the results showed that the r-squared value was 0.86. This means 86% of the variation of the Y, or output variable, can be explained by the relationship with the X, or input variable. That is a very strong relationship.

Fortunately, the LSS Black Belt assigned to manufacturing reviewed the analysis before the engineer communicated it to his manager. One of the assumptions of linear regression is that the residuals are normally distributed. When asked, the engineer admitted that he had failed to check that. When he did, he found that the residuals were actually very different from normal. This is often a result of some questionable data or data collection method.

This was his probability plot: 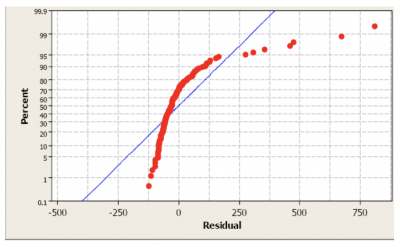 3 best practices when thinking about a normality test

It’s unlikely that you’ll do the hand calculations for a normality test. The important issue will be how you collect the data and interpret the results of your normality test. Here are a few thoughts to keep in mind.

Often, a simple plot of the data on either a histogram or probability plot will provide you enough insight into how your data looks. This will keep you from having to do more complicated analysis.

Random sampling of adequate size will increase the chance that your normality test will accurately reflect the true nature of the underlying distribution.

Your data may not be normal, so have a Plan B, or alternate analytical tool, that will still answer your statistical question but doesn’t have the same underlying assumptions of the data distribution.

1. Why should I do a normality test?

Many statistical analysis tools require that the data being analyzed be approximately normal. The normality test will allow you to determine whether your data meets that requirement.

2. What are the null and alternate hypotheses for the normality test?

Yes. The larger the sample size, the better you will be able to represent the distribution of your data. You may draw a false conclusion about the normality of your data if the sample size is too small. This may cause you to improperly use a statistical tool.

Wrapping up the normality test

Either using some simple graphical tools or more advanced statistical tools like the Anderson-Darling or Kolmogorov-Smirnov Tests, you will get a result that will suggest that you can reject the null, or you must fail to reject the null. From there, you can decide how to proceed.