Management sits around the conference table, reviewing the most recent quality data regarding expense report rejections.

“I don’t understand,” states the director of the finance department. “We held a process improvement event regarding the non-conformances last year. It was successful! When I looked at the overall occurrences year over year, they have decreased from 108 down to 70. Why do you seem concerned about the situation?”

You pull up the Paynter chart onto the conference room screen. It’s time to demonstrate to the director why assessing the situation is more complex than just looking at the overall numbers.

An overview: What is a Paynter chart?

A Paynter chart is a chart that combines characteristics of a pareto chart and a run chart. First introduced at Ford Motor Company, they are used when you want to compare multiple categories, most commonly over time.

They can can assist with showing how improvement efforts have reduced or eliminated issues over time or help show when a new root cause came into play that increased non-conformances within a specific sub-group.

It also helps give a more complete picture as to the state of a process, since it’s possible to have a situation where the overall numbers improve, but a category of non-conformances becomes more problematic over the same period of time. 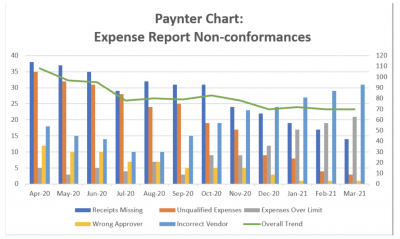 In the above example, a process improvement event addressing expense report non-conformances was held in April 2020. The major failure categories were then tracked for one year.

The good news is that the receipts missing, unqualified expenses, and wrong approver categories have been trending downward over the year, so we can assume that the efforts of the event were both successful and maintained. Perhaps more work needs to be done for receipts missing, but there are no signs that the issues are becoming worse. The other two categories are close to zero and looking great.

What’s interesting are the other two categories, which are both significantly trending up. Incorrect vendor occurrences started a downward trend but began to increase in September of 2020. This would imply that the event improvements were working, but that there was a change in September that led occurrences to rise. Was there a change in the process during this time? Did the system users stop performing the changes from the event? The trend requires more investigation to get to the root cause.

Expenses over limit was a low occurrence at the time of the event, and it stayed constant until October 2020, when it began to rise. By March 2020, it had gone from the lowest occurrences of the major categories up to the second largest. The improvements made during the event were unlikely to negatively impact expenses over limit, as the monthly quantities were stable for six months after the event.

So, if it wasn’t the event that led to the increases, what happened?

The Paynter Chart allows for a more detailed analysis of the situation. If management was only looking at overall occurrences, all signs would point to a great situation. With the Paynter chart, it becomes clear that the situation is not all good news. If the incorrect vendor and expenses over limit categories continue to be ignored, they are likely to continue their upward climb, and future overall occurrences will be larger.

3 benefits of using a Paynter chart

Paints a more complete picture when compared to an overall metric

Management often loves to use their KPI metrics (key performance indicators) when measuring the health of a system, but these overall metrics can be misleading. A Paynter chart helps give a more complete picture as to the health of a process and can help guide management into supporting the right process improvement initiatives.

Matching up the 80-20 rules over time

The Paynter chart allows us to see which categories are the major categories of concern, and how they change over time. Knowing whether your major offenders are a temporary blip over time or a monthly staple of the situation can help identify the level of priority when deciding which categories to address.

Demonstrates how categories change in reference to each other

The graph does a great job of showing how a category changes in reference to a different category. Did one group start to go up at the same time another group started to go down? Did both categories start to get worse at the same time? Are the root causes of each related?

The Paynter chart does a great job of giving suggestions as to where to look within a timeframe for a root cause.

Does a Paynter chart reveal the root cause of the issue?

You will need more tools to drill all the way down to the root cause of the issue or issues. The Paynter chart is a great tool for showing you the right places to look for the root cause, thereby saving you time and money during your investigation.

Does a Paynter chart have to contain an element of time?

While the Paynter chart typically has time as a metric, it does not have to use time. You can compare a different metric in its place, such as different products or different customers. The key is having the graph demonstrate how different sub-groups are performing in an effort to identify trends and possible root cause origins.

Should a Paynter chart replace a Pareto chart?

No, these charts have different purposes. A Pareto chart portrays a set of factors, shown in descending order, to help demonstrate the most significant factors. A Paynter chart takes multiple sub-group Pareto chart information and sets them up to be compared with one another.

Paynter charts do a wonderful job of comparing data across sub-groups, allowing you to identify trends and narrow in on the location of root causes. It’s especially great for showing comparisons between sub-groups over time and demonstrating whether continuous improvement initiatives have been successful over time.