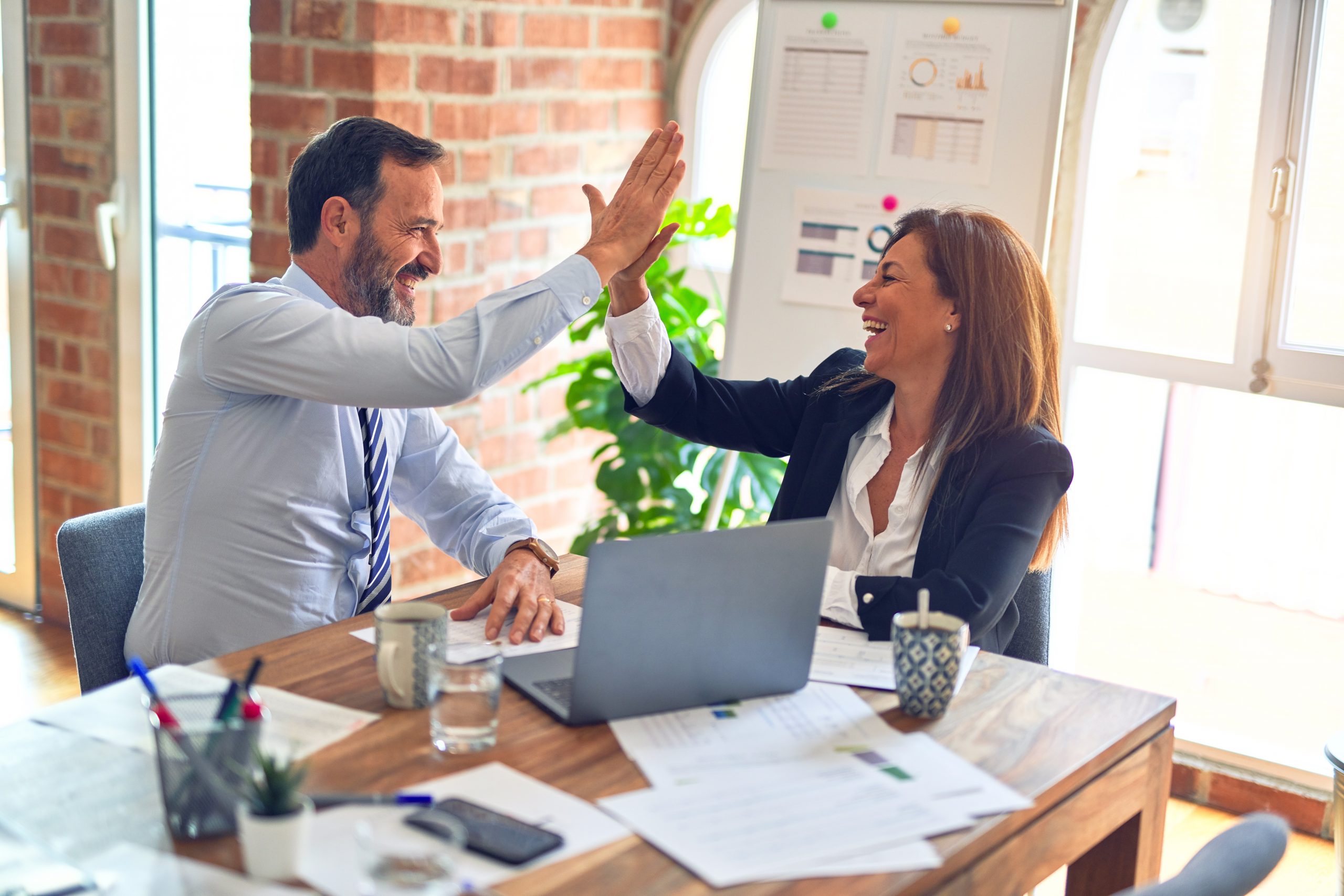 Using GOAL Deployment in support of their Strategic Plan, this company was able to align goals and objectives and achieve impressive organizational improvements

The Company historically used yearly Strategic Planning to lay out its macro goals and initiatives. This was done by each functional area of the company submitting what they believed they wanted to get accomplished during the following year. Unfortunately, since the process was done in isolation, many of the goals were misaligned and conflicted with each other.

Many organizations engage in this type of periodic strategic planning process where they identify and define key objectives. Gaps in actual business performance are identified and the organization is expected to determine how to close the gaps and achieve their goals. Unfortunately, a year goes by, and the organization fails to reach its goals.

The CEO decided it was time to revise the strategic planning process, so he introduced the concept of policy deployment

The CEO was concerned that the phrase policy deployment sounded too bureaucratic and esoteric. It was suggested the company use the phrase GOAL Deployment where GOAL stood for Greater Organizational ALignment. Policy Deployment is also referred to as Hoshin Kanri. He used the graphic below to illustrate the concept of GOAL Deployment: 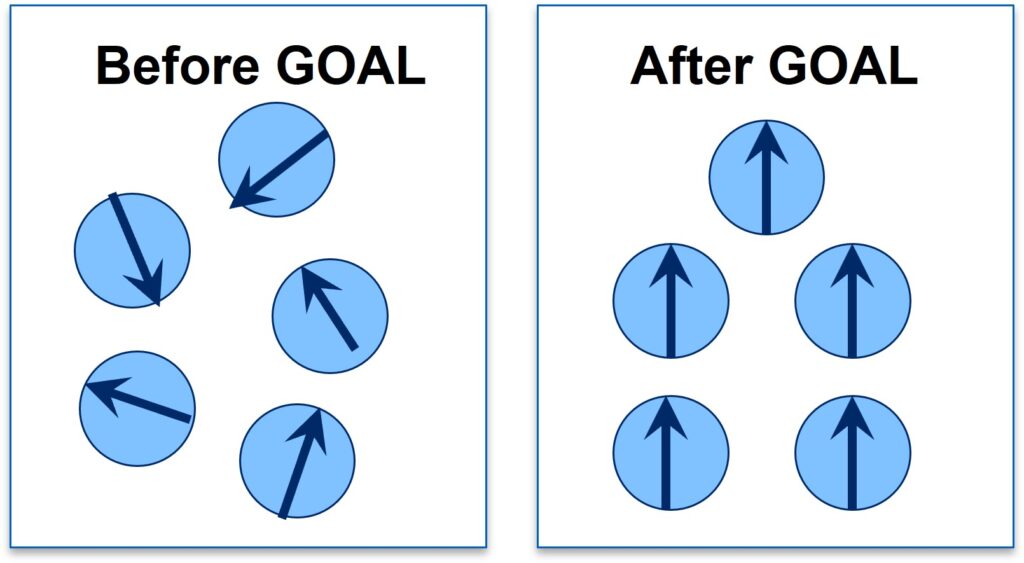 He assigned the training and execution support to the company’s Continuous Improvement group and their Master Black Belts (MBB). GOAL Deployment was integrated into the company’s deployment of Lean Six Sigma. The following graphic shows this integration. 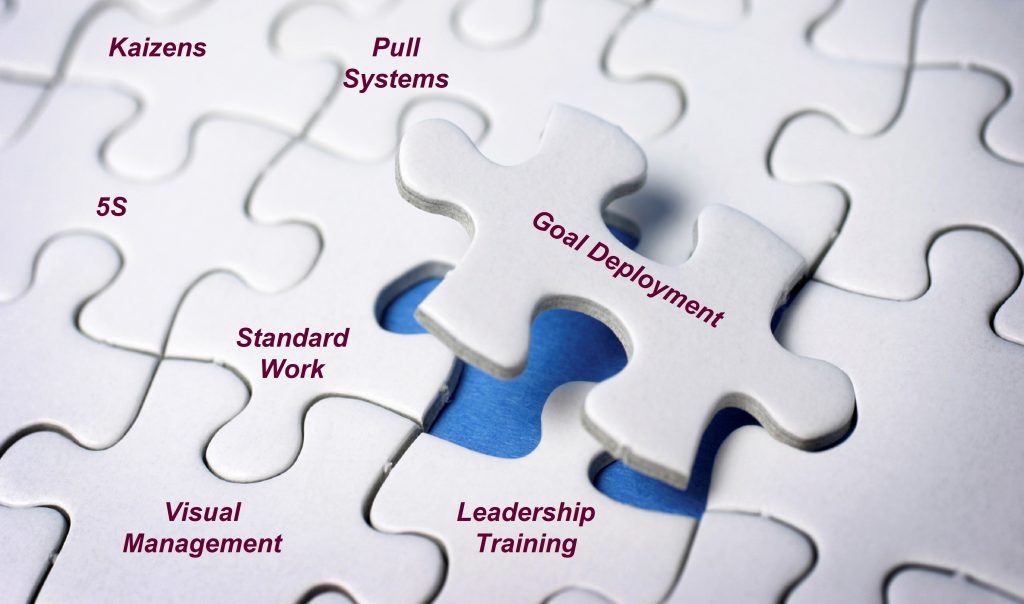 The GOAL Deployment process can be described in the following steps:

The steps of GOAL Deployment can be captured with the following graphic: 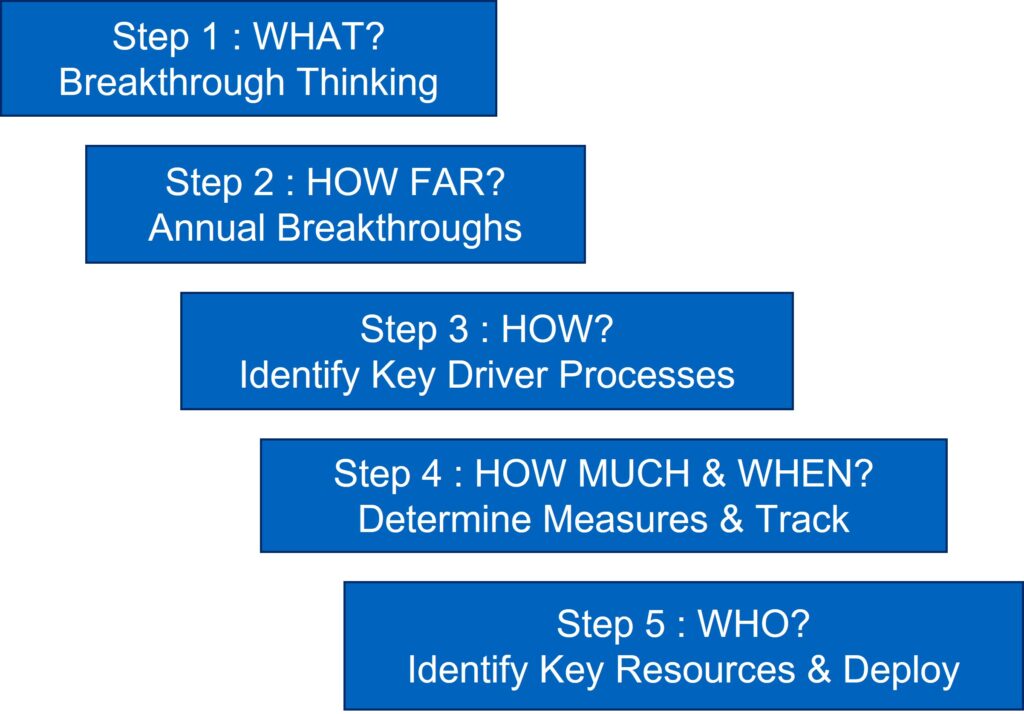 Here is a little more detail for each of the steps:

Step 1 – What is breakthrough thinking?

The training kicked off with the senior MBBs training the executive leadership of the company. They helped them identify the critical elements of GOAL Deployment and to construct the highest-level GOAL Matrix. Shown below, it is the one-page format which captures the five steps of GOAL. 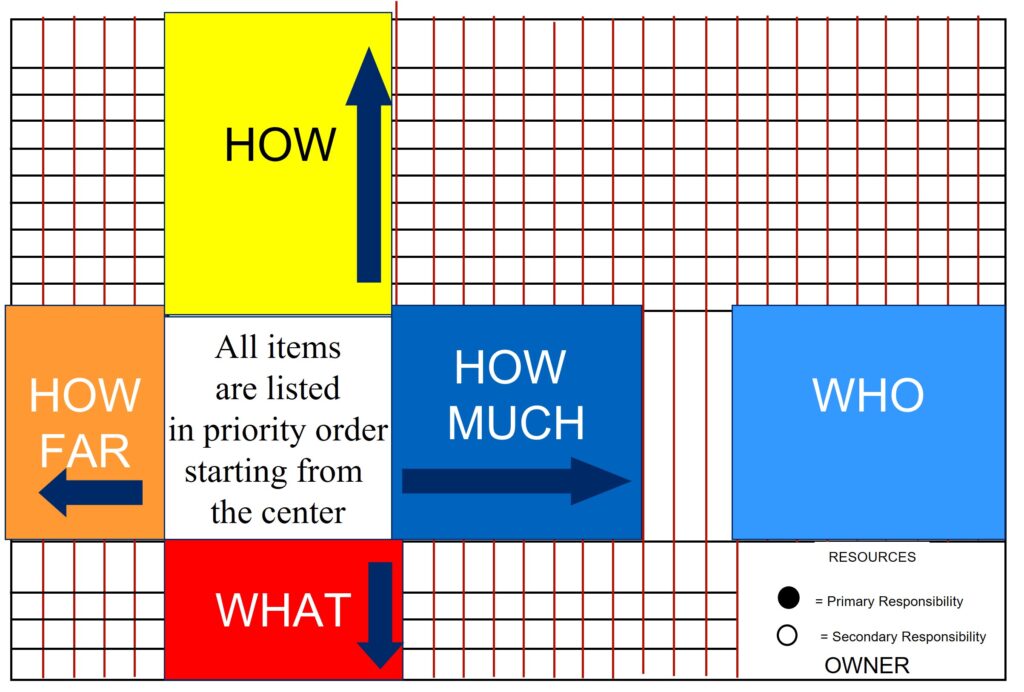 Here is the matrix with a little more detail: 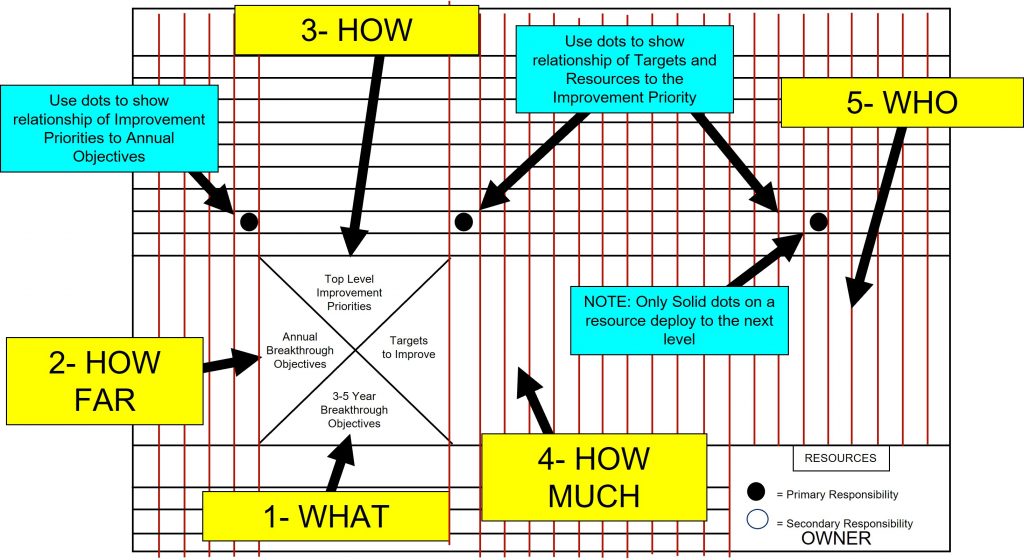 Once the senior leadership completed their GOAL Matrix, the next level of training was conducted using the top-level GOAL Matrix as a format for the creation of the next level GOAL Matrix. This process continued to cascade down the appropriate levels of management with the relevant manager doing team teaching with MBBs for their functional organization.

A completed first level GOAL Matrix would look like this: 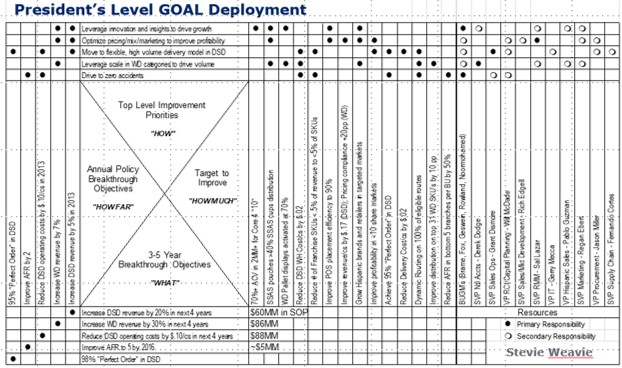 Lower-level GOAL matrices will flow from the high level one. 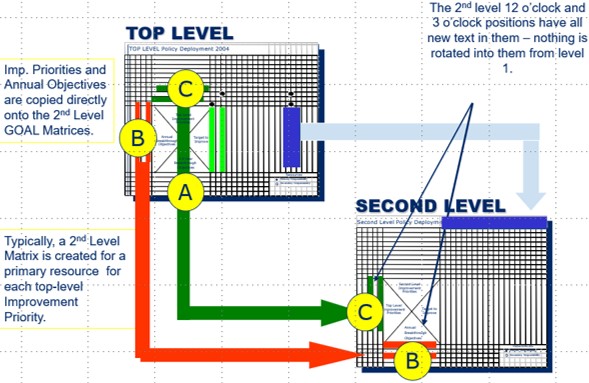 Eventually, the cascading GOAL matrices need to end with an action plan for improvement and achievement of the goals

The number of times the matrix cascades depends on the size and complexity of your organization. This company cascaded down to the functional manager level. That is where the root causes could best be identified and problem solving, and process improvement could occur. 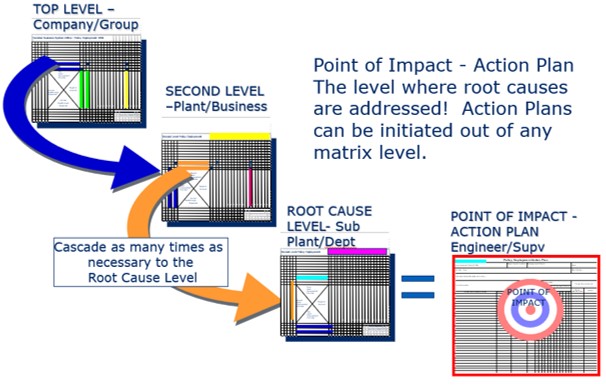 Simple colored bowling charts were developed for the critical measures in the GOAL Matrix. See an example below: 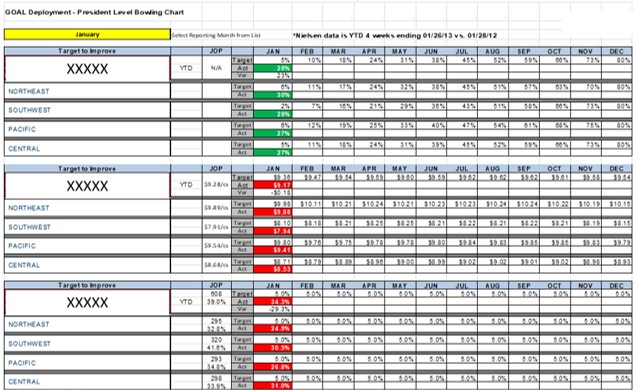 The basic improvement approach that the company took was the use of the PDCA Cycle. Other tools such as Kaizen events and DMAIC were also used. 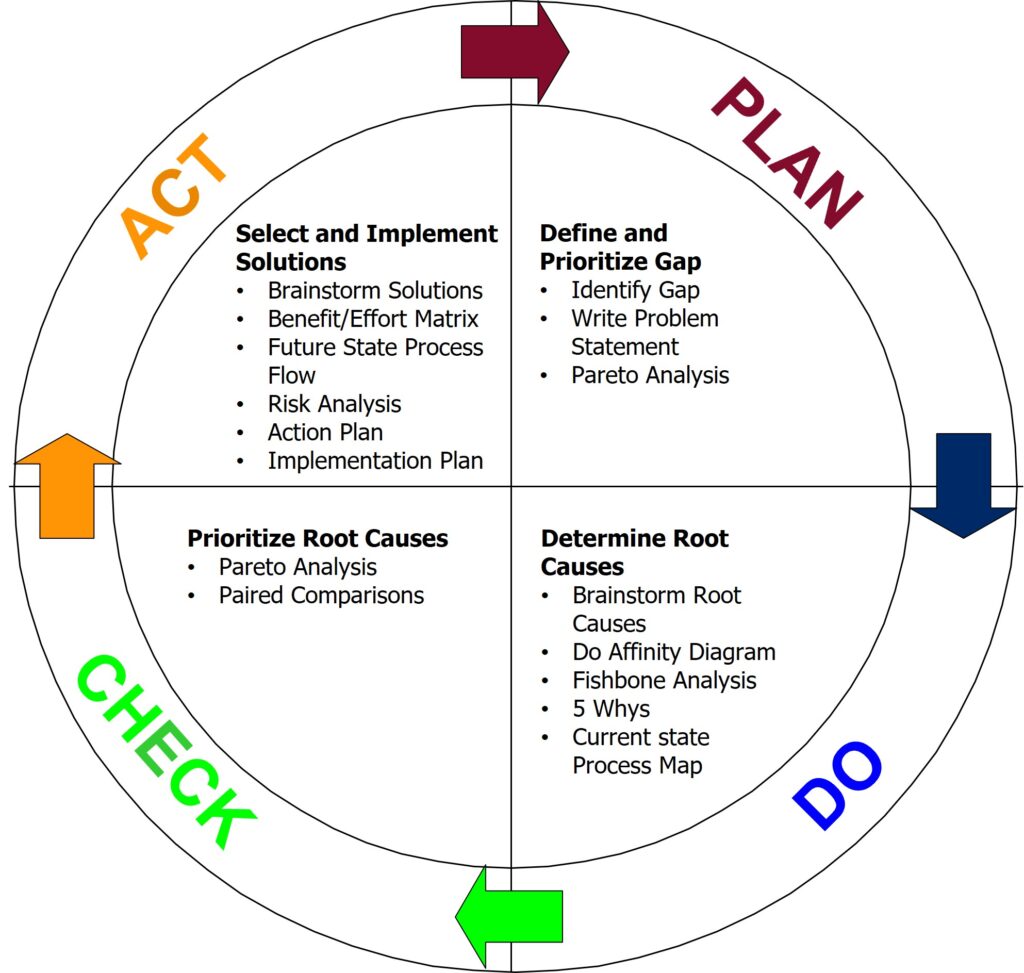 The purpose of GOAL Deployment is to:

After the strategic plan is deployed, goals are aligned, action plans are developed, and gaps are closed, it is critical that leadership stay engaged as to what is happening and to adjust as needed. New opportunities or threats may arise requiring additional goals or new action plans. Sometimes you will have to adjust timelines as unexpected situations arise. The GOAL Deployment Matrix, bowling charts and action plans are not one-off activities.

GOAL Deployment is one of the most critical things executive leadership does. It is how the organization determines where it wants to go and provides the map and tools to get there.