“Hey boss, how important is it that our specification limit be set to 27 and 13 for this process? I really would like to have the upper limit set to 24.”

“Well, we recently estimated the natural tolerance for the system to be 26 and 14. If we use 24 it would be below our upper control limit.”

“That’s fine, but unless we can upgrade the process to meet your needs, we are going to have a lot of failures when we go to production. Failures that will cost quite a bit of money. We need to keep our specification limits outside of the natural tolerance.”

An overview: What are natural tolerances?

Natural tolerances are expectations regarding deviations, represented by control limits set at three times the standard deviation above and below the mean. When in place, the limits demonstrate a 99.73% chance that any given result will occur between the given control limits. So, while it’s possible to have a result outside of the control limits, it should be statistically rare.

Use the following calculations to arrive at the natural tolerances:

For example, the mean for a given process is 20 units, and the standard deviation for the process is two. Using the calculation, you arrive at a natural tolerance that ranges from 26 units to 14 units.

With these values, you can set the natural tolerance for the process: 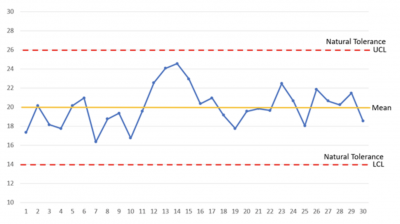 For the graph provided, the natural tolerances are between 26 and 14. Therefore, 99.73% of future values will be between these limits, providing that a special cause does not enter the equation.

The benefits of recognizing natural tolerances

Allow for a high percentage chance for success

While some processes, especially those involving the safety of other human beings, might require even higher success percentages, natural tolerances set up a process with a high chance of success.

While the required quality levels for the process dictate where the control levels are set, many industries’ processes are set to natural tolerance levels.

Help identify when a special cause is introduced to the process

With natural tolerances covering the chances for a result to occur that is plus or minus three sigma away from the mean, identifying when special causes arise in the process becomes a snap.

If the process begins to see that results outside the natural tolerances are a greater rate than 0.27%, it is a signal to begin an investigation to see what has changed in the system. Something outside the norm is occurring to cause a percentage jump outside of the control limits.

Are there times when I don’t want to use natural tolerance?

We discussed in the best practices a case where you wanted to use even tighter values for your control limits than natural tolerance gives, but there are times where you may want to use more relaxed values.

Can I have an upper or lower specification limit that is with my natural tolerance range and still satisfy my customer?

It can be done, but it’s likely to result in higher rework cost. It may even have extremely excessive costs.

When a process is not capable, it doesn’t mean all products will fail, but it does show that there will be a large quantity of product that will not meet customer requirements. These products will require rework or scrap. No company would willingly wish to do business this way, which is the entire point of comparing control limits with specification limits.

The short answer is that you do not stay in business long if your lower specification limits are higher than your lower control limits.

Natural tolerance set a great control level for most processes

Natural tolerance is a fiscally feasible way of setting up common cause failure rate expectations on a process. It sets the upper and lower control levels up for the low failure rate of 0.027%, so that when we see an increase above the expected failure rate, we know it’s time to start looking for special causes.

While it does not work well for every process, like those requiring much higher success rates, for many processes, it’s the sweet spot for economical quality control.