Definition of Special Cause:

Variation exists in every process. To properly manage your process variation, you need to distinguish between the variation caused by the process inputs and that of special causes.

Overview: What is a special cause?

An industry example of special cause

The company’s Six Sigma Black Belt (BB) was helping the manufacturing manager monitor his machine setup time with a control chart. He noticed that at point 65, an upward trend of consecutively increasing times began. This was shown as a series of increasing red data points. The manager was concerned with the increasing setup times since this would have a negative impact on his schedule.

The BB put together a small team of machine operators who identified the reason for the increasing times. Since this was having a negative effect on the process, they made recommendations to reduce the times back to the common cause variation it had been exhibiting. The control chart below shows what the BB was looking at. 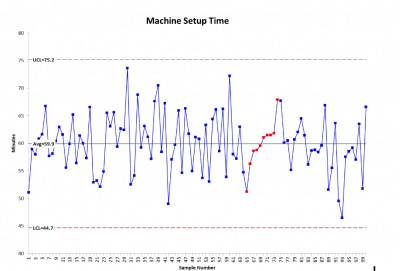 1. How can I determine if my variation is common or special cause?

2. Is special cause variation in a process bad?

It depends. Sometimes a special cause can result in an improvement in the process. You would then want to incorporate the change rather than eliminate it.

3. What should I do if my process shows special cause variation?

Your first action is to investigate to see if you can discover the reason or assignable cause of the unexpected variation, whether it be good or bad.  Next, you should decide whether to eliminate or incorporate the reason depending on whether the process was made better or worse by the cause.