Your process can often be described in terms of quantitative/continuous data or qualitative/discrete data. Understanding the difference in how to analyze and present both types is important for describing your process performance.

Overview: What is nominal data?

Nominal data is a form of discrete data. In statistics, nominal data is used to label variables without providing any quantitative value or order. It is counted, not measured. As an example, you might be interested in categorizing the students in your Six Sigma training class as a function of the departments they work in. You might use such categories as; manufacturing, sales, finance, HR or quality control. You would count the number of people from each department. Since there is no order or preference to the departments, this unordered data would be classified as nominal.

Nominal data can not be analyzed using the common statistical descriptors such as mean and standard deviation since you are counting and not measuring the data. The variables can be grouped together into categories, and for each category, the frequency or percentage can be calculated. The data can also be presented visually, such as by using a pie chart or histogram.

Although nominal data cannot be treated using mathematical descriptors, they can still be analyzed using advanced statistical methods such as hypothesis testing. Nominal data hypothesis testing can be carried out using nonparametric tests such as the chi-squared test. The chi-squared test aims to determine whether there is a significant difference between the expected frequency and the observed frequency of the given categorical counts.

An industry example of nominal data

The HR department of a company was seeking to analyze the educational background of their managers. They provided a list of possible educational categories and collected how many managers fell into those categories. Since there was no order to the categories, they determined the data was nominal and their presentation of the results is shown below. 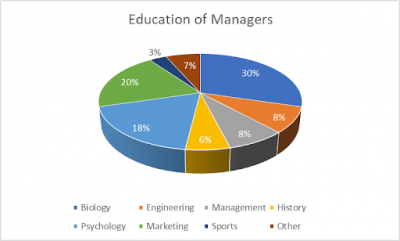 1. How is nominal data different from ordinal data?

As the name implies, the categories of ordinal data can be ordered by some preference or importance. Nominal data also consists of categories, but they are not ordered.

2. What statistical tools can I use to analyze nominal data?

The chi-squared test is often used for analyzing discrete categorical data like nominal.

No. The categories you are using have an order or preference since, depending on the question you are asking, Strongly Agree is very different from Strongly Disagree. This would make your data ordinal rather than nominal.

If you had a question regarding demographics such as “What part of the US do you live in?” and the possible responses were South, Southwest, Northeast, Southeast, West, Northwest then this would be classified as nominal data since there is no order.