It is accepted there is variation in everything you do. If your process is stable, the variation will be predictable and controlled. But, what does that really mean, and how do you measure it? Let’s find out.

Overview: What is a stable process?

A process is said to be stable if the measures of your process parameters have both constant means and variances over time, plus a constant distribution. With a stable process, you can predict your output and measure your process capability.

The charts below show what an in-control and stable process control chart would look like as well as one that is out-of-control or unstable. 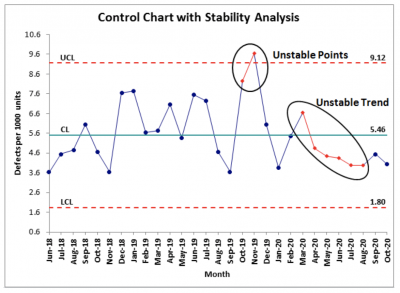 An industry example of a stable process

The finance manager of a medium-sized retailer was concerned about the turnaround time needed to process invoices. Since he had received some Six Sigma training in one of his college courses, he decided to do a quick control chart and see what it told him about his process.

The control chart is shown below.

He concluded that his process was not stable because of the number of out-of-control points. He subsequently formed a small team of finance associates who were able to bring the process into control so it was stable as well as reduce the average turnaround time. You can see that in the second control chart below.

1. What defines a stable process?

A process is said to be stable and in-control if it exhibits common cause variation, where the data points fall within the control limits in a random pattern.

2. How do I know if I have a stable process?

A control chart is used to indicate whether your process is demonstrating common cause variation and can be defined as being stable.

3. Can I determine process capability if my process is not stable?