Definition of X-Bar and R Charts:

All processes vary. The data you collect from your process will vary. But is the variation common to the elements of your process or something special? If your data is continuous or variable data, the X-bar and R charts will tell you.

In this article, we will discuss what the X-bar/R charts are, how they are constructed, their benefits, and best practices for using them.

Overview: What are X-bar and R charts?

The control chart was developed by Dr. Walter A. Shewhart, an American physicist, engineer, and statistician, who is sometimes referred to as the father of statistical quality control.

While employed at Western Electric and Bell Laboratories, Shewhart became aware that operators were frequently adjusted their processes when the process appeared to vary from the nominal value. This constant tampering with the process without knowing whether the variation was due to an assignable cause or the natural random variation existing in all processes was a problem.

Below are some further descriptions and formulas for calculating the values on the X-bar/R charts. 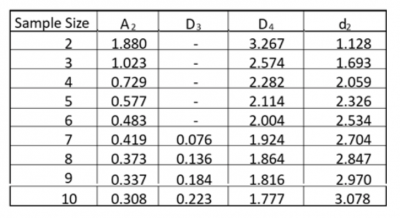 Here are the steps for constructing the X-bar/R charts.

An important consideration in using X-bar/R charts is the selection of an appropriate subgroup or sample size.

Do not create subgroups for convenience. There must be some logic and rationale for the subgroups. Do not artificially subgroup data to dampen or reduce apparent variation.

Once you have constructed your X-bar/R charts, you’ll need to interpret what they are telling you about your process.

Here are the guidelines for interpreting them:

Tampering with a process in statistical control will increase your variation and degrade your quality. The X-bar/R charts will provide the following benefits and keep you from tampering.

1. Know when to intervene in the process and when not to

If your X-bar/R charts give you a signal of special cause variation, you should investigate and react accordingly. Otherwise, don’t chase individual values that seem to be different.

2. Provides a video of the process

The X-bar/R charts show the process change over time. It will indicate what has changed and what has not changed.

3. Easy to understand and construct

Why are X-bar/R charts important to understand?

X-bar/R charts provide valuable information about your process. Understanding what they are telling you is important for taking the appropriate action.

If the X-bar/R charts exhibit common cause variation, then there has been no significant change in the process. If nothing has changed, don’t chase reasons for a single data point that seems different. Focus on improving the process by reducing variation or shifting the average as appropriate. If there are signals of special cause variation, then investigate to try and find the root cause of the change.

Definition of out of control

How you select your sample and how big of a sample you use will have an impact on the value of your X-bar/R charts. Take care to properly define your rational subgroup and collect your data in a manner to optimize the signals your charts will give you about your process.

An industry example of X-bar/R charts

The Master Black Belt (MBB) of a steel manufacturing plant was reviewing the data from the mold coating process. He was perplexed because almost all of the values were 150 microns in thickness, which happened to be the nominal value for the process.

He knew data was collected and recorded by the operator, so he went to speak to one. He was told operators often put down the 150 micron value because any other value would have their supervisor coming over and asking, “What happened?” Apparently, the supervisor didn’t understand the concept of process variation.

The MBB convinced the plant manager to start using X-bar/R charts to monitor the process. They chose to sample the process 5 times an hour for one week. He also got assurance the operators could record the true values without any repercussions from their supervisor.

Below are the X-bar/R charts from the process data. 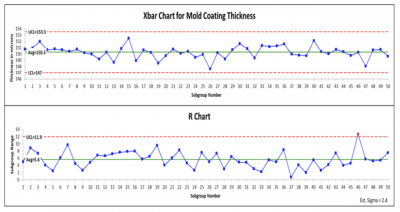 As you can see, except for a single data point on the R chart, the process looks to be exhibiting common cause variation. Chasing a high or low value as exists for point 15 and 26 is chasing the natural variation of the process.

The next step would be to examine the process capability. Using a nominal of 150 plus/minus 5 micros as the specifications you can see the process, while stable and in control, is not capable of meeting the required specs. While the process is centered, an effort should be made to reduce the variation of the process. 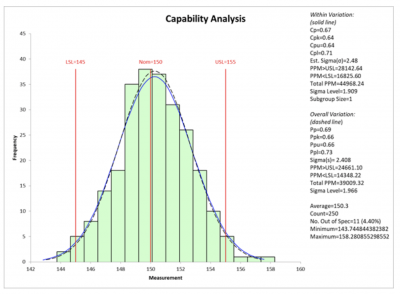 A team was formed to analyze the mold coating process, and it was determined that the flow speed of the powder, air pressure, and nozzle setting needed to be adjusted to reduce the variation.

Collecting the data for an additional week showed the improvement in the process capability. 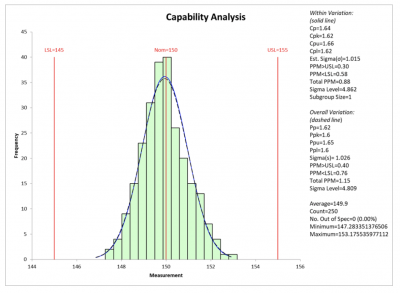 There are many ways to improperly construct and use a control chart. Use these tips to get the most value out of your X-bar/R charts.

Be sure you use X-bar/R charts to monitor the performance of key process characteristics. Don’t make a control chart for the sake of control charting.

One of the best sampling strategies is to use a consecutive periodic approach, where you collect consecutive units from the process (minimizes the within sample variation) on a fixed schedule. For example, grab five consecutive bottles from the line every 30 minutes, and test them for carbonation.

3. Use an X-bar/S chart for larger samples

The use of the R chart for monitoring the range of small samples (<8) is common. The standard deviation (S) is a more accurate representation of the process variation when samples get larger. Use X-bar/S charts where the S is the standard deviation within a sample rather than the R or range.

1. What are X-bar and R charts used for?

They are used to distinguish between common and special cause variation in a process. Using subgroup averages (X-bar) and subgroup ranges (R) of continuous data allow you to monitor your process over time to understand whether there has been a shift in the process average or variation.

2. Why are there two charts?

3. Does the data need to be normally distributed for the X-bar/R charts to work?

No, that is a common misconception. The X-bar/R charts are robust to normality and are designed to be effective over a wide range of different statistical distributions.

X-bar/R charts are one of the most powerful tools in the Lean Six Sigma tool box. The charts provide important information regarding the variation of your process. They are designed to distinguish between common and special cause variation over time. This enables you to properly react to any changes in your process average or variation.