This three-part case study focuses on improving customer satisfaction at two of the company’s diagnostic clinics – Centers A and B. In Part One, the company worked at Center A to reduce patient turnaround time, a defining component of patient satisfaction. In Part Two, the chain’s improvement story focuses on increasing patient delight at Center B. In Part Three, the story returns to Center A.

During one of the meetings held during Part One of this case study, when progress was becoming apparent, one of Center A’s doctors remarked: “You must help us in the laboratory; the internal processes leave a lot to be desired.” At this point the laboratory had already reduced the number of patients waiting for blood sample collection by 70 percent as follows:

What, then, was the problem? 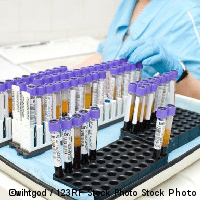 Brainstorming and discussion revealed that while the queues had been dramatically reduced for sample taking, the front office still dealt with patient discontent from delays when the patients collected the test reports. This was corroborated by the pareto analysis of Center B in Part Two (Figure 2) of the case study, where waiting for reports was the second highest customer complaint about Center B – 14 percent of total complaints.

Armed with this knowledge, the team embarked upon a project to reduce the turnaround time of lab reports.

The team applied Lean techniques to this project as follows:

The current-state process is shown in Table 1.

WIP was collecting at every stage as work was processed and moved to the next stages only when convenient to the staff member performing the task. From these observations, it was apparent that random batching was the cause of a large part of the turnaround time of individual reports. Compounding the problem, the batches (of typing, checking, correcting, signing and issuing the reports) were grouped toward the late afternoon and evening; many reports were not ready for patients until the next morning – and sometimes even the next afternoon. In rare instances, some reports took two days to complete (i.e., be ready to be handed to the patient).

Once this process was mapped, the team set a goal of getting reports to patients between 7 p.m. and 8 p.m. of the same day if their blood sample tests were completed before 4 p.m.

As the first step in creating the future-state map, the team examined equipment batching issues, and determined the capacity levels of that equipment and associated personnel. These items are summarized in Table 2.

Ninety percent of all tests fell in either category 1 or 4 (i.e., biochemistry or immunology tests performed on automated machines). Based upon the possible configurations, a repeatable cycle of 60 minutes was selected as the optimum performance level. The question was: Could the tests of all samples collected in an hour (e.g., between 9 a.m. and 10 a.m.) be completed in the next hour (i.e., between 11 a.m. and 12 p.m.) and reports issued in the next 60 minutes (i.e., between 12 p.m. and 1 p.m.)?

The arrival pattern of samples was observed for three days during peak times and is shown in Table 3.

Based on these observations, it appeared feasible to be able to complete the testing of all samples received within 60 minutes. Report preparations and signing/approval were also timed, and the 60-minute timeframe was still doable if the testing results were communicated – and the reports passed on – for approval in a flow pattern rather than in batches.

Running a Trial of the New Process

The green channel run method (all samples collected in an hour) was selected to test these hypotheses. The minimum batch sizes selected, hourly batches, were run without waiting at any stage to see if the reports could be completed in the next two hours. All the personnel in the processing chain were briefed for the trial.

Based on the results, it was determined that for all tests which took less than two hours to complete reports could be issued within that two-hour timeframe. This improved turnaround time would affect more than 90 percent of the patients visiting the clinic and would easily meet the goal set by the team earlier in the project (getting reports to patients between 7 p.m. and 8 p.m. of the same day if their blood sample tests were completed before 4 p.m.).

The longer tests (e.g., microbiology for which the results took a few days to become available) would continue to take longer. Luckily, those tests were infrequent, and patients would be told to expect the reports after the longer appropriate timeframe.

The new cycle for processing tests and reports was run for longer and longer durations each day as any glitches were worked out and the staff gained confidence in the new process. Ultimately it became the default process for each day and proved to be highly effective and popular among the staff – it finished the work and left minimal WIP, relieving pressure on all clinic employees.

The improved process was implemented across the center; the results are evident in the improvements shown in the figure below.

The average number of satisfied customers increased from 10 to 12 per day while the complaints dropped from 2.7 to 2 per day. This was attributed to the reduced time patients spent waiting for reports.