This article will explore what normality is and how the value of A-square can be used to confirm whether you meet your normality assumption. We will also explain the benefits of the A-square calculation as the output of the Anderson Darling Normality Test (AD) and offer a few tips for understanding when and how to use A-square.

What you are really confirming with the AD test and A-square is whether the distribution of your data is close enough to normal you can state you fulfilled the normality assumption to use your selected statistical tool for analysis.

The formula for the test statistic A-square is:

Here is an example of a probability plot that provides the results for A-square. 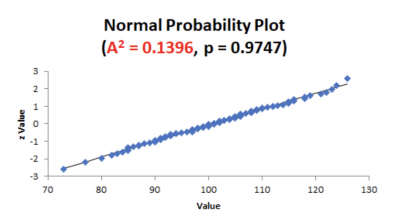 Let’s look at another example. 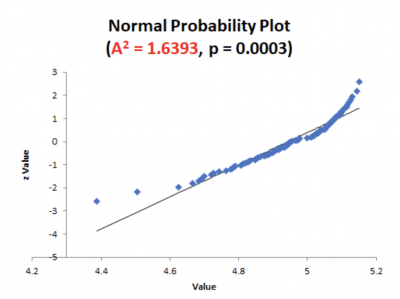 This time, notice that the p-value is 0.0003 based on the A-square value of 1.6393. You would now reject the null hypothesis and conclude your data is different from normal.

Should you or shouldn’t you reject the null hypothesis concerning the normality of your data? A-square provides the answer to that question.

1. Provides guidance for your decision

A-square is used to calculate your p-value. This will provide guidance on whether to reject or not reject your null hypothesis.

Fortunately, you will not have to do the complex hand calculations to determine A-square. Today, computer software is available to provide you a graphical picture of the data along with the A-square and p values. This information will give you confirmation about the distribution of your data.

3. Confirmation of the shape of your data

Why is A-square important to understand?

The p-value, calculated using A-square, will tell you whether you can reject your null hypothesis or not. It’s important to know the relevance so the next action you take is appropriate.

The impact of sample size

The value of A-square will vary as a function of the size of your sample. As your sample size gets large, the sensitivity of your AD test may tell you the data is non normal when, in reality, it is. Don’t rely on graphs except as a directional indicator. Rely on the A-square and p-value to tell you how to react to your null hypothesis.

The relationship between A-square and your hypothesis test

The AD test is a form of hypothesis testing. The AD statistic, also denoted as A-square, provides you the information on what decision to make about your null hypothesis.

An industry example of A-square

He decided to consult with his Lean Six Sigma Black Belt, Barbara, on how to analyze the data.

Barbara advised that, since the manager was interested in comparing four sets of continuous data, the appropriate test was ANOVA. An underlying assumption is that the sample data for the four sales offices will be normally distributed.

Upon checking the normality of the data with the Anderson-Darling test, Barbara found the data not to be normally distributed. Therefore, she was not comfortable just doing the ANOVA test even though she knew her sample size was pretty large and ANOVA is somewhat robust to the assumption of normality.

She decided to use the nonparametric Mood’s Median test, which does not have an assumption of normality. In the end, the p-value computed from the AD A-square calculation and the p-value of the Mood’s Median test led to the same conclusion. The results showed that the revised incentive plan was statistically effective for two of the four offices. The sales manager went to work trying to understand why it didn’t work in the other two.

3 best practices when thinking about A-square

Here are a few tips to help you gain insight into using A-square to confirm the distribution of your data.

1. Use graphics and charts

While graphics are best used as a directional indicator, sometimes a simple plot of the data such as a histogram or probability plot will provide useful insight into what your data distribution might be. You should use statistics to confirm any visual conclusions.

Your sampling technique and sample size will impact your final calculations and decisions. Random sampling is used to reduce the amount of sampling bias you might have.

In the event your data is not normally distributed, don’t despair. In most cases, there are alternative statistical tools you can use to help you get the answer to your statistical questions.

1. What is the difference between the Anderson Darling Test and A-squared?

The actual test for identifying the type of distribution was named after Theodore Anderson and Donald Darling. A-square is the test statistic or formula used to calculate the Anderson Darling value. This value is then used to compute the p-value, which provides the necessary information on whether to reject or not reject the null hypothesis associated with the Anderson Darling Test.

2. Can the value of A-square be used for distributions other than normal?

Yes, while the AD test and A-square are commonly used for testing the assumption of normality, the AD test can be used for any distribution.

3. Are there other tests for normality besides AD?

Yes, there are a number of other tests. One of the more popular tests is the Kolmogorov-Smirnov (K-S) test. Other commonly used tests are the Ryan-Joiner and Shapiro-Wilk tests. Each of these tests has its own test statistic that’s used to compute p-value.

Many statistical tools have an underlying assumption that your data needs to be approximately normally distributed. If it’s not, you must seek a different tool to answer your statistical question. The good news is many of the tests requiring normality are robust to that assumption. In other words, your eventual answer won’t be too different if you violate the assumption of normality.